When did Charles Manson become a suspect?


According to Bugliosi, Charlie did not become a suspect until mid-October at the earliest, when his name popped up in the Hinman murder investigation:

pg119
Nov 12, 1969:  Al Springer names Manson as a TLB suspect in an interview with LASO detectives. 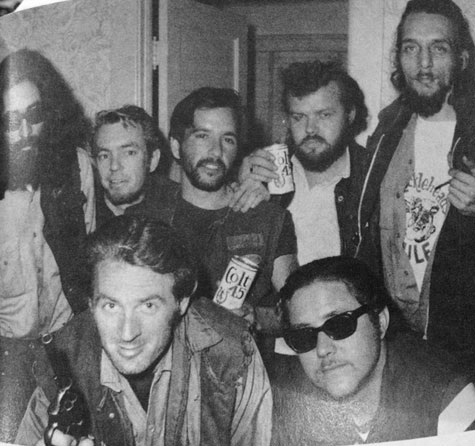 Al Springer(left front)  Danny DeCarlo(middle rear)
(One Slave to supply the weapons and speed, and another Slave to rat
them out.  Maybe we should call them "the Sheriff's Slaves")


The Tate detectives, in the person of Sgt. Jess Buckles,  famously missed their big opportunity to close the Tate case early after they ignored evidence given to them by Hinman homicide investigator Whitely on Aug 10, the day after the Cielo crime scene was discovered.  But the LaBianca investigators were apparently also incompetent:


Bugliosi, pg101
"One of the LaBianca detectives would later admit that he and his fellow officers should have checked with LASO homicide detectives in mid-August to see if they had any similar murders.  But it wasn't until October 15, after most of their other leads had evaporated, that they did so."

So the LASO Hinman homicide detectives Whitely and Guenther DID approach the Tate detectives the very next day on Aug 10nth with their suspicions, but no one saw the similarities in the LaBianca case until nine weeks later.  Hmmmm....  Methinks Charlie wasn't the only one doing the "me-so-stupid" routine.

This poster expressed it perfectly:

www.blogger.com/comment.g?blogID=14352935&postID=114602876191845153
by the commentator "Joe"
"...After the LASO Homicide investigators went to the Tate autopsy to tell them about their nearly identical crime scene in Topanga and that their main suspect was currently in the slammer, but lived with a bunch of hippies at the Spahn Ranch, led by a guy who thought he was Jesus, why the hell didn't they go directly to the ranch to question said hippies about the Hinman murder?
... they stayed away from it like it was a quarantined government facility.
And the raid of the (Aug)16th, if we're to believe the "official story" was carried out by LASO cops who weren't even aware of the Hinman death or the suspicions held by their colleagues at homicide about Manson.   Something's missing here. Anyone got an idea what?"


There are, however, other indications that they knew about Charles Manson much earlier than they claim:

pg120 (source is an interview with Geffen)
"The city of Los Angeles was shaken on August 9 when a hit team led by a psychopath and aspiring songwriter named Charles Manson stormed the Beverly Hills home of movie director Roman Polanski, killing his pregnant wife, actress Sharon Tate, and four of her guests.

"The next day, Geffen visited his friend Lou Adler, who had a house at the end of Carbon Beach, a fancy stretch of sandy property in Malibu. Geffen and Adler walked along the beach but stopped when they came upon Terry Melcher and his girlfriend, actress Candice Bergen. They were standing in front of an elegant beach house owned by Melcher and his mother, Doris Day.

"Geffen and Adler listened as a frightened Melcher and Bergen told them that they suspected that they might have been the murderer's real targets. Melcher, who was an independent producer at the Beatles' Apple Records label, had auditioned Manson but opted not to record him; what's more, until just a few months earlier, he and Bergen had lived in the house where Tate and the others had been murdered."

If Melcher and Bergen already suspected "the next day" that they were the real target, they must have had a pretty good idea who the suspect was.  Did they ever go to the police with their suspicions?    (Melcher was not officially interviewed by cops until late November.)


--Charles Manson is the subject of an FBI memo, dated Oct 24, 1969, from the SAC(Special Agent in Charge)/Los Angeles to the office of the Director of the FBI, which states:


vault.fbi.gov/Charles%20Manson/charles-manson-part-02-of-02/view   pg120
"It is reported that on or about 7/2/69 subject purchased a short barrel and a nine millimeter hand gun at Van Nuys, California."

This is the first I've heard Charlie buying two handguns.  At any rate, this implies that Charlie was being surveilled as early as July, 1969.


--Officers were already asking Dennis Wilson about the Bernard Crowe shooting in July or August of 1969, so by this time they probably knew all about Charlie's involvement in that attempted murder case:

www.mansonblog.com/2017/01/when-did-dennis-wilson-finally-sever.html
Cielodrive.com said...
"From the progress report... She[Stephanie Schram] stated that she had gone with Manson to the home of DENNIS WILSON at 14000 Sunset Boulevard, West Los Angeles(in August 1969). While at the Wilson residence, there was a conversation between Manson and Wilson regarding a man who died from a gunshot wound to the stomach. Dennis Wilson was interviewed by officers from an unknown police agency about this matter. During the conversation, Manson indicated that he had been the one that had killed the unknown person."

pg315
"Helter Skelter takes the LAPD to task for failing to follow-up a lead that might have exposed the Manson "family" earlier--a lead based on similarities between the deaths at Cielo Drive and that of Gary Hinman, a music teacher murdered ten days earlier, also by Manson's followers. Bob Helder was well aware of this however. He told me, very soon after we first met, of a possible lead involving a bunch of hippies living in the Chatsworth area under a commune leader, "a crazy guy who calls himself Jesus Christ." "

"Very soon" probably meant in the first week, so they already had Charlie in their sights for the Tate murder by then.  But they never followed up on this lead?  Of course they would have.


So the question becomes "Was someone ordering cops to 'go slow' in their investigation?  And why?"

By the evidence, it does looks like the investigation was being hindered.  As to the why, there may have have been several reasons:

--the covert operators couldn't make up their minds whether to pin the blame on the Panthers or the Hippies, until they went with the Hippies

--they wanted protracted trauma and drawn-out fear from the public to maximize the desired outcome of "hatin' on the hippies and lovin' on the Yorty/Reagan/Nixon law-and-order administration."   Elections were less than a year away.

Though of course these questions can never be settled conclusively.  And some say if you linger too long on these mysteries, you risk talking yourself into a circle of madness.

Special Thanks to DebS for her help compiling this thread!