The same day that Chief John Knox filed his report on the Manson Family Sergeant William Gleason filed his own report. While there is much the same information in the Gleason report as the Knox report there are also some little nuggets that bear discussion.

Taking both reports into consideration I have a hard time believing that there were one or more government placed informants.  It seems to me that there were enough young female runaways who were more than willing to speak to the police after their stay at Spahn Ranch. These girls stayed just a few days or sometimes a few weeks but were savvy enough to get the hell out of there and back to their parents. I'm sure their moms and dads never looked so good after getting a taste of communal living.

The girls apparently told their parents all about Spahn Ranch and Charlie Manson and in turn the parents went to the authorities to report the situation. Contrary to Manson's edict that the kids at the ranch were throw-aways whose parents didn't care about them, these parents had filed missing persons reports and actively looked for their kids. One mother went so far, in the Knox report, to personally confront Charles Manson at Spahn.

If you consider the information given by the girls, and confirmed by police after their own investigations, and the number of times that law enforcement was called to Spahn in the spring and summer of 1969 it's no wonder that they were well aware of the activities taking place. You can tell by the dialogue in the report that the teenaged girls were considered informants. There was no reason to embed an informant at Spahn Ranch.

That's not counting the investigation of the car theft ring that had information coming into them from numerous businesses in the area. The neighbors around Spahn Ranch also contributed to the intel gathered by law enforcement.

There is more than enough documentation about all of these events that casts doubt that there were any covert operations by the CIA or any other government agency. The Family members, by their actions and deeds, essentially informed on themselves.

Also, in this report you will read about the large sums of cash that Manson used to buy dune buggies and parts. A report that Sadie was cashing $3,000.00 checks at a local bank. If true, this was likely checks that Juanita Wildebush would have received from back east. As a point of reference, $3,000.00 in 1969 translates to $24,218.75 in today's dollars. Great! The Family members were eating out of dumpsters and dressing from a communal pile of clothes but, by golly, Manson had the cash to buy dune buggies.

This report again mentions a Venice Riot where a Negro had his ear bitten by a Caucasian male. Funny that when I went to look this up, the newspapers referred to the riot as a Love-In. There is really no indication that any Family members or Black Panthers attended this Love-In/Riot but since there were 7,000 in attendance it can't be ruled out. Lots of arrests though. 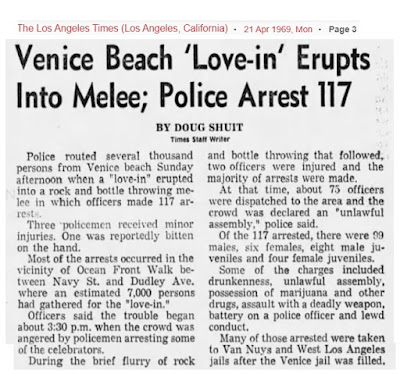 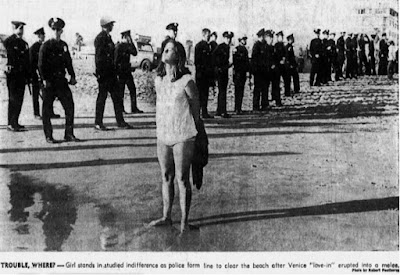 Before I forget, a small thing. If you look on page four of the report, third paragraph from the bottom, Gleason writes, "The subject was told by Manson that once she joined the "Family" at the ranch she couldn't leave the ranch." Huh? I thought Manson insisted that they never referred to themselves as the Family, that was a label laid on them by the press or something.