Irving Kanarek, 94, practiced law in California from 1957-1989. He represented Charles Manson, who was convicted in 1971 of conspiracy to murder actor Sharon Tate and six other people. He also defended Jimmy Lee Smith, convicted of abducting and murdering an LA police officer in 1963, a case immortalized in the book The Onion Field.

I would defend a client who I knew was guilty of horrific crimes. They have to be proved guilty. I've had cases where people were guilty as hell but they couldn't prove it. And if they can't prove it, he's not guilty. In that case, the person walks free. That's American justice.

I got a reversal of Jimmy Lee's death sentence, and he had been accused of killing a police officer. That made me the victim of police non-objectivity. They pulled me over, gave me tickets undeservedly.

It wasn't a difficult decision to take the Manson case. My purpose was to fight legally admissible evidence, and the amount of that was scant. His guilt was based on a few hearsay words, inadmissible in court, that he supposedly told this guy to do a number on the Tate residence. No question he was legally innocent. And, more than that, he was actually innocent. There was no evidence connecting him to those murders.

The newspapers, the magazines, the motion pictures got people all excited – Manson as the embodiment of human evil. Charlie wasn't a monster. When you look at the legally admissible evidence, you come to a very different conclusion. Just looking at him from objective considerations, he's a personable person. 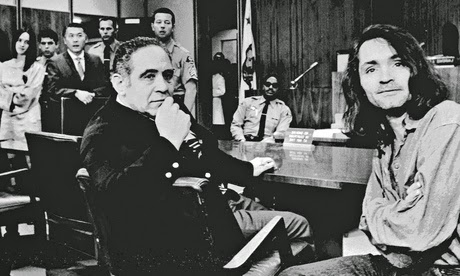 I've thought a lot about the case in terms of the legalities. I haven't dwelt much on the human tragedy of it. There's a lot of myth, for example that the baby was taken out of Tate's body. Not so. The wounds were not in the abdomen. The wounds were primarily in the breast area.

I didn't spend much time [thinking about Tate and the other victims], because they were victims of disputes that Charlie had nothing to do with. I think his direct involvement has been woefully extrapolated.

By the time I visited the house, the bodies were gone. The scene was what I'd call mechanical. Nothing about it was gruesome, per se. They'd marked where they were in chalk. So it isn't as overwhelming as some people may feel. None of it stayed with me. The tools of the courtroom make such scenes less than human. I didn't think about it emotionally. The victims are part of the case, but are not that tangible. I lost sleep on other cases, but not on this one.

People ask me, have I ever felt in the presence of evil, I don't know how to respond to that. I don't dream or even think much about Charlie.

I have regrets about every case where someone is killed or injured. Murder is unappetizing. But I've never defended anyone who's been accused of horrible criminal acts on children.


Hat tip to Emily, a regular reader of the blog (or something like that).