Did Manson Return to Cielo Late on August 9th??? 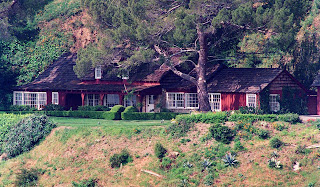 In a previous thread, Starship & I were debating whether or not Charles Manson may have returned to Cielo the night of the murders. My response is too long for the comments, so here it is:


Short of Bruce Davis taking a polygraph when he's paroled and writing a million dollar tell-all book, you can't disprove the theory nor prove it.

You can make anything fit any scenario if you try hard enough. I think the evidence easily supports many scenarios.

My opinion? No, Manson didn't go to Cielo that night...

The first logical question I have to ask is why would Manson put himself at the scene of the crime hours later not knowing if the police were notified of the crimes through reported screams and gunshots - and supposedly, Watson told him it was total chaos. It's a HUGE risk factor - especially when Manson had worked so hard to distance himself from the murders (and I believe the girls were always intended to be the fall guys). There is only one way in and out of the Cielo house. If the cops arrived while Manson had returned to "see what my children had done" he was trapped. Sure, he could run down the hillside, but what about the car left behind - even at the bottom of the cul-de-sac. And, chances are, he would have gotten caught in a foot chase - he's short and short legs get caught.

If the crime scene were at the corner of Hollywood and Vine, busy with people and a gazillion escape routes, maybe, but not at the Cielo house. Even if Manson scouted the opposite side of the canyon on Beverly Grove to see if there was any activity at the Cielo house he was at risk of getting caught--these are basically deserted, just shy of one lane, dark neighborhood roads in the middle of the night. If the cops had been alerted and arrived at Cielo, a car (containing Manson/Davis, Manson/Pitman or which ever version you are thinking of) would have been easily detected from almost any sight access to Cielo and could have been pursued as suspect by the police - especially an old POS Ford  Fairlane in Beverly Hills.

The next logical question I have to ask myself is if Manson returned, why would he cover Jay's head with a towel? According to experts, covering a victims head is done for only a couple of reasons: Avoid identifying the perpetrator, keeping a victim from knowing a location, or the fact that the killer knows his victim and uses a cover to depersonalize the victim. None of those reasons fit Manson (or Davis) covering Jay's head - But, think about who might have one of those reasons and who did cover the LaBianca's heads the next night.

Starship wrote: And, no one ever accused CM that he went up there after the murders. He offered up that info himself...more than a year later too I believe? It is only with that premise in mind that the scene that was found in the daylight makes any sense at all.

I may be wrong here, but I thought Manson admitted going to Cielo in Emmons' book which was years later and a lot of speculation on blog sites. Did he state it in another interview just a year after the murders?

Starship wrote: And the tales the killers tell, which are consistent enough, don't explain it all either.

The biggest problem with this for me has always been that everyone assumes all the killers agreed and testified to the same account. But the reality is that Atkins was the only one (early on) to give a statement of facts (to Bugliosi & the Grand Jury) to what transpired inside the house. Her account then hit the international news.

It wasn't until after the trial and verdicts that Watson spoke his first words about what happened inside the house at his own trial a year later when both Watson and his attorney heard what Atkins testified to, what Kasabian testified to, etc which gave him his diminished capacity defense and an easy series of events to mimic and manipulate for his own sake - same for what he and or his author wrote in his book.

Then there's Krenwinkel who tells her version years later at a parole hearing when she basically takes on the role of Kasabian and then lies every year after until she finally comes "clean" and gives Atkins' statement of events, but at that point, she can hardly remember which victims were where and at times, doesn't even remember the victims names.

Then, you have Kasabian testifying to what happened, but she never entered the house and could only testify to what happened outside for a very brief window of opportunity. AND, the biggest question for me in her testimony is that the blood evidence doesn't support her testimony either - She said Woytek came out onto the porch drenched in blood with Watson stabbing him and hitting him over the head with the gun. He hung onto the post for an extended moment - enough time to look her in the eyes and plea for help before tumbling into the bushes - yet there was no blood evidence of Woytek's collected from the front porch or (for that matter) what would have been his path from the living room leading to the front porch.

So, saying that they all "agreed" on what happened during the commission of the crimes is a non-starter. I think they all (lawyers, writers, etc) just later mimicked what Atkins originally said and used it to their advantage. And we all know how many times Atkins changed her story about what happened inside the house.

Other points Starship made:

IMHO the trunks were stacked in an orderly fashion against the inside wall of the living room and knocked over and into the position they were found during a fight with one of the victims - easy explanation - it's just the way the cookie crumbles. If they'd been ripped open to look for drugs they would have been flat on the ground--and did the killers really take the time to repack Sharon's belongings in them and then set them at an odd angle?

The blood smears on ST body

Again, in my humble opinion those smear marks on an exposed body could just as easily be consistent with a struggle while she was being stabbed. Her hands, the killers hands, the carpet, etc all causing swirling marks on the skin making it appear that she was moved--and she was, just not by Manson hours later. It could be just as easily explained that Sharon was on her stomach for a  period of time, then pushed back by Atkins to dip the blood in her chest blood. It's as plausible a scenario as dragging Sharon to the front porch and then returning her to the living room.

The killers not wiping anything down but then it's pretty well wiped.

Actually, it wasn't pretty well wiped because they got 2 fingerprint matches. Any cop will tell you that the odds of lifting a fingerprint from a crime scene are really low even in an un-wiped house. Yet at Cielo they got lucky enough to find two. Chances are, Cielo was never wiped down for prints. Watson realized his mistake (as did Atkins when she told the inmate she left a hand print on the desk at Cielo) and made the effort to wipe down the LaBianca's

A mystery for all time. But lets remember that hundreds of people were in this house in the time between Sharon & Roman's residence from February through August. Those glasses could have been left in the house at any point by anyone and knocked under a piece of furniture or whatever. Months later they were kicked out during the commission of murders as furniture was bumped, victims scrambling on hands and knees reaching for anything to grasp. Again, just as competent and explanation as Manson/Davis leaving them as a false clue.

The blood map. How accurate is that blood map? We know that Granado did a crappy job at the scene on the blood analysis even from Bugliosi's perspective - he often didn't sub-type or even type at all, missed many blood spots, or made an assumption that a blood spot was the victims' due to vicinity. Sloppy, sloppy work that makes for great (eventual) conspiracies.

I'm not saying absolutely that someone didn't return to that house, I'm just playing the devil's advocate and saying that sometimes evidence can be manipulated into any scenario, one as plausible as the other to suite one theory or another. One thing that we know for sure is that LAPD did a really crappy job of first securing the scene and then processing it, leaving more questions than answers and opening the door to many conspiracy theories.