The long awaited Dianne Lake book "Member of the Family" 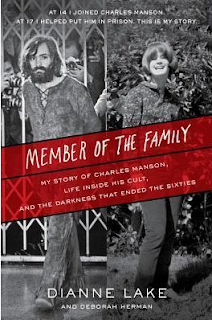 The media has ramped up it's game on this book with television appearances, magazine articles and plenty of website hits.  We are all looking for answers to the unresolved questions about the murders and the Family.

Kirkus Review  did a piece on the book a few weeks ago and the book did not rate very high with them.  The most damaging things they had to say were,  she turns in a memoir that is courageous in spirit but long on self-justification and though firsthand, a minor addition to the literature surrounding the Manson cult.

Not knowing how well Kirkus Review knows the subject it's hard to say if this is a definitive review, just be warned that Dianne's book may not meet your expectations.  The book is not due to be released until the 24th and I have not read it, yet.

Dianne will appear on Good Morning America and on Nightline on the 24th according to HarperCollins, her publisher.  Both shows are on ABC.

Then on the 25th Dianne will appear on DR.PHIL.  This hour long show promises to be a more intimate look at Dianne and a way to get a feel for her personality, believability and sincerity.  We will update this post with a direct link to the broadcast once it is uploaded at their website.

Please check your local listings for time and channel if you want to watch in real time or record the show.


HERE'S A LINK TO DIANNE'S INTERVIEW WITH DR. PHIL.  It is posted in six different videos. 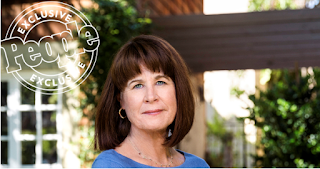 The first PEOPLE article to hit the 'net.

Though it’s been more than 50 years since Dianne Lake was a teenager in the Los Angeles area, deep into the counterculture of the 1960s, there’s one memory that stands out to her more than the others: the first time she met Charles Manson.

“He was extremely intelligent,” Lake, now 64 and living outside of L.A., tells PEOPLE. “He had the incredible ability to pick up on other people’s weaknesses and their needs and their desires, and he could fulfill those.”

It’s a skill Manson turned to deadly ends, as Lake would learn.

For the first time in 47 years, she is breaking her silence about living with him and being the youngest member of his cult, the so-called “Manson family.”

In Member of the Family, a new book out Oct. 24 and exclusively excerpted in PEOPLE, Lake details her experiences falling under Manson’s spell — and, eventually, how she was free of him.
In 1967, at the age of 14, Lake navigated through communes and love-ins after her parents, a homemaker mom and former-Marine-turned-artist, “dropped out” of society and gave her a note granting their permission to live on her own.

A few months later, she met up with Manson at a party in Topanga, California.
“I needed love and affection, and I needed a family. I needed to feel like I belonged somewhere,” Lake says. “And he perceived that from the get-go.”

For two years, Lake found herself increasingly loyal to Manson, even as he grew more paranoid and violent leading up to the days in 1969 that would terrorize the country.

Beginning on Aug. 9, 1969, over the course of a two-day murder spree (which Lake did not take part in), Manson and members of his cult killed seven people: Abigail Folger, Wojciech Frykowski, Leno and Rosemary LaBianca, Steven Parent, Jay Sebring and Sharon Tate.

A year later, at age 17 and after being institutionalized, Lake found herself in front of Manson once again — this time in an L.A. courtroom, testifying against him and others of his “girls,” including Susan Atkins and Leslie Van Houten.

“He just looked crazy, but I was able to look at him,” Lake says. “I had been pretty deprogrammed at this point, so I felt pretty safe.”

But many of the women, whom she had considered friends while they lived together, were still supportive of Manson throughout the trial.

“The girls with the Xs on their foreheads? That part always blew me away,” Lake says. “They continued to hang on, be groupies.”

Once the trial was over and first-degree murder convictions were returned against Manson, Lake tried to move forward with her life — marrying, raising three children and earning a master’s degree in education.

After 47 years, she finally felt ready to speak out.
“It’s an interesting story, but it’s also a cautionary tale,” she says. “I hope that my story sheds a little light onto this very dark time.”

A second PEOPLE article which includes a video not posted here.

Inside the Moment the Manson Family's Youngest Member Learned the Cult Was Slaughtering People: 'I Was Horrified'


While the country was still reeling from the news of a two-day murder spree across Los Angeles that left seven people dead, a then-16-year-old girl named Dianne Lake was learning first-hand details about the 1969 slayings that would change her life forever.


“I was shocked. I was horrified,” recalls Lake, now 64, about the night she listened to Susan Atkins, Patricia Krenwinkel and Leslie Van Houten discuss how they committed murder for their cult leader, Charles Manson.

Lake was not a participant in the violence. For the first time in 47 years, she is breaking her silence about growing up in the 1960s counterculture and how she wound up as the youngest person living with Manson and his so-called “family.”

In Member of the Family, a new book out Oct. 24 and exclusively excerpted in this week’s issue of PEOPLE, Lake details her experiences as a young teenager falling under Manson’s spell — and, eventually, how she was free of him.

It would take months after the slayings before police connected Manson and his followers to the gruesome murders of Abigail Folger, Wojciech Frykowski, Leno and Rosemary LaBianca, Steven Parent, Jay Sebring and Sharon Tate.

At Barker Ranch, a couple of hours outside of L.A. where the group was laying low, Lake could sense a change in the group’s mood.

“You have the [Beatles’] White Album, throw in a little acid and drugs and a little Scientology and the Bible and stir it all up with a madman being the dance master,” she says. “It just went crazy. It escalated into horrible chaos, and I’m so glad I was not a part of it.”

A year later, at age 17 and after being institutionalized, Lake found herself in front of Manson — this time in an L.A. courtroom, testifying against him and some of his “girls.”

“He just looked crazy, but I was able to look at him,” Lake says. “I had been pretty deprogrammed at this point, so I felt pretty safe.”

Once the trial was over and first-degree murder convictions were returned against Manson, Lake tried to move forward with her life — marrying, raising three children and earning a master’s degree in education.

Now she is sharing her story.

“I think the biggest burden was keeping it a secret,” Lake says. “I survived and prevailed during this dark time.”