The Story Of The "Helter Skelter" Door

"The "Helter Skelter" door found at Spahn Ranch. Although the words Healter Skelter had been found printed at the Labianca residence, its importance was missed." -- from Helter Skelter

The famous "Helter Skelter" door was featured prominently in Vincent Bugliosi's (with Curt Gentry) Helter Skelter as evidence of both the term's supposed importance to the "Manson Family" and of the ineptness of the Los Angeles Police Department. In his book Bugliosi recalls his discovery of the door and his frustration with incompetent cops:


On May 25 [1970], I was going through LAPD's tubs on the LaBianca case when I noticed, standing against the wall, a wooden door. On it was a multicolored mural; the lines from a nursery rhyme, "1,2,3,4,5,6,7 -- All Good Children Go to Heaven"; and, in large letters, the words "Helter Skelter Is Coming Down Fast."
Stunned, I asked [LAPD Sergeant Manuel] Gutierrez, "Where in the hell did you get that?"
"Spahn Ranch."
"When?"
He checked the yellow property envelope affixed to the door.
"November 25, 1969."
"You mean for five months, while I've been desperately trying to link the killers to Helter Skelter, you've had this door, with those very words printed on it, the same bloody words that were found at the LaBianca residence?"
Gutierrez admitted that they had. The door, it turned out, had been found on a cabinet in Juan Flynn's trailer. It had been considered so unimportant that to date no one had even bothered to book it into evidence. (Helter Skelter, page 399, early paperback edition)


"Helter Skelter Is Coming Down Fast" might be sinister enough (more sinister, perhaps, than "Love," "Peace," "Elves," and "Happy"), but there are two other inscriptions on the door that are also of interest to us. One is the quote "1,2,3,4,5,6,7 -- All Good Children Go to Heaven" and the other is "Hi Collie I love you."

Going by Bugliosi's account of events, the first quote shows how Bugliosi was either unhip or deliberately misleading, because while the line might have originally been taken from a nursery rhyme it is here likelier a quote from the ending refrain of the Beatles song "You Never Give Me Your Money" from the album Abbey Road. The Abbey Road album was released on 26 September 1969 in the United Kingdom and on 1 October 1969 in the United States. Therefore the writing on the door had to have been done later than early October (and earlier than when the door was picked up by the police on November 25, 1969).

But who was still at Spahn Ranch after the beginning of October, 1969? Hadn't the "Manson Family" retreated to the desert by that time?

Not all of them. Many "Family members" and associates did not go to the desert until weeks after the first mass exodus from Spahn Ranch. Among these latter was Sue "Country Sue" Bartell, who stayed on at Spahn's.  And it was Sue Bartell who was responsible for the infamous writing on the infamous door. (Bartell would eventually be arrested in Death Valley during the same law enforcement sweep that picked up Charles Manson on October 12, 1969.) 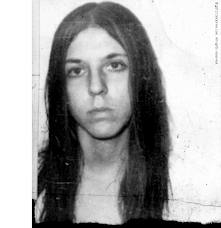 In a May, 2000 interview Bartell recalled, "I didn't go [to the desert in the fall of 1969], but everybody else did. Which meant that there was nobody left to take care of George, take care of the horses, take care of the ranch that Charlie loved. And he left three of us girls behind and four of us boys behind [at Spahn's]. And that would have been Cappy and me and another friend of mine from the valley, Coleen --  Collie. Collie Sinclair. Her and I were the authors of the infamous cupboard door, that said 'Helter Skelter' on it. We were writing down the words to a song we liked. Period. Nothing scary."

And therein lies the significance of the second quote, "Hi Collie I love you."

The evidence of the door itself (the reference to Collie Sinclair and the inclusion of a line from a Beatles album that was not released until October 1, 1969) corroborates Bartell's version of its decoration, namely that it was done two months after the murders by people who had no involvement with those murders. Thus, the evidentiary "importance" given the door by Assistant District Attorney Bugliosi was somewhat muted. Perhaps that is why, aside from the two notations above from Helter Skelter, there is never any further mention of the "Helter Skelter" door.

(But as a PS, does anybody know what happened to it?)