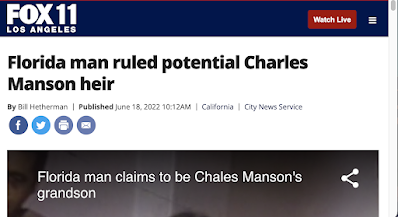 Jay White's 1986 missed family court date in Ohio remains the linchpin in Jason Freeman's control over the Charles Manson estate. I'm holding out for a hero but things are not looking splendid for those in favor of keeping whatever Freeman has planned for his "grandfather's" memory from happening.

Boutique pricing on bone chips sifted from his not grandfather's ashes perhaps. Maybe Freeman could run an endless fake ashes promotion like they do for Saturday night pancakes in Jersey roadside diners. The possibilities are seriously limitless if a dreamer dares to dream.

Crispy bacon with my pancakes, please.

I'm not sure why I'm so obsessed with this Manson estate hearings sham. I think Channels' will is up next if you're also following along from home. Back when they showed trials, I was a huge Court TV fan. Ruben Garcia is my Ito now. I read everything he says slowly and twice.

You gotta understand I'm no lawyer. Not even from Torrence. Lawyers answer my stupid questions though. Some even after my first email. I rail why why why can't the not guilty family of a guilty man lay their blood kin to rest without outside involvement? Isn't life hard enough?

The responses always come back with laughing emojis and links to Smokey and the Bandit. "Because he's thirsty, dummy."

Some nights when I attempt to listen to a sweet-voiced angel in my Airpods, an angry man rants about beating the crap out of this or that person in the Manson scene if they ever fought. Sadly, that guy and most every other guy in this health club ain't got a shot against Freeman. I've noticed bullies kinda circumvent all of that by acting nice around the people they know will whoop them. Maybe you've noticed too.

The pill is bitter but Jason Freeman will kick your ass and there's no two possible endings to the confrontation. You're better off hopping on board if you ask me. And plus sometimes it's safer to call pretty girls fat instead, amirite?

A small tidbit I thought I'd share from my recent creepy crawls. Maybe you know this already because you're the top insider of all insiders but here goes for the rest: Charlie was on ice for so long the coroner offered to cremate his decomposing body. Brunner and Roberts said go for it. Only Freeman refused. That's love right there. Send Netflix to his house.

Speaking of Netflix...you know about this, right? You can tell me your favorite EAP song in the comments if you like. Mine is probably I Want You, I Need You, I Love You, but I have a lot of favorite Elvis songs tbh.

Since we're all so open and honest with one another here, I'll share that I helped a lanky, big bosomed gal make a baby in the hotel with the guitar-shaped pool across the street from Graceland. Our baby went on to become the first person to hot air balloon jump into the Badlands at night during an electrical storm, and also the second Irish-American champion of the World Bocce Ball League. True story. Gabbagool.

Oh! I almost forgot. When I was messaging around about Freeman this past weekend, someone close to the action informed me an offer was made to Freeman via the lawyers (this was back when Freeman was claiming he wanted to spread Manson's ashes at sea) where Pooh Bear himself would rent a Cali boat ride so he and Freeman could dump Charlie over the side after saying their goodbyes.

We're not like those animals, Judge Garcia. Look into your heart.

One of themselves, even a prophet of their own, said, the Cretians are alway liars, evil beasts, slow bellies.