It was announced by TMZ that Charlie passed away at 8:13 pm Sunday.  Debra Tate was the source.  She was contacted by prison authorities upon his passing.

Charles Manson -- the man who masterminded one of the most heinous murder sprees in American history -- is dead  ... this according to the sister of his famous victim.

Debra Tate tells TMZ she received a call from the prison telling her Manson died 8:13 PM Sunday.
We're told the prison is contacting all of the victims' families.
Manson was recently wheeled into Bakersfield hospital and escorted by 5 uniformed cops. Our sources had said at the time, "It's just a matter of time." He was covered in blankets and looked ashen in the gurney.

TMZ broke the story ... Manson was taken from Corcoran State Prison to the hospital back in January where he was being treated for intestinal bleeding.
As we reported ... Manson was supposed to undergo surgery but it was deemed too risky.
Manson has been locked up since his arrest in December 1969 for the Tate-LaBianca murders. He was convicted of conspiracy to commit the slayings, which occurred one day after the next in August 1969. 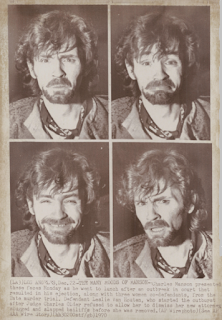