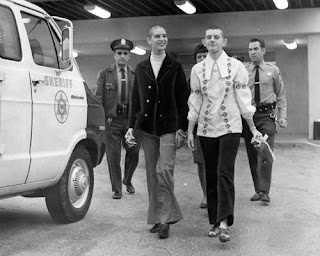 For all you Leslie Van Houten fans out there, I have found a one-of-a-kind item on the weird, morbid website murderauction.com.

What I am talking about is a hand-written journal written by Leslie Van Houten when she was in Sybil Brand jail awaiting trial for the LaBianca murders. Here are a few excerpts:

First, there was the carny, Bobby (Beausoleil), wearing a tight striped T-shirt with no sleeves and tight, worn jeans withheavy boots. His face was that of a pretty-boy, yet there was ruggedness. His arms were firm and muscular. He captured my heart at once. The next was a young gypsy woman who carried herself proud and showed in her face that life was an exciting, unplanned game. Her hair was jet-black, long, wavy and wild. It hung about her neck and shoulders as if to say,"Come touch me". Her clothing was a loose muslin tapestry, pants with large tulips and leaves flowing in patterns. They hung loose around her hips and underneath was a tight black leotard which showed off her thin waist and firm, round bosom. Around her head she wore a shawl that matched her pants and put an air of innocence upon her. To me, she seemed so perfect. I wanted to be friendly, but my own negative thoughts of myself prevented too much friendship. Later, as I began to see I also was beautiful, as everyone is, we became closer than close. The third one had frizzy blonde hair that reached to the middle of her back. Her face had a devilish grin on it, almost searching for some mischief. Freckles popped out on her nose and gave her the look of a little girl who was always into something. She wore a short red dress gathered at the top. It was patterned in small white roses and had long sleeves. A tiny tear was in the dress that one suspected was there from her tomboying around. She wore button-up boots that put her in the time of the twenties. Her body was long and lean with tiny little breasts. These two appeared complete opposites yet were the best of friends. To see these people, I first was quite jealous. After all, they were so free and here I was completely miserable. My first idea was to escape from them and that's just what I thought I did. I hurried into my car and drove all the way to Big Sur. My heart was sick, I wanted so much to be free and pretty like they were. I didn't even enjoy Big Sur. I found out you can't escape yourself. On the way home, I kept hoping they had gone. However, I returned, and they were still there. It was almost as though fate had planned it.

Our magic carpet was a white pick-up with the insignia," Randy Starr and His Stuntmen", with a horse's head on the side. That's just what we were, a wonderful stunt show, bringing fun wherever we ventured. Gypsy and I rode in the back with the cargo. She didn't seem to mind that Bobby wasn't giving her heaps of attention and was moving in on new territory. She would look into my eyes, I would look into hers. Our hands would meet and give gentle little squeezes as if already knowing we were to become each other and experience much together.

My first sight of the family was at night, up in the creek a ways at the Spahn Ranch. Everyone was living in a tent and a green school bus that had been pulled up off the road. Every member looked so colorful, they all were smiling at me, and when I approached the fire, made room for me to sit. It was a strange feeling to see them all sharing their food and listening to each other tell secrets about themselves most people would have been ashamed to ever reveal ... the hang-ups they had, things they'd done, and incidents that used to upset them. As one would tell of a situation, others would listen, then giggle, because each of us had the same ones. It seemed that by doing this, the Family became so much closer. Instead of hiding from one another, we were learning to "show off" for one another. Charlie came to the campfire with a guitar. Everyone sang some beautiful songs. The words seemed to leave a peaceful satisfaction and your mind would be at rest. All the voices sounded in pleasant harmony together, each person choosing his own part to add to the basic tune. As a result of this, the tune became a flowing cycle of continuous free thought. When the music ended, Charlie, Bobby and myself left the others and went to the pick-up. My heart yearned to stay with the Family but Bobby wished to leave … Charlie gave me and Bobby a warm hug before we left. His touch was gentle. The love put forth in that hug I can still recall.

We asked where the others were and he replied, "In a bus that broke down in some prune field." Off we went searching again and, at last, after cruising many prune fields, we found the bus. When I passed through the front door of the bus I entered an Arabian tent with one long bed covered with satin sheets and tapestries hanging from the roof. Bobby and Paul left with some money and when they came back, they had boxes and boxes of zoo-zoos. All the girls were dressed so special, in patchwork dresses, shorts that showed off their pretty tanned legs, crazy hats and loose satin pants. Everyone was glad to see me again and I was really happy to see them. Everyone looked so familiar, as though Ihad always been with them and always would be. I decided I was going to stay and return to the ranch with the others and whatever Bobby did was his business. Naturally, I was really hoping He'd come but the next day, Bobby left. I was a little nervous, for now, I was left alone with the Family and I knew I had changes to go through. The girls did everything together ... We would cook together, sew together, sing together and play together. While we would do these things, we would become different people. Perhaps, one day we were short-order cooks in a small cafe or we were maidens cleaning the Royal Palace. Our only limitation was our imagination.

The whole effect of the living room was that of an Arabian tent. The sitar, tabura and tablas also added to the setting. Outside this "tent" was a completely different world. There were two bedrooms, one was set down further than the rest of the house, it was nothing but one big mattress. We would jump into the room and roll around and do tumbling. This is where most of us slept ... I say most of us because generally there would be someone who didn't want to sleep with everybody, mainly due to the fact that they were new to the Family. Actually it's lots of fun to sleep with lots of people and make love in large numbers, too. For these new people, the other bedroom was made into a "shy room". It had one bed and a large window that you could see the mountains and creek from. There is a group of trees outside the window that I used to sit and marvel at ... so beautiful, real and proud. Pastel curtains and lots of lace were around the window. The main function of this room was to hold our clothes. We seemed to have gathered clothes from every era in every size. There were patchwork farm dresses, Prince's shirts and satin pants, full length gowns, court jester's shirts, meditation robes, baggy jeans, T-shirts, cowboy shirts, "straight" clothes for the "straight world", hats, tights, scarves and oodles of other goodies. You could go into that room and trip for a long time on who or what you wanted to be that day.

After a week or two, the bus returned to the ranch in running order. The inside had been tattered and torn, so it was time to fix it over. We built a platform about two feet high under which we could put supplies. Then we placed about four King-sized mattresses on the platform. We laid a beautiful Ivory-cream colored carpet with big pink roses worked into the corners on the front floor. A gold tapestry was draped on the roof and a black tapestry with red roses on the sides. The bed area had red satin curtains that opened and closed as a divider when it was necessary, and the back door was covered with a light blue-green silk that had black fringe dangling over it. The bed was made with black and purple satin sheets and covered with a patchwork guilt we had been sewing on by hand. Everything we ever do is done by hand and with all the love we've got. The fingers on our hands are nimble enough to create the most delicate works of the imagination. Wiggle your fingers and relax the stiffness, then watch them perform beautiful dances before your eyes.

The freer you let yourself become, and do what you want, your mere existence becomes a crazy, fun game in which nothing matters. When there are no plans, everything runs perfectly and you find yourself in the craziest situations... on a mountain, with ten people holding a jeep from falling over a cliff ... making a rock road in the middle of the vast desert starting nowhere, stopping nowhere ... eating a banana split big enough for twenty people ... living in a house that looks like an Arabian tent ... driving a three wheeled Harley through the middle of town in the pouring rain ... sleeping in an underground shelter ... having an orgy with lots of naked bodies loaded on acid ... being a midwife to a beautiful new life ... welding dune buggies that are mobile beds ... being a go-go dancer, a biker and a ranch cook all at once ...

and, believe me, those are just a few.