Growing up in the 60's & 70's and always having been drawn to the macabre, I saw coverage of many many murder trials on the nightly news. This was long before CNN spawned the 24-hour news cycle that we have today. Back in my childhood through early adulthood, cameras were not allowed in courtrooms. According to uscourts.gov:

In 1972 the Judicial Conference of the United States adopted a prohibition against "broadcasting, televising, recording, or taking photographs in the courtroom and areas immediately adjacent thereto." The prohibition, which was contained in the Code of Conduct for United States Judges, applied to criminal and civil cases.

Instead, what we saw on the nightly news was the work of talented artists hired by both newspapers and broadcast outlets to capture the personal dynamics of legal trials, which for many decades were off-limits to photographers and television cameras. The artwork brought the theater of the courtroom to life, capturing gestures, appearances and relationships in a way that humanized the defendants and plaintiffs, lawyers, judges and witnesses.

This all began to change in October 1988 when Chief Justice Rehnquist appointed the Ad Hoc Committee on Cameras in the Courtroom, which ultimately led to the presence of courtroom cameras. To this day, the question of cameras in the courtroom are up to the discretion of the presiding judge, which is why we still occasionally see the work of these sketch artists on news broadcasts.

The Tate-Labianca trial was brought to the public under the old system. The only glimpses of the defendants were of them being let to and from the courtroom.

The Library of Congress website contains some of the sketches made during the trial. Here they are with links provided: 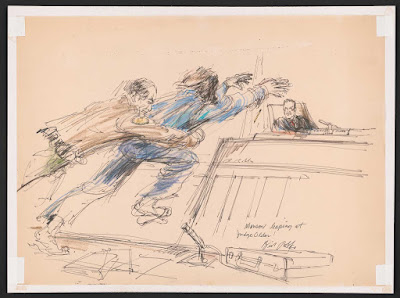 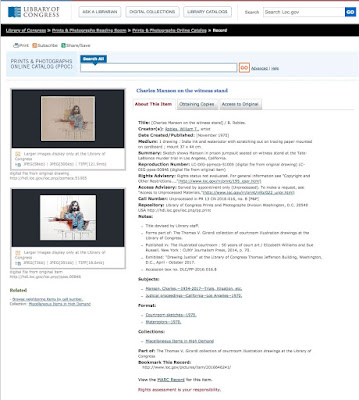