Did you know that there was a lawsuit filed by Shorty's first wife, Phyllis Shea, on behalf of herself and daughter Karen?

There was a small article published in various California newspapers in March of 1971 before the trial charging Manson, Davis and Grogan with Shorty's murder had been scheduled.  As it was explained to me by David, our resident attorney, a wrongful death suit needs to be filed within one year of the death.  In this case Shorty was considered missing until a grand jury in December 1970 issued an indictment against Manson, Davis and Grogan for the murder of Shorty.  So, the clock starts at the indictment. 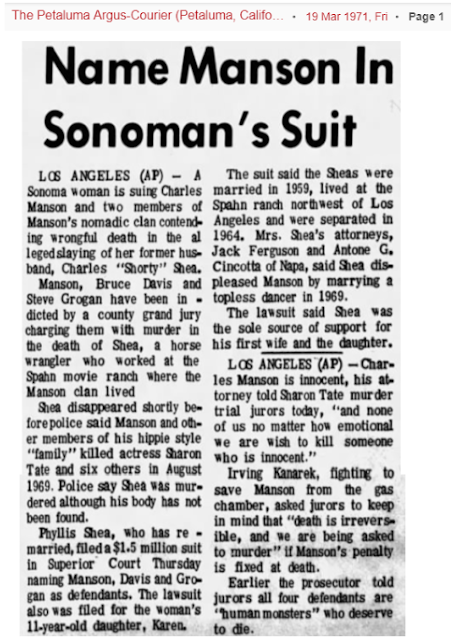 Also, included were Steve Grogan's parents, named as John Doe Grogan and Mary Doe Grogan in the lawsuit, because Steve was a minor at the time of Shorty's disappearance/death.  Steve turned 18 years old on July 13th 1969 and was considered a minor at that time because he was under the age of 21.  Many articles about the Manson Family say that Leslie Van Houten was the youngest member of the Family to have been convicted of murder but actually Steve was the youngest.

Phyllis Shea's lawsuit claimed that Shorty had been the sole support for her and their daughter.  In fact, Phyllis and Shorty separated five months after their marriage May 15, 1959.  Their daughter was born November 10, 1959, a month after the separation.  There is no record of a divorce for Phyllis and Shorty.  There is also no evidence that Shorty ever paid Phyllis any alimony or child support although Shorty may have given Phyllis money from time to time but considering Shorty's record of earning and borrowing money even that is doubtful.


Phyllis did hook-up with a man not long after she and Shorty split up and had four children with that man before Shorty was killed.  I think it's safe to say that Phyllis did not depend on Shorty for an income.  But, no one can fault her for trying to get a little something for the daughter she had with Shorty.

The lawsuit went on for years but eventually petered out due to unknown reasons. 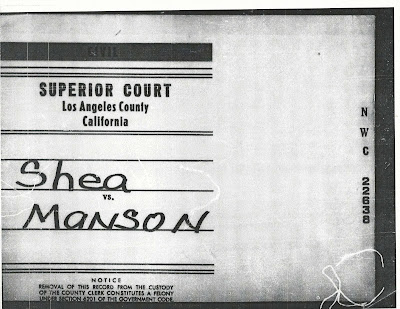