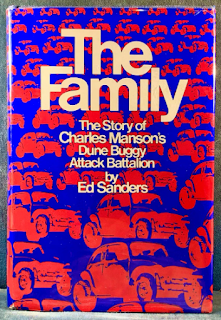 Sometimes it takes a while to locate where a particular story got its beginnings. Ed Sanders, The Family, is one of the early books in the Manson Saga and he has quite a few stories in the book that make you wonder if they are true or not.

A number of years ago I wrote a post about Filippo Tenerelli who had been pegged as being a Gypsy Joker. Apparently, Sanders leapt to that conclusion because the Gypsy Jokers had a member named Dago. Dago being a slur for an Italian person. Since Tenerelli was Italian surely, he must have been the person who the Gypsy Jokers nicknamed Dago.

The post puts to rest that the Gypsy Joker named Dago was not Filippo Tenerelli. Phil Cross was the president of the San Jose chapter of the Gypsy Jokers. In 2013 Cross wrote "Phil Cross: Gypsy Joker to a Hells Angel". I contacted Phil through his publisher to ask about Dago and he replied with one of the more memorable emails I’ve received.

I’m glad you enjoyed the book.

In answer to your question, Dago’s name was Donald Ragante, and there was no Gypsy Joker named Filippo Tenerelli.

One other thing you might post is that Ed Sanders statement that the Gypsy Jokers were “heavily into the occult” is complete bullshit. We could have cared less about any of that shit. We rode, partied and fought, and that’s what we lived for.

So, where did Sanders get information that the Gypsy Jokers were into the occult, possibly tied to The Process? I have the answer and it came from an unexpected source.

Most of the recent documents I have been posting are from the Inyo County investigation and arrests of Charles Manson and other members of the Family. In with all of the documents I received there were some pages of information on The Process and a police interview with a woman who was the girlfriend of Victor Wild. Wild, as you might recall, had a leathercrafting shop in San Jose CA. He is said to have made the leathers that Manson was wearing when he was arrested at Barker Ranch. Wild, also known as Brother Eli, had been a member of The Process but dropped out to apparently start his own cult.

The address and name of the leather shop.

The unexpected part of the story is that the girlfriend’s interview with the police was conducted during the investigation of the Doreen Gaul and James Sharp murders.

Victor Wild’s girlfriend was Leslie Bouffard, she contacted law enforcement after the Gaul/Sharp murders because she wanted to give a statement. She is mentioned on pages 18 and 19 of the Gaul/Sharp police report which is linked in the post about their murders. The date, November 15, 1969, on page 18 is the same date that is on the following interview.

Sanders, in the first edition of The Family pages 114-116, relates some of this interview, particularly the information on page three of the interview which involves the Gypsy Jokers.

Pages one and two of the interview give some standard information about the Process and mentions that Moore was once a member of Scientology. Bouffard states on page two that The Process tried to take over the Jokers.

Note: at the top on page one someone has written the word NO and over and underlined it. I did not do that; it was on the page when I received it. It does lead me to think that Bouffard’s statement may not have been taken seriously or considered not relevant to the Gaul/Sharp case by law enforcement though. 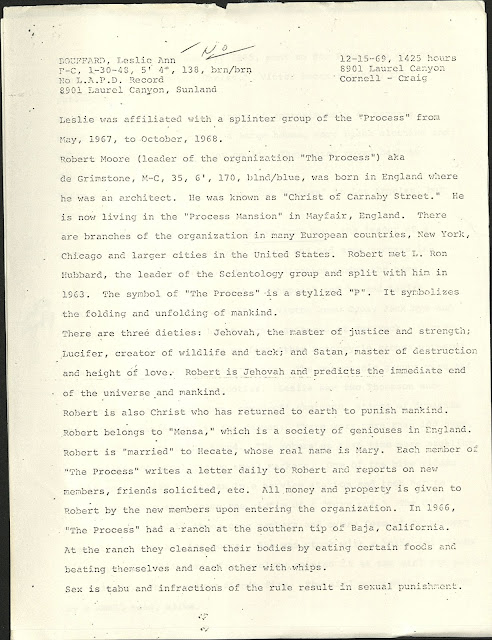 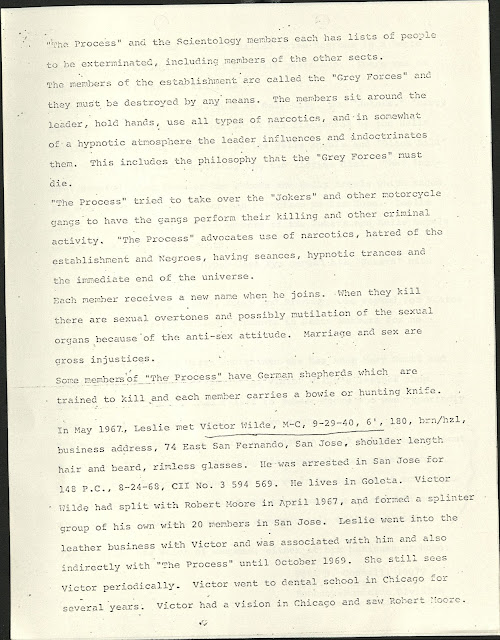 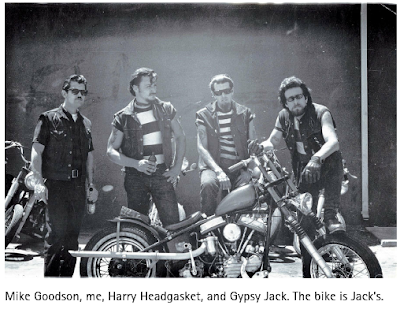 The Labor Day 1968 run to Mendocino County is the only part of the interview where Bouffard gives a firsthand account of what took place among the Gypsy Jokers. The rest of her statements would be considered secondhand knowledge or hearsay in a court of law.

The account of the Mendocino run has a few problems. A newspaper article written just before the Labor Day weekend warns of influx of several motorcycle gangs for the weekend. 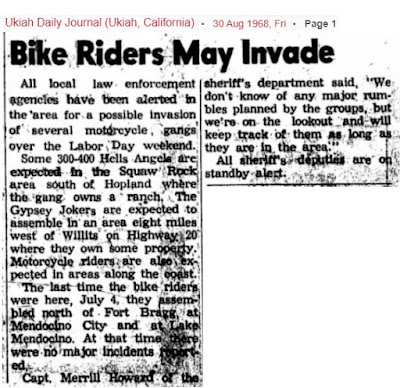 The Hells Angels were to meet near Squaw Rock in southern Mendocino County. Squaw Rock has been renamed to Frog Woman Rock in the last couple of years due to wokeness, “squaw” being derogatory to Native Americans. Leslie’s account has them meeting at Red Rock. There is an area in Mendocino County named Red Rock but it’s very remote with no paved roads and in the far northeast section of the county.

Leslie goes on to say that the Gypsy Jokers along with other clubs were meeting in another canyon. The way it is stated in the interview it sounds like the Hells Angels and other clubs were not a great distance from each other but the Gypsy Jokers were going to party on some land one of the members owned about eight miles west of Willits. Willits is a good 50 miles north of Squaw Rock. She continues, saying there were many guns being fired as well as explosives. She also tells of a girl having been “turned out” by some of the riders. The girl was raped by multiple men, threatened with a gun and stabbed. The girl did get away alive.

If all of that happened Mendocino County law enforcement missed it because an article written after the weekend said there was no trouble caused by the cyclists. There was no mention of a rape and stabbing or of gunfire and explosives. 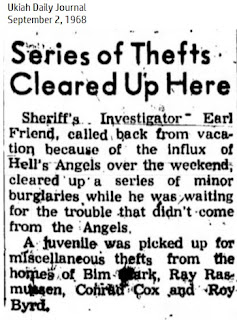 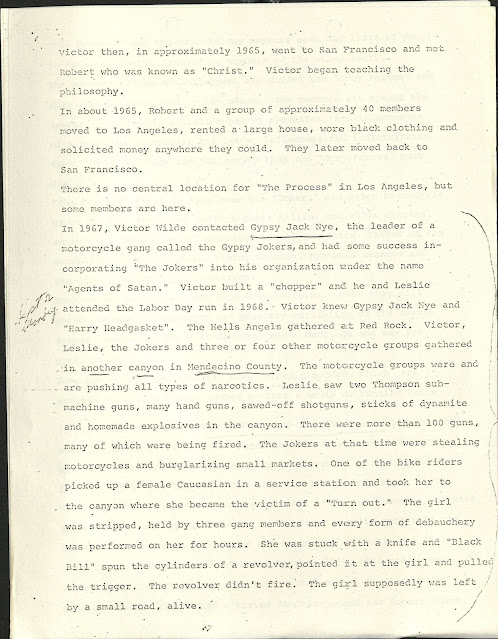 Page four of the interview goes on to give more details about the Gypsy Jokers. Three Gypsy Joker’s were arrested for killing a Black man and injuring another for no apparent reason in February 1969. There were not three Black men killed. 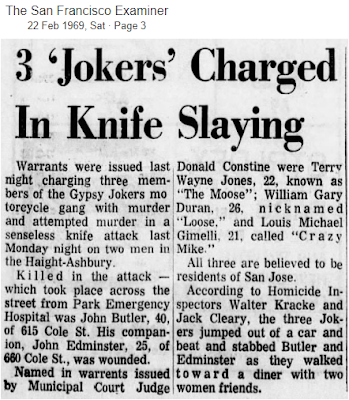 Next on page four Leslie talks about a Gypsy Joker, Dirty Doug, and a Hells Angel being killed in a bar fight which started a war between the Jokers and Angels. There may have been a bar fight but no one was killed. Dirty Doug, T/N Doug Bontempi passed away in 2009. However, there was a war between the Jokers and Angels. It went on for a number of months though I could not find any deaths of either Jokers or Angels that were related to the war. Lots of fights though, many of which are recounted in Phil Cross’s book. The majority of Gypsy Jokers who died were killed in vehicle accidents or by law enforcement. The San Jose chapter of the Gypsy Jokers patched over to the Hells Angels June 11, 1969. The Jokers knew they could never beat the Angels so decided to join them instead.

I can’t speak to several students being stabbed in Santa Barbara. I could not find any articles saying there had been a rash of stabbings.

Leslie claims to have seen Grant Molan (Steve Grogan), and possibly Mary Scott (Patricia Krenwinkel) and Sadie Glutz in the leather shop. She does not say when she saw them. Because Leslie used the aliases of Grogan and Krenwinkel I suspect she was shown mug shots taken before law enforcement had a handle on the true names of the Family members.

As for the claim that the motorcycle clubs were discussing potential contract murders that went to the lowest bidder, I can only say that I looked through newspaper articles for murders for hire arrests. I found a handful that took place between 1966 and 1969. No motorcycle club members were named as suspects. Either they were very, very good at not getting caught or it just didn’t happen. I suspect the latter. 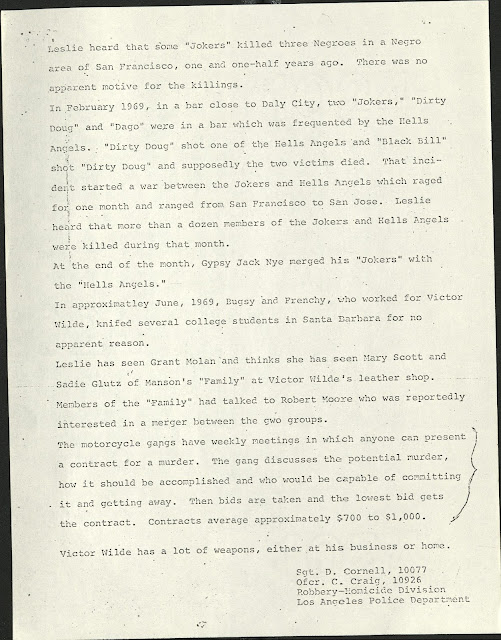 Sanders didn’t write about most of what was in Bouffard’s interview, that was probably a wise decision on his part. But what he did write obviously came from the interview and created a shit storm of controversary.

I attempted to contact Victor Wild. I told him I had Leslie Bouffard’s police interview and would like to ask him some questions. He did not reply to my email.