One of the biggest recent stories in California has been about the wildfires that were greatly fueled by the fact that the state has experienced four straight years of drought. But, weatherpersons assure us, help in on the way in the form of an El Nino weather effect that will be the greatest since the winter of 1997-98. That would be good news, because the winter of 1997-98 was the second warmest and seventh wettest since 1895. Rainfall totals were the greatest in over a century and 53 California counties were declared to be disaster areas as the torrential rains inflicted over $550 million in damages on the state. There were also 17 storm related deaths, one of which is of particular interest to readers of the MF Blog: the death of Frank Retz, which occurred when his vehicle was engulfed by a bridge collapse at the site of the old Spahn Movie Ranch.

Frank Retz appears in the TLB literature as an agent for the Transcontinental Development Corporation (TDC), an outfit that wanted to buy the properties around Spahn's Ranch (and the ranch itself) in order to build a resort complex for German Americans. Since some people who wanted to develop this complex saw the presence of Charles Manson and his associates at Spahn's Ranch as an impediment towards acquisition of the ranch, efforts were made to have them removed from the property. One of these efforts involved calling the police in to harass the Manson people as often as possible, something that surely stirred up bad feelings. According to Danny DeCarlo, Spahn Ranch ranch hand Shorty Shea was hired by the corporation to keep an eye one the goings on at the back ranch house on the Spahn property. Shea did so, not only creating a lot of tension but also setting himself up to be murdered. Frank Retz started out as an agent for the corporation,and eventually acquired property adjacent to Spahn's Ranch where he established a residence for himself accessible over a bridge built over the creek running in the area behind and down the hill from the movie set structures.

Retz had more than a passing involvement with the intrigues at Spahn's Ranch. He was familiar with the cast of characters, and they were familiar with him. According to Ed Sanders, Retz once gave a ride to Kittly Lutesinger when she was trying to flee the ranch. Retz was also involved with the encroachment of the German developers. He was the person who hired Shorty Shea in a security capacity to assist in efforts to have Manson and his associates thrown off the ranch. Retz's participation in these activities (he even personally set up the arrest of Manson and Stephanie Schram in one of the outlaw shacks on August 24, 1969) earned him such animus from "the Family" that Manson Prosecutor Stephen Kay later said that Retz was next (after Shea) on the list of those to be murdered in the summer of 1969. 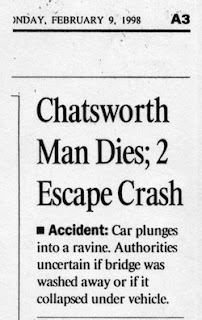 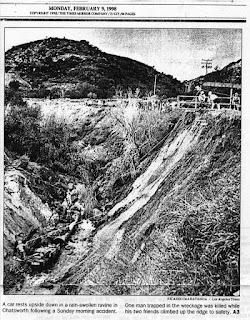 Accident: Car plunges into a ravine. Authorities uncertain if bridge was washed away or if it collapsed under vehicle.

CHATSWORTH — A World War II German Army captain who emigrated to America after the war and found success as a businessman became a victim early Sunday of the recent series of powerful storms that slammed the Southland. Frank Retz, 84, was killed when the car he was in fell to the bottom of a 60-foot ravine near his secluded home.

Authorities were still investigating Sunday night whether rain waters washed away an earthen bridge that led to Retz's home off Santa Susana Pass Road, or if the weight of the car in which he and his friends were riding caused the bridge to collapse.

The car, which belonged to Andy and Helen Gattuso, plunged to the bottom of the ravine about 1:30 a.m., authorities said. The Gattusos, both in their 60s, managed to crawl out of the overturned vehicle and climb up the edge of the embankment.

But when the couple reached Retz's home, the power was out and the telephone was dead, said Capt. Michael McMaster of the Los Angeles Fire Department.

Authorities were called six hours later when someone on their way to Sunday morning services at the nearby Church at Rocky Peak saw the couple waving their arms for help.

"I looked over and saw them standing there, and they definitely looked like they needed help," said Dan Oran, an usher at the church, who arrived minutes after the parishioner who called 911.

The Gattusos were taken to Granada Hills Community Hospital, where they were treated for minor injuries and released. They were recovering Sunday afternoon in their Northridge home and did not wish to speak with reporters.

Coroner's investigator Erik D. Arbuthnot said it was not immediately clear what caused Retz's death. Despite the fall, there was little obvious trauma to his body, he said.

McMaster said there was a 3-foot-wide culvert that channeled water from a stream underneath the earthen bridge that led to Retz's home.

Tina Thompson, a neighbor, said the bridge had been "red tagged" as unsafe by city building inspectors because Retz installed the drain himself, then covered it with fill without the proper permits.

"He used to tell me he wasn't going to let the city bureaucracy tell him what he was going to do on his property," she said.

Retz was remembered as a colorful character by his neighbors, who said he boasted of being the stuntman atop the horse in the TV series, "Zorro," and of once physically assaulting Charles Manson, whom he caught trespassing on his property.

By others, he was recalled alternatively as an affable partyer [sic] and an ill-tempered recluse. Retz apparently spent his last night alive just as he would have liked, said his attorney, John J. Altenburg.

The Gattusos had taken Retz to a dance at the Bavarian Haus club in North Hollywood, Altenburg said, where he often enjoyed spending time with fellow German expatriates.

"He was an 84-year-old man full of vim and vigor," Altenburg said. "He loved to dance and sing. He would sing, totally offbeat, but at the top of his lungs."

Retz was decorated during the war by the German army, Altenburg said. After the war he came to the U.S., where he was in several businesses, including import-export, retail food and discount airline charters.

Retz also had a passion for soccer and horses, and made many friends in the movie business over the years, said Bill Murdock, who knew Retz for 20 years. Retz sometimes rented his ranch--a 64-acre spread in picturesque hills overlooking the San Fernando Valley--to filmmakers.

Nikki Wright, who grew up near Retz's ranch and still lives nearby, said the man had charm.

"We care a lot about him," she said, as she watched firefighters pull Retz's body from the car.

Altenburg conceded that Retz was protective of his property, as indicated by several lawsuits stemming from dog bites, he said.

Thompson, who is Wright's mother, said that Retz told her several times about his role in the "Zorro" series. "Whenever you see Zorro on a horse, it's me," Thompson quoted Retz as saying.

He also told her of the time he attacked Charles Manson, ordering Manson and his followers to get off his land.

Retz's son, Phil, an architect in the Seattle area, didn't want to talk about his father's colorful past. 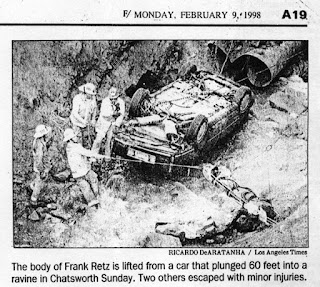 One interesting thing about this article is that although there is mention of Charles Manson and his associates being on Retz's land there is no indication that the land was adjacent to Spahn's Movie Ranch. Indeed, there is no mention in the article about Spahn's Ranch at all. Readers would not even know that Retz's death basically occurred at the site of the ranch.

I had a brief encounter with Frank Retz in 1989. At the time I was in Los Angeles for the August 9, 1989 premiere of the Nikolas Schreck film Charles Manson Superstar. On that afternoon of the twentieth anniversary of the Tate-LaBianca murders I, along with several of the people involved in the production of Superstar (and the publication of the book The Manson File) went to the site of Spahn's Ranch and were met there by a Lederhosen and cowboy hat-clad Retz. I stayed pretty much in the background; most of Retz's conversation was with Nikolas Schreck and Nick Bougas. Retz still talked about turning the area into some sort of resort for Germans. He also claimed that he and his soccer team had "kicked Charlie Manson's ass," a contention that was met with smiles and rolled eyes all around. (Three years before our encounter Retz told an interviewer, "I told those druggie Manson people to get out, and when they saw me they would run away because I told them I would beat them up to death.'') 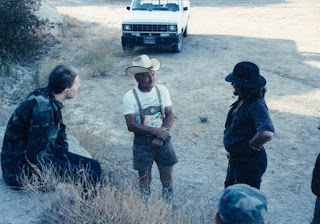 Nikolas Schreck, Frank Retz, and Nick Bougas at the site of Spahn's Movie Ranch in 1989 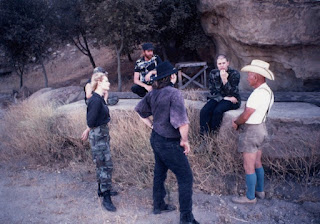 After Retz's death his secluded residence was ransacked by souvenir hunters. Some of the items so looted eventually found their way to me. 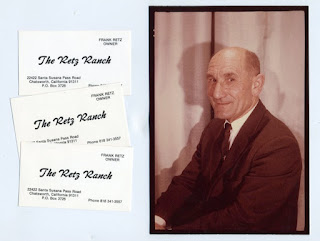 The collapsed bridge was replaced by one that was built to code. The new bridge is the one that's there today. 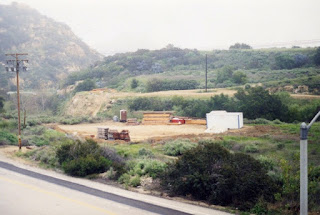 Franks Retz's dream of turning the Spahn Ranch area into a resort aimed at German Americans never came to fruition. Today the area to the south and west of the ranch site is privately owned and maintained and is sometimes rented out for private functions such as weddings. The actual site of Spahn's Ranch itself is a part of the Santa Susana Pass State Historic Park. It will never be developed into anything other than what it naturally becomes.