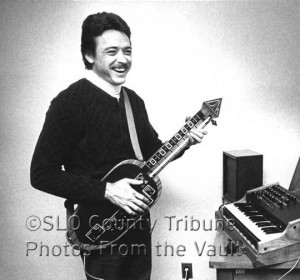 Bobby Beausoleil plays his invention, the syntar. The synthisizer/guitar was made while he was in CMC prison. He was convicted of the murder of Gary Hinman and was an associate of Charles Manson. ©2010 Doug Parker/Telegram-Tribune published 12-13-1984

On Dec. 13, 1984, a story was published of a cheerful looking Beausoleil playing a synthesizer/guitar invention he called the syntar. His circuit designs were featured in a nationally published electronic music magazine, "Polyphony."

"I would give anything to someday be known as something other than a murderer, " he said in the Dec. 13, 1984, story.

A year later, allegations of child pornography surfaced after CMC officials discovered drawings and stories Beausoleil had written about spanking and had planned to mail to his wife Barbara. She then lived in Arroyo Grande and published newsletters "Sassy Bottoms" and "Domestic Discipline Digest" according to a Dec. 3, 1986, story. A postal inspector later said the material was not categorized as child pornography.

Prison reports from the 1980s described the convict as intelligent and having a good prison record, but the specter of Charles Manson is in the room at every parole hearing. In a Dec. 10, 1987, story, he said, "I feel like every time I come to one of these hearings, I have Mr. Manson sitting next to me," he said.

"I despise what the man represents … If I had known about what the man was about then, I wouldn’t have associated with him."


Info above was obtained here.