Last Post on The Brotherhood Before Patty Shuts Up 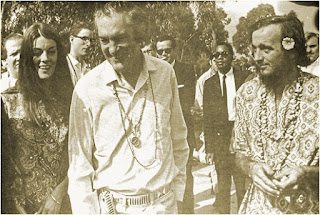 at left: Leary with John Griggs


Amphetamines, bikers and greed set the sixties apart from the seventies in the California drug subculture. With John Griggs, Voytek, Rosemary and possibly others all out of the way within a matter of days, a shady character named John Gale was able to take over the operation and things were never the same. Not that Griggs was a saint: in his early days, he was a gang thug with a record, as were all but one of his closest associates. Their "American Graffiti" era car club was the precursor to the Outlaw Motorcycle Clubs that came later. LSD and the comfort of Griggs' teepee, however, may have caused him to go soft and not fully realize what he had built and what it might be worth to less scrupulous parties. 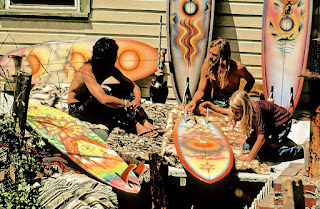 At right in the center is John Gale, Griggs' unofficial successor as head of the BEL

"What," a friend of the blog asked us recently, "would cause all of Hollywood to look away and say 'I never knew Manson' when in fact, we know they did?" Because everyone's hands were dirty with money, drugs, and innocent blood, and everyone was afraid that they might be next!

"The Truth" is likely that Charlie was just a cog in a much larger wheel: a disposable small time criminal who nobody'd believe or take seriously. Charlie was the perfect scapegoat and antithesis to "the beautiful people" who held all the cards and still do to this day. For all his faults, Charlie was not a greedy person. He and others of his time resented the rich "piggies" for overextending their business interests solely because they could. It's a case of the have nots resenting the haves, just as it's been all throughout human history, a fact of life. 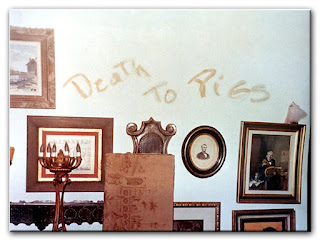 This does not, of course, make Charlie any less culpable for what happened. We know for a fact who did the actual killing, and upon whose orders. Whether The Family was acting alone or on the orders of someone higher up, the theory that they were somehow involved with "the syndicate" (as Schreck calls it in his latest book) sure makes a hell of a lot more sense than that "Helter Skelter" BS, don't you think? But, Charlie don't surf, and he don't snitch, either. So, there he sits.

In March of 1972 over 200 law enforcement officials met in San Francisco to share what they had learned about the BEL. Supposedly there were over 750 names on a list they'd compiled of Brotherhood of Eternal Love associates, many of whom were arrested later that same year. Would we the Manson bloggers recognize any of the names on that list? This may be key. And another key, like Jiri said on a previous thread, may be who ended up benefiting financially after the shakedown of '69?

Let's get on it, people!