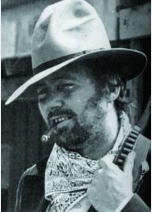 First part of the story is here:
http://www.eviliz.com/2013/03/an-interview-with-randy-starrs-wife.html

Windy and Shorty had been friends for years.  The people who were regulars at the ranch were like family and counted on each other.  Some, like Shorty came to work at the ranch between other jobs.  Windy remembers Shorty being 6' 4" and about 210 pounds, he had a dark brown beard and wild blue eyes.  She said, he claimed he was called Shorty because of a morning that he had to "goose his self and rope his tool to take a morning leak"!  They worked hard on the ranch and they played hard, too.

Shorty came from a working family and grew up in Medford Massachusetts .  His father John was a truck driver for a food distribution company.  Shorty's mother was French Canadian.  In 1940 there were five boys with Shorty being the middle son, he had two older brothers and two younger brothers.

And now we'll pick up where we left off last week.

Word had gotten up to Spahn that Windy had been beat up and Shorty, out of concern for Windy, went over to her house to check up on her.  He took one look at her and became enraged.  Windy explained to Shorty about the police stop, that her truck was seen at one robbery felt to be connected to other robberies, then how Manson had come over and demanded the keys to her truck and when she wouldn't comply proceeded to beat her up.  She said that Manson was a dirty fighter, too, kicking her while she lay on the floor.  Shorty turned on his heels and immediately headed towards Bill Vance's house screaming as he got close, "Come out of there, you yellow bastard."  Little Harvey was the first one out of the house and tried to calm Shorty down, he was swatted away by Shorty for his troubles.  Next Bill Vance came to the doorway and out of the house, Shorty coldcocked him, no questions asked, leaving him lie in the yard.  Bill and Shorty had once been friends having worked together at Spahn before Bill thought he would give up being a cowboy to become a truck driver.  The friendship ended that day.

By this time Manson had armed himself with a knife and also came out of the house.  He was talking tough but this time Manson's slick verbal patter did not do him any good.  Shorty proceeded  to beat him to a pulp from the front of the house all the way out to the middle of the street where he left him on the center line unspeaking and not moving.

Windy firmly believes that the beating Manson took that day from Shorty is the reason why he was killed. She also believes that is why so many of the guys attacked him en masse.  Manson was thoroughly humiliated that day.