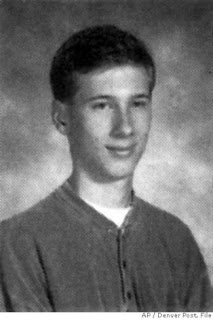 There is no direct evidence that Eric Harris read Helter Skelter by Vincent Bugliosi, the book about Charles Manson that Dylan used as the primary source for his research paper. However, given Eric's fascination with violence and the fact that his best friend read the book, it would not be surprising if Eric read Helter Skelter. In addition, the number of parallels between Eric's writings and statements found within Helter Skelter suggests that Eric not only read the book, but also deliberately patterned himself after Manson.

Manson was said to have two enemies: the police, and African Americans.3 Eric identified the police as the "person" he hated the most.4 Elsewhere, in a list of people he hated, he wrote "cops! Stupid law enforcing people!!!"5 He also spouted racist comments and jokes,6 and wrote about sending blacks back to Africa.7 His racism is of particular interest because as a younger boy his best friends included one who was black and one who was Asian.8 In fact, a friend of his at Columbine who was part Mexican commented that Eric was not racist toward him at all,9 and an African American classmate said Eric showed no signs of racism toward her.10 It thus appears that Eric's racism was not deeply rooted, but adopted as an attitude during adolescence.

One of Manson's followers said Manson "wanted to do a crime that would shock the world, that the world would have to stand up and take notice."11 Eric wrote, "I want to leave a lasting impression on the world."12 Helter Skelter, the race war that Manson believed he would start, was supposed to "be all the wars that have ever been fought built on top of the other."13 Eric wrote that his attack would be like "the LA riots, the Oklahoma bombing, WWII, Vietnam, Duke and Doom all mixed together"14 (Duke and Doom are video games). Manson "was convinced he could personally start that war himself."15 He told his followers, "I'm going to have to start the revolution."16 Similarly, Eric thought he could start a revolution: "Maybe we will even start a little rebellion or revolution."17 Elsewhere he said, "We need to fucking kick-start the revolution here! … If we have a fucking religious war – or oil – or anything. We need to get a chain reaction going here."18

The war that Manson envisioned was to result in global destruction: "Charlie was going to bring on the ruination of the world, and this is why all the murders were committed."19 Manson himself said, "I'm going to kill as many of you as I can. I'm going to pile you up to the sky. I figure about fifty million of you."20

Like Manson, Eric thought in terms of global destruction. One passage in his journal says, "If you recall your history the Nazis came up with a "final solution" to the Jewish problem. Kill them all. Well, in case you haven't figured it out yet, I say ‘KILL MANKIND' no one should survive."21 He also wrote: If I can wipe a few cities off the map, and even the fuckhead holding the map, then great. Hmm, just thinking if I want all humans dead or maybe just the quote-unquote "civilized, developed, and known-of " places on Earth, maybe leave little tribes of natives in the rain forest or something. Hmm, I'll think about that.22

Manson and his followers rejected the idea that words had real meanings. They also rejected basic concepts of right and wrong, guilt, crime, and sin. If the concepts have no meaning, then people are free to do whatever they want and feel no remorse. This rejection of values and meaning appears repeatedly in Helter Skelter as well as Eric's writings. For example, a Manson family member said, "Sorry is only a five-letter word."23 Eric wrote, "Sorry is just a word."24 Other quotes from Helter Skelter demonstrate a rejection of morality:
Manson made many comments that indicate he thought of himself (literally or figuratively) as Jesus. He identified himself as "Charles Manson, also known as Jesus Christ, Prisoner."33 A follower of his said, "Charlie claimed that he had lived before, nearly two thousand years ago, and that he had once died on the cross."34 Manson referred to the court case against him as "this trile [sic] of Man's son."35

Though Eric rejected Jesus, he frequently referred to himself as God or god-like. He wrote "Ich bin Gott," which is German for "I am God" in his own planner and in the yearbooks of at least four classmates.36 He also wrote, "I feel like God and I wish I was."37 Both Manson and Eric viewed themselves as the ones who established laws. Manson said, "I make laws. I'm the lawmaker."38 Eric wrote, "My belief is that if I say something, it goes. I am the law."39 When he was arrested in 1967, Manson listed his occupation as "minister."40 According to a friend, Eric was known as "preacher."41 Eric himself identified one of his nicknames as "reverend."42

Eric and Dylan, in fact, had several nicknames. The most puzzling ones are names of colors. Eric was "Indigo" and Dylan was "Green."43 Why? What meaning was there in colors? Manson created the Order of the Rainbow and gave his closest disciples color nicknames.44 For example, Squeaky Fromme was known as "Red" and Sandra Good was known as "Blue."45 Perhaps Eric and Dylan imitated this practice.

Both Manson and Eric admired Hitler. Manson thought "Hitler had the best answer to everything."46 In addition, Manson "said that Hitler was a tuned-in guy who had leveled the karma of the Jews."47 Eric made clear his admiration for Hitler when he wrote, "I love the Nazis."48

Manson preached that murder was not as bad as killing animals or plants. He valued nature over humanity: "To Manson it was not wrong to kill a human being, but it was wrong to kill an animal or plant."49 Manson said, "I'd rather kill people than animals."50 When Manson spoke of killing millions of people, he commented, "I might be able to save my trees and my air and my water and my wildlife."51 Eric seemed to echo Manson's ideas. He wrote about eliminating humanity but preserving nature: "the human race isn't worth fighting for, only worth killing. Give the Earth back to the animals, they deserve it infinitely more than we do."52 He also commented, "I think we are all a waste of natural resources and should be killed off."53

Thus, despite any statements from Eric that he was interested in Manson, there are many reasons to think that Manson was a significant influence on Eric.