The Ukiah murders after one year 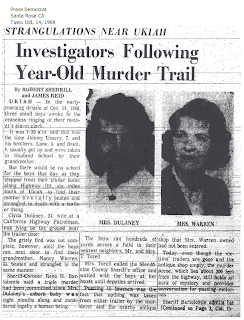 UKIAH - In the early morning drizzle of Oct 14, 1968 three small boys awake to the ceaseless ringing of their mother's alarm clock.

It was 7:30 a.m. and that was the time Johnny Ussery, 7, and his brothers, Lane, 5 and Brett, 4, usually got up and were taken to Hopland School by their grandmother.

But there would be no school for the boys that day as they stepped from their trailer home along highway 101 six miles south of Ukiah to find their mother brutally beaten and strangled to death with a leather thong.

Clyda Dulaney, 24, wife of a California Highway Patrolman was lying on the ground near the trailer door.

The grisly find was not complete, however, until the boys ran next door to find their grandmother, Nancy Warren, 65, beaten and strangled in the same manner.

Sheriff-Coroner Reno H. Bartolomie said a triple murder had been committed since Mrs. Dulaney's unborn baby was eight months along and considered legally a human being.

The boys ran hundreds of yards across a field to their nearest neighbors, Mr. and Mrs. T. Torell.

Mrs. Torell called the Mendocino County Sheriff's office and waited with the boys at her house until deputies arrived.

Puzzling to lawmen was the fact that nothing was taken from either trailer by the murderer and the nearby antique shop that Mrs. Warren owned had not been entered.

Today, even though the victims' trailers are gone and the antique shop empty, the murder scene, which lies about 300 feet from the highway, still holds an aura of mystery and provides conversation from passing motorists. Sheriff Bartolomie admits his men are no closer to solving the murder than they were the morning the bodies were found.

A great many questions are still unanswered in the slaying and Sheriff Bartolomie said the biggest problem in his investigation is answering the question - Why?

"We don't have one bit of evidence", he said, "and we don't have any motive. If we could come up with a motive, it might make it a lot easier, but we don't even have a circumstantial evidence case against a possible suspect."

Sheriff Bartolomie has labeled the case "top priority" and has assigned his top man to it with instructions to "drop everything" when a new lead comes up.

That man is Senior Investigator Earl Friend, who joined the department in 1956 and became an investigator in 1960. Since then he has worked on the Braun and Maine murder case, the Hopland Bank robbery and the Charles Ray murder investigation.

And while Mendocino County authorities have spent hundreds of man-hours in the last year checking new leads and suspects, the family of the slain women have offered a $1000 reward for information leading to the arrest and conviction of the killer, or killers.

Friday, a suit was filed in Mendocino County Superior Court by the relatives asking $20,000 general damages, funeral expenses and "punitive damages in a reasonable sum."

The action was filed against fictitious persons - "John Doe, Richard Doe and Jane Doe" - in a highly unusual legal move to keep the civil case open, since the statute of limitations would expire tomorrow.

Morris Mawson, Santa Rosa attorney representing the children of Mrs. Namcy Warren, said that the sole purpose in filing the case but admitted it may never get past the preliminary stage unless lawmen identify and charge a suspect who can be served with a copy of the complaint.

He made the move on behalf of Edna M. Miller, Modesto; Catherine C. Hjertberg, Maryland; Nancy V. Stephan, Santa Rosa; and Clyde Warren, Ukiah; and said he has not talked with Mendocino County authorities or to Ukiah attorneys representing the family.

The suit, filed in civil court, also opens another possibility, which might open a wide swath through the case, in that Mr. Mawson said he may later seek Superior Court permission to take depositions from key witnesses under oath.

The filing of a suit against an unknown defendant is unusual enough and a number of attorneys, including Mendocino County District Attorney Duncan James doubted it could be done. However, taking depositions from possible witnesses before a defendant has been served with a complaint is even more unusual.

Mr. Mawson told a Press Democrat reporter he still had not decided definitely on that step, but said there was a good chance a judge would grant him permission under the circumstances and "to preserve testimony" from the large number of key witnesses.

The route that civil action takes differs in great part from the road being followed by lawmen, but both lead to the same goal - identification of the murderer and conviction.

As sheriff's officers work on various theories that answer questions in the case, they also try to develop a mental profile of the suspect and the reason for the killing.

Sheriff Bartolomie said he talked with Mendocino State Hospital psychiatrists in the early stages of the investigation and they told him the killer "would have to be a homicidal maniac, or so mentally disturbed that you can't come up with a reason why he did it."

Investigator Friend says he does not understand "how a normal person can live with this on his conscience."

He said prints are on file with Sacramento technicians, as well as Federal Bureau of Investigations laboratories, and although efforts to identify them has thus far failed, every reported murder suspect arrested under suspicious circumstances that tend to match those in the Ukiah slaying are checked for possible identification.

Sheriff Bartolomie said the prints were left in Mrs. Warren's trailer by an unknown person, because early in the case all relatives, friends and visitors to the scene of the crime were fingerprinted and checked out.  None matched, leaving the conclusion the prints belong to the murderer.

And while that theory leads to a theory of burglary, Sheriff Bartolomie said after a sales slip was found for a jewelry box reported missing by relatives his officers have been unable to find anything else missing.

Sheriff Bartolomie said Mrs. Warren's purse was not disturbed, although it lay on a table just above the spot where she lay on the floor of her trailer when found and that more than $500 in cash was laying in plain view in her bedroom which was also not disturbed.

The second most important bit of evidence recovered from the scene is the leather thongs used to kill the two women- both exactly 36 1/2 inches long, an unusual length which has still not been traced by state technicians.

The thongs are being analyzed, particularly the oil in them, to find a further lead and that an initial study of them is soon to be repeated in the hopes of turning up something new.

There is strong reason to believe two people were involved in the slaying because both women seemed to have dropped on the spot where they were struck and there is very little signs of a struggle indicating they may have been held while attacked.

Mrs. Warren put up the fiercest struggle Investigator Friend said and "physical evidence" recovered from her fingernails shows she may have left a mark on her assailant however until State crime technicians have a suspect to match that with it offers little in helping solve the crime.

Investigator Friend is also somewhat disturbed by the lack of "panic" at the scene.  He said there was no evidence the killer went berserk and committed the murder in a violent rage.

"A killer who panics wouldn't use leather thongs to commit murder," he points out in support of his theory that a homicidal maniac is the murderer, or else the killer went to the scene with premeditated murder in mind and was prepared.

Without new evidence and no motive, Investigator Friend is relying heavily on the 12,000 bulletins sent out to every law enforcement agency in the nation for a possible connection to other cases.

These contain the details of the Ukiah murder, three photos showing Mrs. Warren's antique shop, one of the victims and the knot used to prevent the thongs from slipping, as well as the address and phone number of the Mendocino County Sheriff's office.

Investigator Friend said he has received hundreds of phone calls, teletypes and letters from agencies across the nation and all possible leads have been checked carefully and dismissed- thus far.

Sheriff Bartolomie says, "We'll find this man.  I think someone will pick up someone and he'll attempt suicide while in jail and we'll be able to tie him in to our murder."

With 34 years in the Mendocino county Sheriff's office, 15 years of that time as sheriff, he says, "this one has us bothered and we're frustrated by it.  I wake up during the night thinking about it," but he apparently has not dismissed his chance of solving the mystery.

Investigator Friend is also confident and his enthusiasm mounts at each new report of a possible suspect, and he said copies of the bulletin will be sent to any agencies that request them.

"We just keep looking for similarities" in new leads that are reported and until the right one comes along, "the only thing we have to work with is our own hunches and police ingenuity.  We'll just keep checking everything we find relating to the case."