"All the next day, from our lookout posts in the hills, we watched the National Park rangers driving back and forth like ants over the desert roads, looking for us. After it got dark, Charlie and I drove all night by the light of the moon, surveying his desert kingdom. He was very quiet, wound up like a spring. When we got back to Myers Ranch early the next morning, he handed me a double-barreled shotgun that had been stolen from one of the girl's parents before we left Los Angeles.

"'Go up into the attic there,' he said to me, pointing to a place where the attic extended out over the porch of the ranch house with gaping holes between the boards. 'Go up there with this and wait. When those two rangers come -- kill them.' He drove off and I climbed into the hot, dusty attic to wait." * 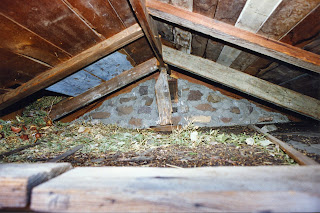 "You know that little hideaway in Barker's place? Well, I used to sleep up in there, and all the mice used to have to crawl over me to get out to go to the water, right? And I'd have these buckskin pants on, and they would start chewing on my pants.

"So, one night, when it was Tex's turn -- because what we'd do is like keep a point up there, and anybody would come, we'd listen to what they was saying. So, it was Tex's turn to see if the cops was gonna come up, you dig, so he was gonna be stashed there, you know, to see what the cops was gonna say. And we'd always leave a coffee pot there, and we'd leave a couple pounds of coffee and all that kind of stuff....

"So [Tex] was over that night, and them rats came out and started chewing on them pants. He freaked out and he couldn't deal with it. He run home to his mother, man. He left the pants there, man, and the rats ate a fucking hole in the pants and shit. Fucking rats ate my pants up. That's cold, huh?"

* This is one of the instances in his book where Watson confuses the Barker and Myers Ranchs. The old Myers ranch house, which burned down in June of 1999, never had an attic space such as he describes. The photo is of the attic space at Barker Ranch (also since burned down). -- GS