The Unhappy Odyssey of Linda Kasabian

As we all know Linda Kasabian was born Linda Darlene Drouin on June 21, 1949. But what happened before and after that.

She attended Milford High School in Milford, New Hampshire in 1964 and 1965. After her sophomore year she dropped out to marry Robert Moses Peaslee. 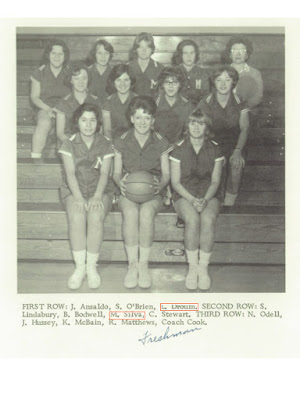 L. Drouin is pictured as a member of the freshman girls’ basketball team.

Unfortunately, back in 1964 the Freshman Class did not get a class picture in the yearbook. 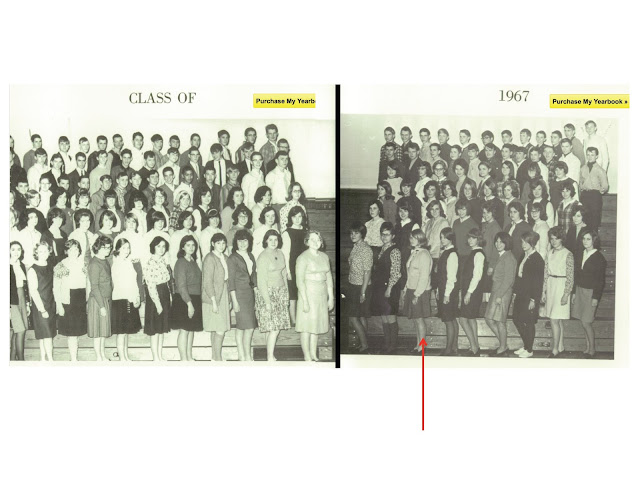 I am not sure where Linda is in this picture from 1965, her sophomore year. I suspect Linda is the young woman indicated by the arrow I added. Unfortunately, they also did not provide names with their class shots in Milton in 1965. 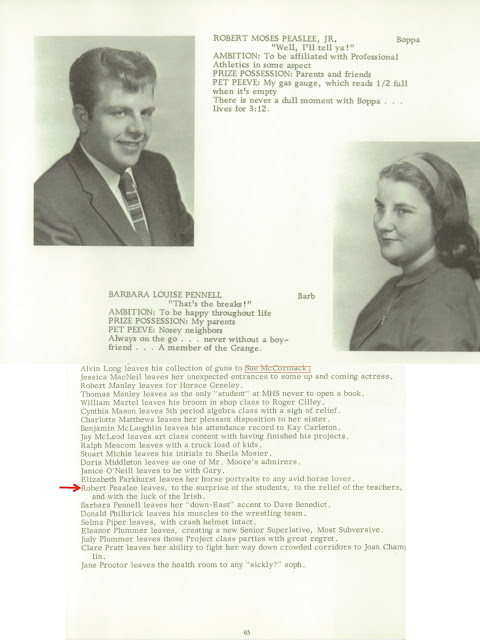 Peaslee appears to have been a bit of a wild child wracking up several traffic citations and listing as his contribution to the ‘Senior Will’ in the 1964 yearbook: “Robert Peaslee leaves to the surprise of the students, the relief of the teachers and with the luck of the Irish.” 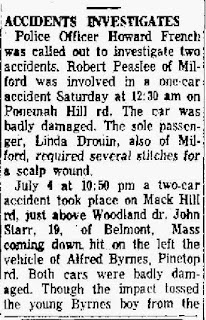 Linda married Robert Peaslee on August 14, 1965 but not before she and her fiancé were involved in a fairly serious car accident on July 2, 1965. 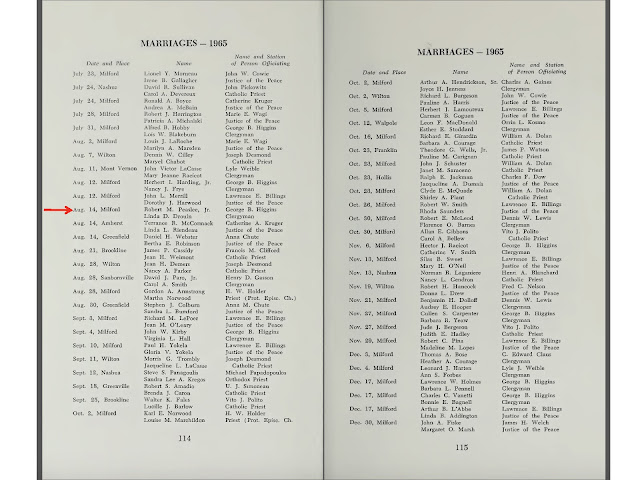 This is a record of the marriage from The Town of Milford, New Hampshire, Annual Report of 1965. The marriage date is recorded as August 14, 1965

The Peaslee/Drouin marriage didn’t last very long. By January 1966 the couple had divorced. The article refers to the court’s last ‘term’ and was written in May of 1966. However, if a ‘term’ is the same in New Hampshire as what I am familiar with she was actually divorced in 1965.

Peaslee sued and was granted a divorce claiming that his wife’s conduct was such as to “endanger seriously his physical and mental health” according to an article written in 1976 (see, The Unhappy Odyssey of Linda Kasabian, below). Peaslee’s case was uncontested but supported by the testimony of one Dr. Raymond P. Galloway a local physician. This is interesting as the allegation is not the typical ‘fault based’ mental and physical cruelty allegation I am familiar with from those days.

In the small town of Milford (pop: 5,000) this may have been a minor scandal.  Linda moved shortly after to live with her father in Florida.

Peaslee went on to have several run-ins with the law. He pled guilty to eluding a police officer in 1966 and in 1967 was convicted of public intoxication and assaulting a state police officer. He served a tour of duty in Vietnam in 1969 where he was wounded and passed away in 2002.

Linda Drouin returned to New Hampshire after a few months in Florida but didn’t stay. She moved to Boston sometime prior to April 1967. 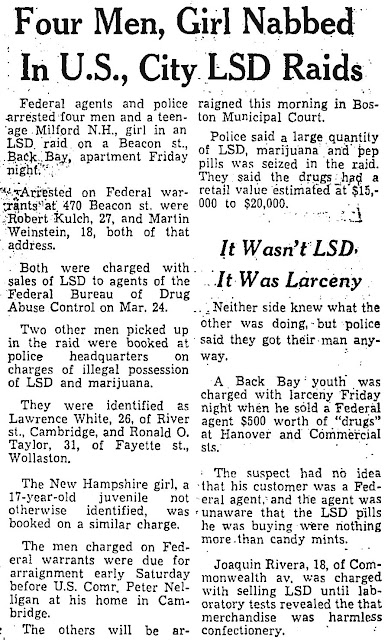 While her name is misspelled, Linda Drowing is Linda.

On April 14, 1967 Linda Drouin was arrested in a narcotics raid conducted by state and federal law enforcement in Boston. This appears to be a fairly big bust involving state and federal authorities and $20,000 worth of LSD and pot.  Robert Kasabian was not involved.

She was charged with ‘being present where narcotics are used'. Linda was 17 and based upon other cases I looked at before finding hers it appears to have been common for the authorities in 1967 to release female, juvenile offenders to their parents after arrest. Reading between the lines a bit that is what happened with Linda and she returned again to Milford dodging her first bullet.

Linda’s mother states that Robert Kasabian continued to pursue her daughter after she returned to Milford following her arrest in April 1967 (see, What Linda’s Mother Learned).  Mom clearly was not a fan of Kasabian and blames him for her daughter’s ‘downfall’.

At some point between April and September, 1967 Linda Drouin returned to Boston and Linda got pregnant. 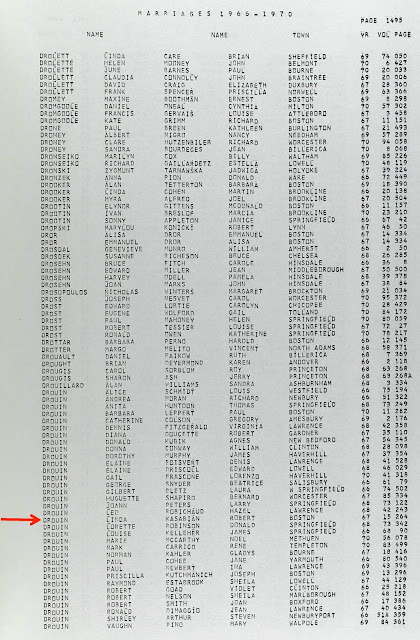 On September 20, 1967 she married Robert Kasabian.  She listed as her address at the time of the ceremony the American Psychedelic Circus (commune). (See, Odyssey [Exhibit 14, below] which also has a wedding picture). 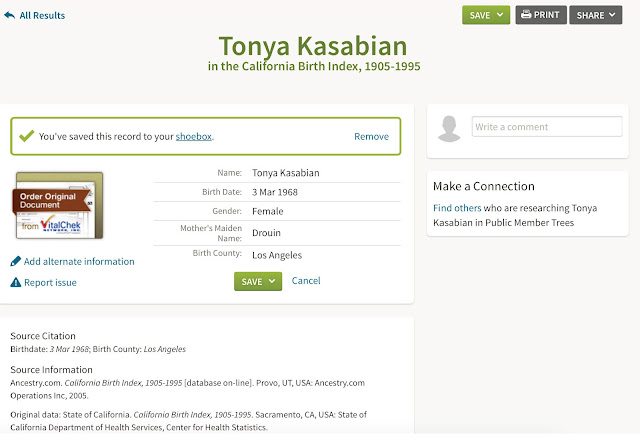 ‘Tonya’ Kasabian was born less then nine month’s later in Los Angeles on March 3, 1968. This places Linda in LA during the timeframe February-April (?) 1968. It might be interesting to see what else happened on the Manson timeline during this time - Harold True? 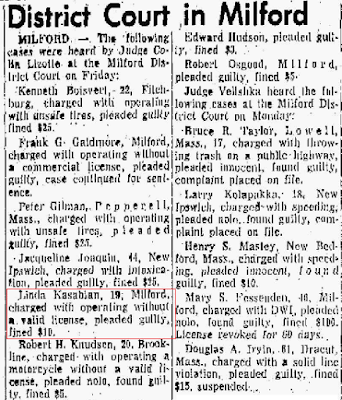 By May 1969 Linda had again returned to Milford where she had an intriguing run-in with the law.

On May 2, 1969 Linda pled guilty to operating a motor vehicle without a valid driver’s license. Given this event occurred a little over two months before she allegedly was chosen to accompany Watson et al on two nights of murder solely because she had a valid driver’s license it would be interesting to know which version of the offense was involved here.

It could either be she didn’t have a license with her when asked to present one and later produced it or it could mean she simply didn’t have a valid drivers’ license at all.  All I have been able to determine is that both resulted in fines in New Hampshire in 1969 and I have not been able to find the fine schedule. 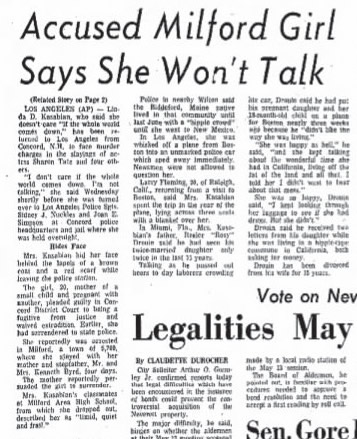 Here’s one I threw in just to challenge the ‘I was always going to testified anyway’ claim. She wasn’t on December 4, 1969. 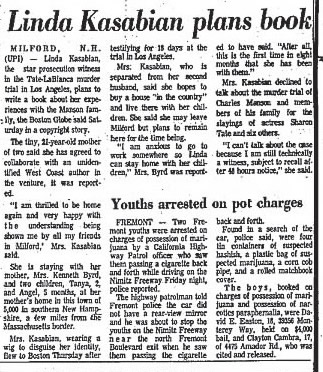 Linda intended to write a book after the trial. While not stated here Joan Didion was going to be the author. At Vincent Bugliosi’s request Ms. Didion bought Kasabian several dresses for the trial and likely had her change her hairstyle. 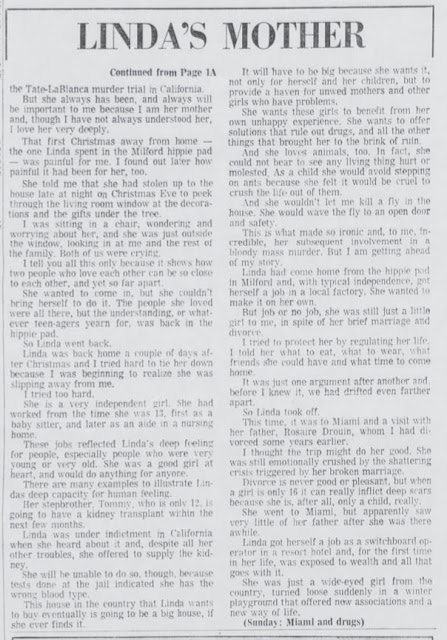 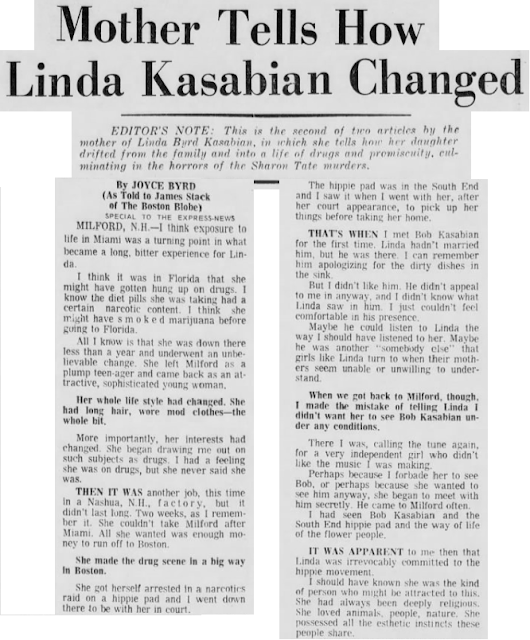 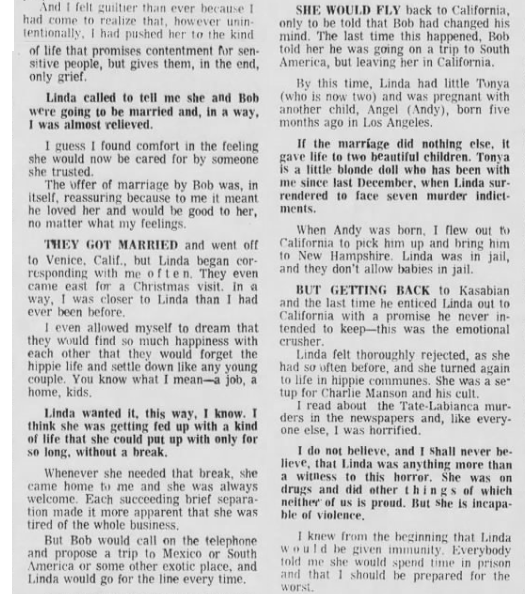 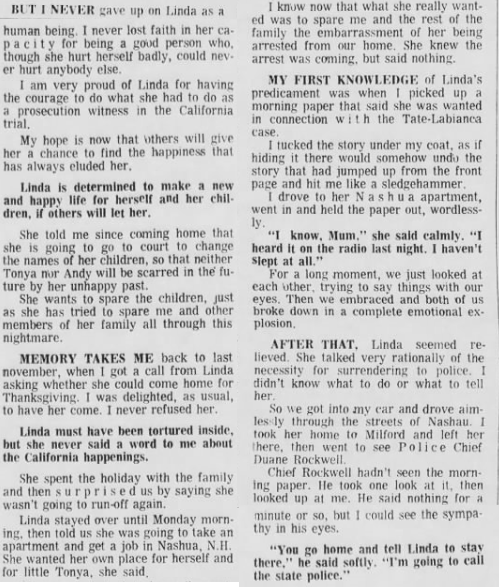 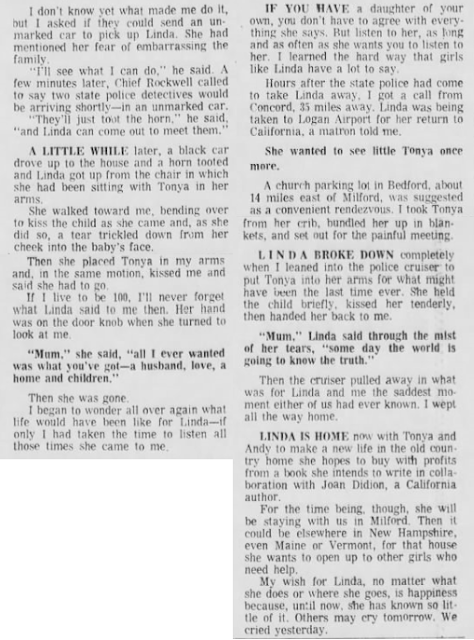 Written by Boston Globe reporter James Stack this series is Ms. Joyce Byrd’s story about her daughter. Stack wrote the piece as if it were written by Kasabian’s mom and even gave her the author credit.

It has some interesting information like mom noting Linda wanted to lose weight so she started taking three diet pills (speed) instead of the prescribed one to lose three times as much weight. Sure she did.

After her testimony ended Linda Kasabian gave a memorable press conference where she stated her intention to ‘move to the wilderness’, ‘find God’ and raise her children. Now let’s take a look at what really happened. 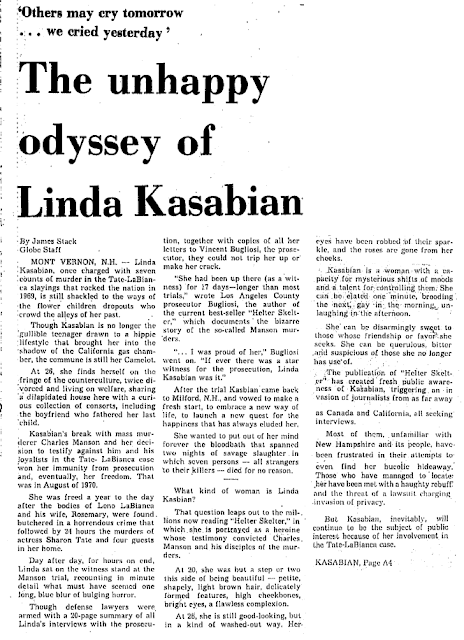 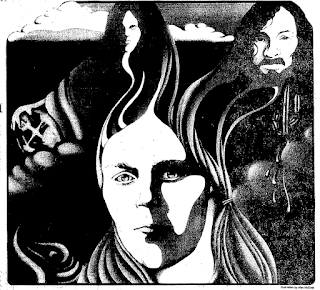 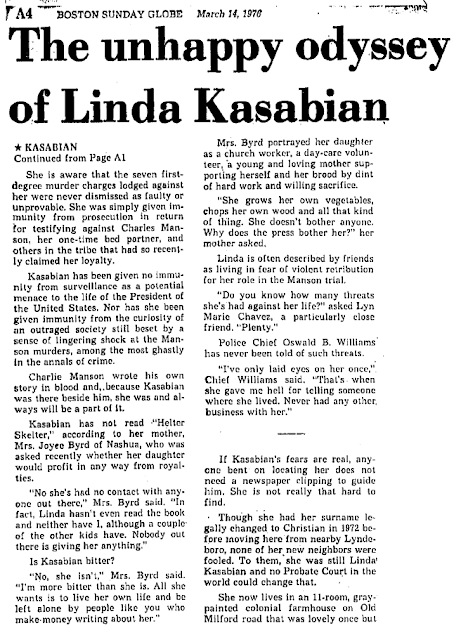 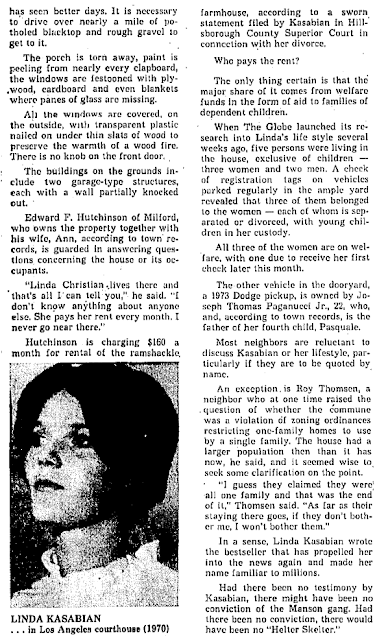 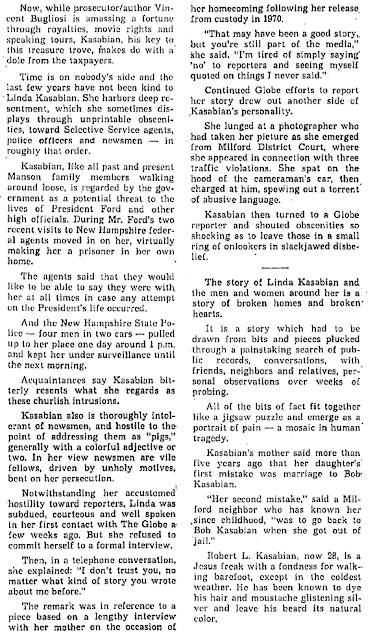 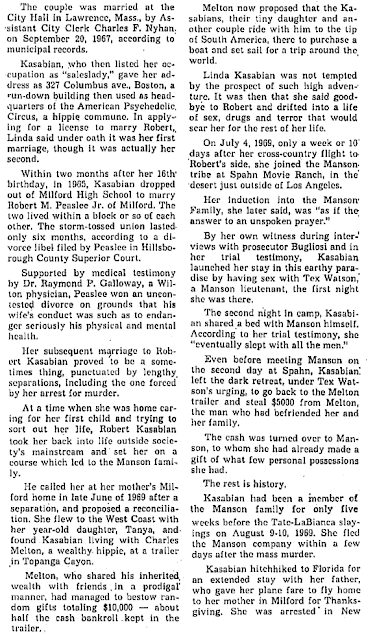 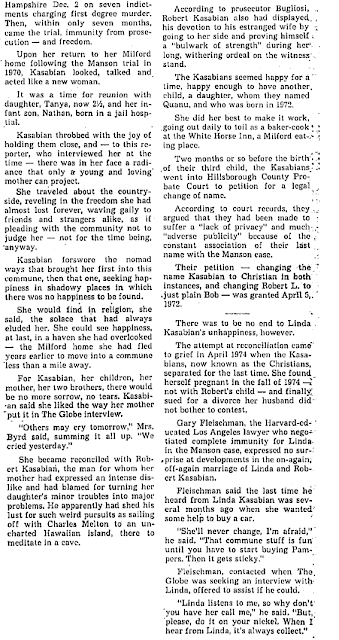 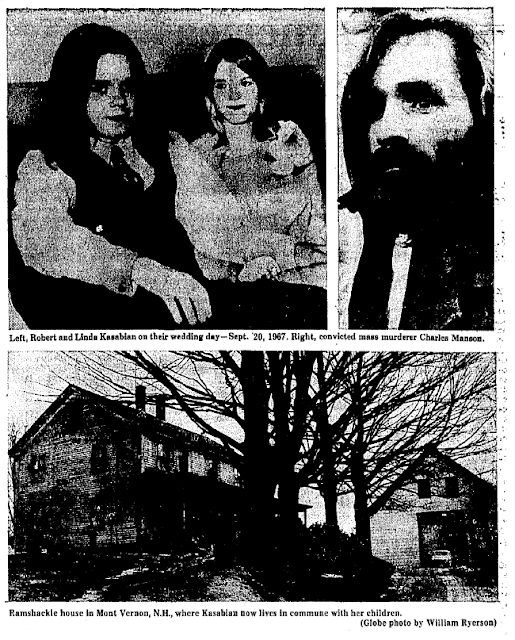 After Helter Skelter came out James Stack (author of mom’s story) tried to do a follow-up story about Kasabian and traveled to Milford for that purpose.

By 1976 Robert Kasabian is described as a ‘Jesus Freak’, which might explain the name change to ‘Christian’.

“Kasabian is a women with a capacity for mysterious shifts of moods and a talent for controlling them. She can be elated one minute, brooding the next, gay in the morning and unlaughing tomorrow.

She can be disarmingly sweet to those whose friendship or favor she seeks. She can be querulous, bitter and suspicious of those she no longer has use of.”

“Kasabian is also thoroughly intolerant of newsmen, and hostile to the point of addressing them as “pigs,” generally with a colorful adjective or two.”

“Continued Globe efforts to report her story drew out another side of Kasabian’s personality.

She lunged at a photographer who had taken her picture as she emerged from the Milford District Court, where she appeared in connection with three traffic violations. She spat on the hood of the cameraman’s car, then charged at him, spewing out a torrent of abusive language.

Kasabian then turned to a Globe reporter and shouted obscenities so shocking as to leave those in a small ring of onlookers in slackjawed disbelief.”

So much for the 'innocent hippy chick’.

This same article discusses the watch placed on Kasabian when President Ford came to New Hampshire in 1976.

She was arrested for an incident involving her efforts with others to prevent firemen from putting out a bonfire. The charges were reduced from ‘inciting a riot’ and the court appears to want the whole thing to go away.

This is a fun one: in 1982 she was arrested for flashing a motorcycle rally on a public street. 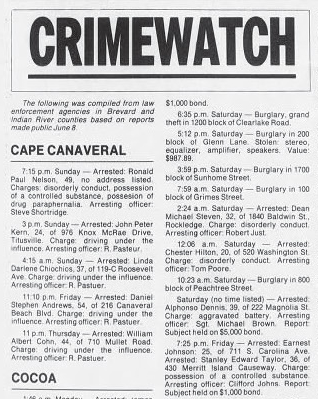 In 1987 she was arrested under the name Linda Chiochios in Florida near Cape Canaveral at 4:00 a.m. for DUII. 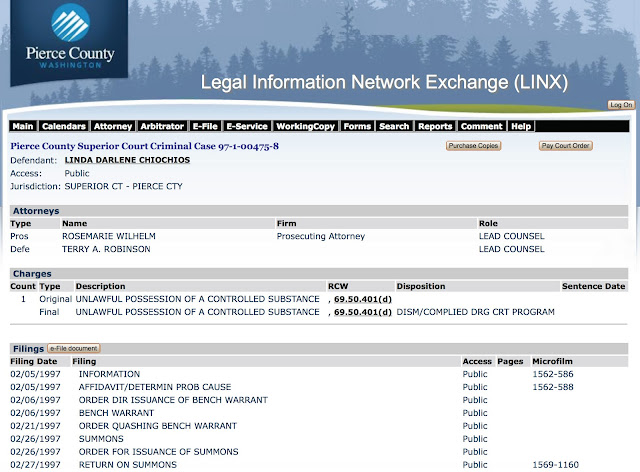 And in 1997 she and her daughter Quanu were arrested for possession of a controlled substance (meth) in Tacoma, Washington. The Pierce County court website can be used to pull up several of her family members and their friends. Kasabian, still Chiochios, successfully completed drug classes and her charges were dismissed.