The Brotherhood of Eternal Love 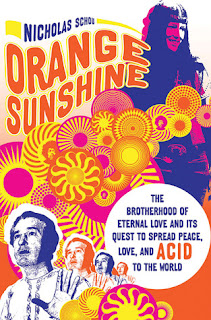 Patty has been spending some down time reading about the Brotherhood of Eternal Love which was made up of a group of friends who went to high school in Anaheim, CA and later settled in Laguna Beach (and beyond). They originally started out as a pseudo-religious organization and later morphed into a huge drug smuggling network responsible for the creation and distribution of a potent form of LSD called "Orange Sunshine," a strain of pot known as "Maui Wowie" and most of the Afghani hashish to be found in the US during the 1960's and 70's.

There are two excellent books on the topic which Patty has just finished: "Orange Sunshine" by Nicholas Schou and "The Brotherhood of Eternal Love (From Flower Power to Hippie Mafia: The Story of the LSD Counterculture) by Stewart Tendler and David May. 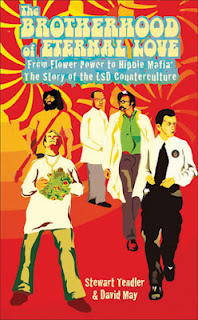 Patty finished the former first, and attempted to contact Mr. Schou at the OC Weekly where he is currently the managing editor. These are some of the questions that Patty posed to him:

1) BEL founder John Griggs died on August 3, 1969 in the only ever documented psilocybin overdose. The only one, EVER. Does that seem weird to you? Could someone have possibly been "cleaning house?"

2) In 1966, Griggs relieved a "famous producer" at gunpoint of his stash of LSD right in the middle of a dinner party. Who was that producer?

3) On pages 9 and 174, you mention the Charles Manson Family, and then back off again. Why? Do you think that Manson may have become involved with the BEL organization in San Francisco while eating at the Living Room soup kitchen?

Patty to date has received no reply from Schou.

Thanks Sunset for the link: