Who's damn car was it? 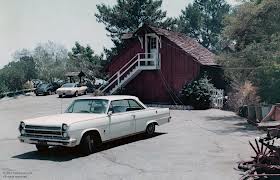 I have never really studied the Tate murder case in great detail, especially like some of our readers, but I will read documents I come across from start to finish. The majority of us can at least agree on one thing: this case is not 100% solved. There have been many things that I have come across that just don't add up to witness statements, police reports, photographs, etc. Well, take for instance, the first progress report the police did on Tate. In this report, the newspaper delivery guy SAW a white Dodge Dart or Rambler that had been parked outside the gate a few days before the Tate murder. That, in my opinion is more significant than other aspects. Was it Steve Parent? Why would Steve Parent's car have been parked outside the gate at 4:30 AM on Wednesday, August 6th? Or.....maybe it wasn't Steve Parent. Could it be that Bill Garretson had another late night/early morning visitor? I know one of the gardeners went up there, and brought a lady friend to make out with in the guest house, but it wasn't on Wednesday morning. Frankly, Garretson's story has never added up. He was asked some pretty blunt questions at his polygraph exam, which were, uh....mighty embarrassing to admit to a cop. I won't repeat the questions & answers, but it had something to do with having "relations" with the same sex. (Not that there is anything wrong with that!) This is from the First Tate Homicide Report:

Between 0430 and 0500 hours, Steven B. Shannen, deliveryman for the Times newspaper, delivered the paper to the gate of the Cielo property. As he approached the gate he noticed that there was a wire down and draped across the gate. He observed the yellow bug light on the north side of the garage to be on. He also stated that on Wednesday, August 6, at about the same time of day, he had noted a white Dodge Dart or Rambler sedan parked on the west side of Cielo just outside the gate. He was not sure of the make of the vehicle, but stated that it did have black-wall tires.


Shall we put our collective noggins together and discuss?