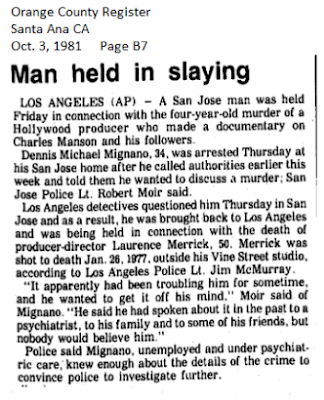 The Col asked in his debut post at this blog if Laurence Merrick's killer, Dennis Mignano, was still living.  The answer to that question is, yes.  He is 68 years old and lives in his deceased parents home in San Jose CA.  I did a little fact checking primarily on the three things that the article seemed to say contributed to Mignano killing Laurence Merrick.  The three things were the Mignano home burning down while he was in high school, the murder of a cousin and the murder of his sister.   This is what I found.......

His parents were Peter (Pete) Mignano and Rose Marie (nee Campagna) Mignano.   The family was living on N. 14th Street in San Jose in 1947 when Dennis was born.  They continued to live there until 1956 when they moved to Linda Vista Street in San Jose the year that Dennis's sister was born.  Dennis still lives in this home.  It's the home he lived in while going to high school.  When looking up the home on the real estate sites they all say the home was built in 1955.  While there may have been a fire in the home, it's doubtful that it "burned down" because if it was a total rebuild the year it was rebuilt would be reflected in the home's history on the real estate sites.
Here are two screen captures of the San Jose City Directory.  It looks like originally the homes on Linda Vista Street were given house numbers with five numbers.  The 1963 image, when Dennis would have been in high school, shows this.  In 1972 all of the homes on Linda Vista began to be re-numbered from five digits to three digits.  Looking at the available years of directories it seems that the Mignano's and one other family, the Autry's, were holdouts until 1976.  By then all of the homes had three digit house numbers.  Not only that the cross streets were re-named.  This was confusing and I wanted to be certain that the Mignano's were definitely in the same home so I went over each householder name and found quite a few of the same names in the 1963 and 1976 directories.  I put green tick marks beside the names of residents on the 1963 directory screen cap who also were listed in the 1976 directory.  This anomaly could make it appear that the Mignano's moved to a different home by the time Dennis murdered Laurence Merrick when in fact they did not. 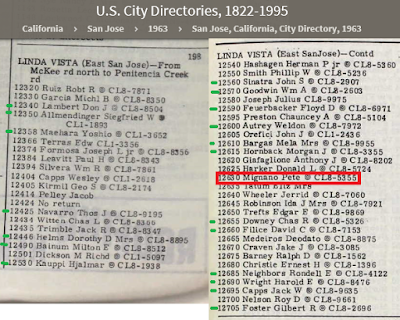 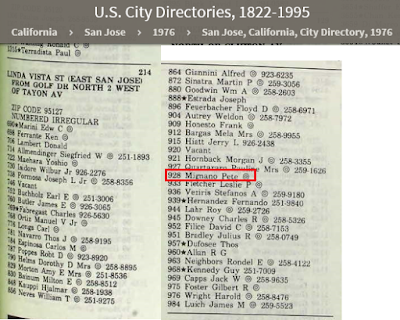 I used censuses and family trees at Ancestry to determine who Dennis's cousins were, there were plenty and I stuck to first cousins when trying to figure out which cousin could have been murdered.  I could come up with only one cousin who had died in the years before Laurence Merrick was murdered.  His name was Gerald James Campagna, his father and Dennis's mother were brother and sister.  I was able to find a newspaper article published at the time of his death.  The article gives the boy's name as Terry Campagna but I believe this is a typo and should read Gerry.  The age of the boy in the article matches the age of Dennis's cousin and the date of death is the same in the article and the California death record. 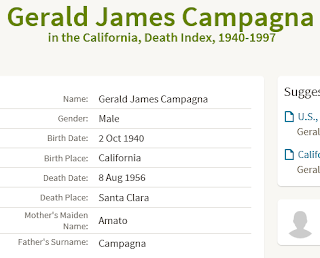 The trouble with this is that Gerry was not murdered, he was killed in a car accident.  The words killed and murdered are interchangeable in some instances but they should not have been in this instance.  However, the cousin did die at 15 years old in a rather grim way when Dennis was just shy of 9 years old.  It could have been traumatic for him. 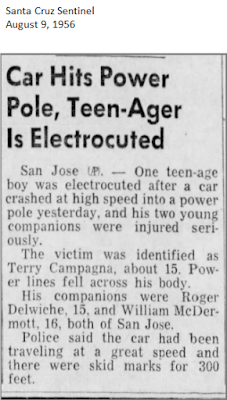 The death of Dennis's sister was a straight up murder and she did hang out with bikers and even danced topless at a bar.  While her murder was certainly tragic it did not happen until six months AFTER Laurence Merrick was murdered.  The murder was never solved.  To my knowledge no one was even arrested though a couple of Hells Angel's were looked at.  Given Dennis's mental state during that time, if I were law enforcement, I would have gone back and looked at him for killing his own sister.  Maybe they did, who knows? 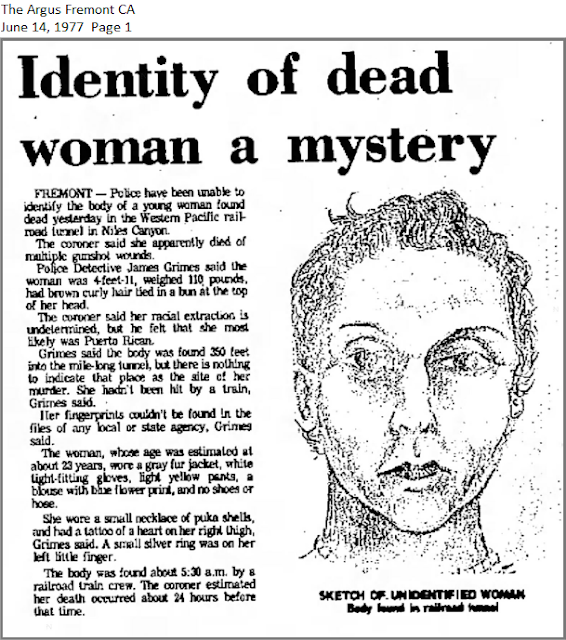 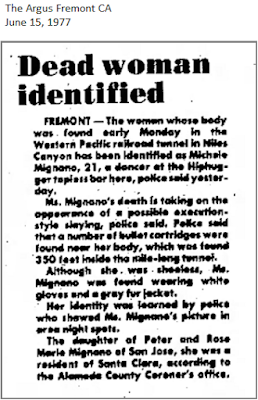 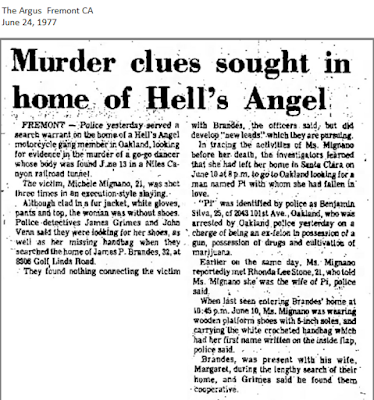 On to more current information.  I did a background check on Mignano and was surprised that his arrest for murder in LA County shows up. 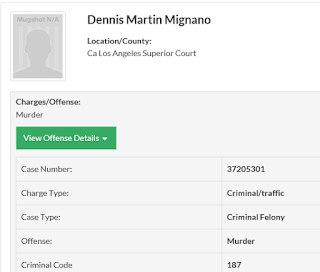 There were also two other cases involving Mignano on the report but other than providing a date and case number for each event there was no other information.  Both of the cases were in Santa Clara County.  I tried going to the Santa Clara County Superior Court website but their criminal online information only goes back to 2004.  One of the cases had a date of January 9, 1998, the other October 2, 1998 and they had two different case numbers which leads me to believe they were separate cases.

I was able to find one civil case for harassment against Mignano.  This was initiated in 1997 and disposed in 2007.  I have redacted the woman's name. 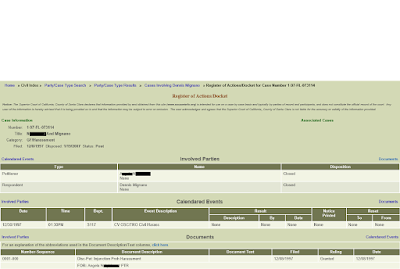 I could find no indication of what Mignano does or did in the way of employment.  I could not find any email address or social websites connected to him.  He has no online presence as near as I can tell.  He is not connected to any addresses other than the one family address that has been his since he was nine years old in 1956. 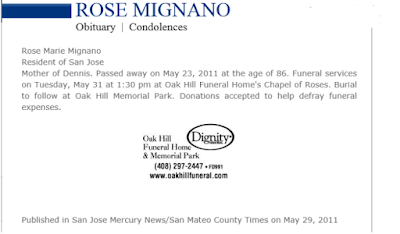