This is the master list of anomalies concerning discrepancies between physical evidence and the more-or-less official narrative.

Thanks for your suggested additions.

The items on this list are fundamental to the events and to the sequence described in the official narrative, but they directly contradict the narrative.

1) Blood evidence at the doorway/porch.

This is at odds with all testimony.

At odds with all testimony.

3) Stab wounds on Tate's back.

No version of the narrative unambiguously describes a situation in which she was attacked from behind.

The items on this list raise questions about variations from the official narrative, but are not in themselves contradictory.

Explained as being done by Parent, but without much detail.

Watson has mentioned at least twice that he inflicted cuts on Tate's face as the first wounds; the Noguchi autopsy report and testimony say they are rope burns.

3) Knife found at the scene with no blood evidence.

The knife found in the chair had no blood on it, but appeared to be coated with some unidentified substance.

4) Moving or rearranging some of the bodies.

Initial investigators state that they believed that Tate's body had been in some sense handled or moved.

5) Glasses near the trunks.

Unexplained in the official narrative.

6) Blood trail on the trunks.

On close inspection the blood trails on the trunks appear to have been made while the trunks were in a different position than in which they were found.

There was a  purple scarf found on the front lawn near Frykowski. This scarf had Sebring's blood type on it. 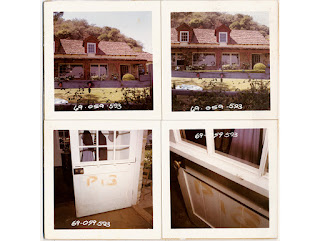 8) Purple ribbons found on front door handle (or inside house).

This will take some digging. I've read about it in the 1st progress report, I think, but not much elsewhere. Blood type is identified simply as "O", no subtype.

Looking at the many available aerial photos of Cielo after the murders, I notice Abigail's Firebird parked considerably further away from the fence than Jay's Porsche. The fence I refer to here is the wood rail fence that separates the parking area from the front lawn. Why?

Looking at a photo of Roman in Life magazine on the Cielo porch a week after the murders, and I see one of the carriage lights on either side of the front door is burned out. Susan Atkins said that after turning out the lights inside the house, there was enough light coming in the windows from outside to carry out their attack. Makes one wonder if one of those lights was burned out on August 8th. Perhaps those lights were left on for a week post murders, and one of them burned out in that time.

11) The mystery of the dog that did not bark.

Christopher, Rudi Altobelli's Weimaraner, was let out by Bill Garretson, ostensibly unattended. Susan Atkins says she saw a "hunting dog" looking in at her while in the house. I believe this is a true statement, and I believe she saw Christopher. My question is: if Christopher was on the lawn during the attacks, did Tex or Patricia encounter him? How did Christopher make it back to the guesthouse on his own, and unhurt, if he was in the presence of armed killers. It is known that Christopher could sometimes be a mean dog, and at one time even bit Rudi. One would think that he would have barked wildly, and perhaps try to attack at least Tex, Patricia, or even Linda.

I'll try to develop new articles, each of which focuses on one or more of the anomalies. I invite other readers to do the same. As each anomaly is addressed in an article I'll modify the master list to show that it has been covered.

What I may do is to go back to this list, and modify it, adding a hypertext link to the new article that deals with the anomaly in greater depth. The list could then become a sort of reference work with pointers toward supporting (or at least expanded) details.