From during the height of the Guns N' Roses brouhaha: 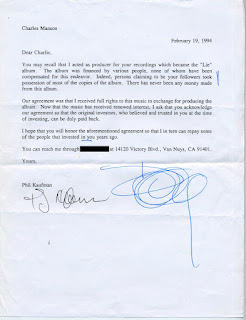 I know that you may have been preoccupied for the last 25 years but I'm sure you recall that I acted as producer for your recordings which became the "Lie" album (such "producing" consisting of setting up a brief, one-off recording session. I never had the album actually produced or promoted when you were still a free man and it might have done you some good.). The album was financed by various people, none of whom have been compensated for this endeavor (and who have thus suffered hardships that you can't imagine). Indeed, persons later described as your "followers" came to my house (from the house next door, which I arranged for them to stay in) and took most of the 20 or so copies of the album that were initially produced. (I called the cops on them.) There has never been any money made from this album (by me, that is, because it has been pointless for me to pursue the innumerable shadowy individuals who have been selling and presumably profiting from sales of bootlegged  albums and CDs of the music for at least the last 20 years).

But you -- I know who you are and where you are. And now I'm telling you that our agreement was that I received full rights to this music in exchange for producing 20 copies of the album (after you were imprisoned on charges of mass murder). Now that the music has received renewed interest (with a big money trail that can be traced), I ask that you acknowledge our agreement so that the original investors, who believed and trusted in you at the time of investing (but whose belief and trust  has been noticeably scarce since your arrest and conviction), can be duly paid back.

I hope that you will honor the aforementioned agreement so that I can in turn repay some of the people that invested in (and hoped to profit from) your notoriety years ago.