Manson Tour 2015: Benedict Canyon and the Surrounding Areas: Report on Strange Sounds, Gunshots, Indications of Violence, Related by Persons who were in Hearing Distance of the Polanski Residence on the Night of 8-8-69 and the Morning of 8-9-69 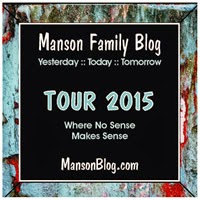 "It was so quiet, one of the killers would later say, that you could almost hear the sound of ice rattling in the cocktail shakers in the homes way down the canyon."

That's the opening line from Helter Skelter, and we wondered: Is it true?

So, while both Saints were investigating the authenticity of the VW Bus at Murphy Ranch - Matt, ColScott, Julie & Jiri headed out to Benedict Canyon... 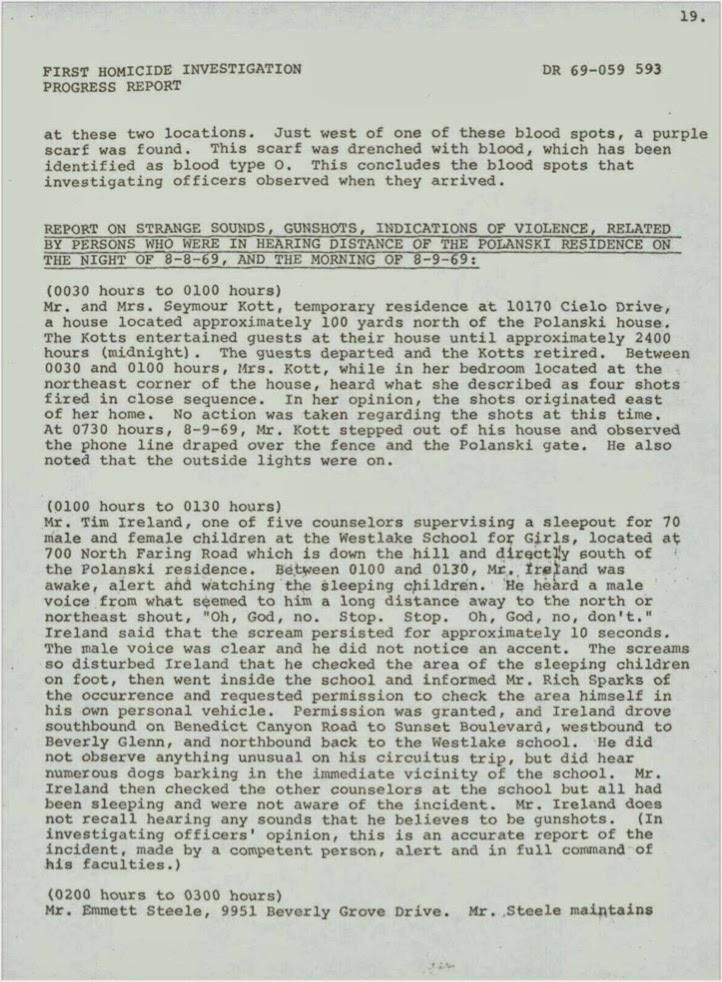 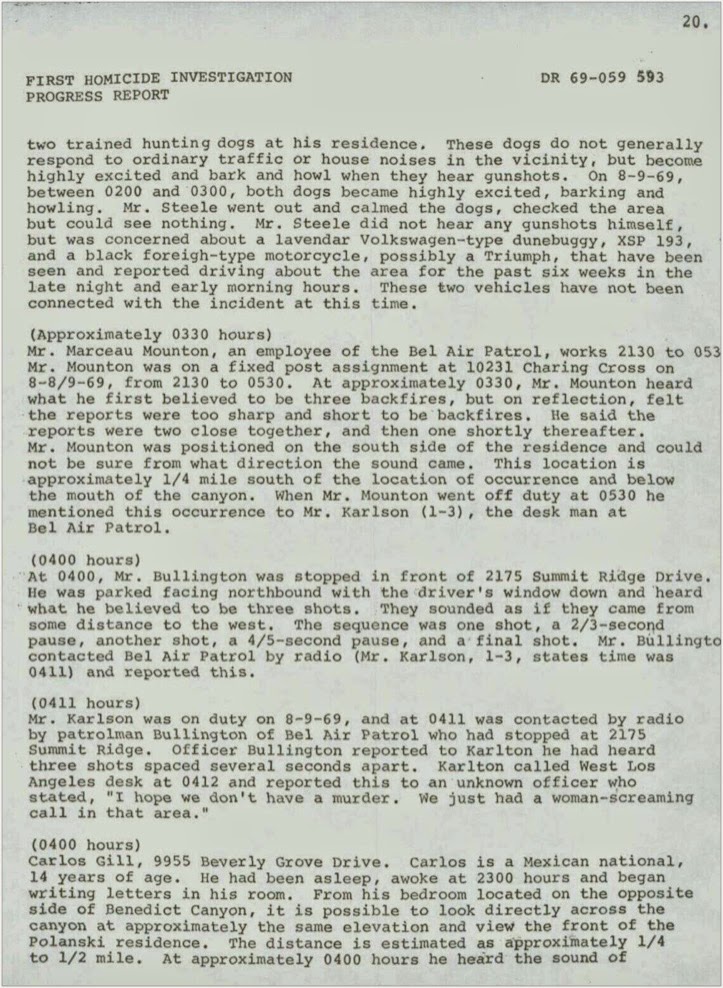 Bugliosi based his entire timeline on a clock radio. He surmised that Steven Parent went to Cielo to sell Garretson the clock radio, so he plugged it in to demonstrate. Bugliosi also surmised that before leaving the guesthouse Parent unplugged it, marking the time 12:15AM.

The first timeline supporters were the immediate neighbors to the Tate/Polanski house at 10070 Cielo Drive where Mr. & Mrs. Seymour Kott resided. The Kotts said that they had dinner guests who left around midnight. The Kotts then went to bed. Mrs. Kott, while admittedly not looking at the clock or noting the time, said she heard, “in close sequence", what sounded like three or four gunshots. They seemed to have come from the direction of the gate of 10050 and she later guessed it to be between 12:30-1AM.

The second timeline supporter was Rudolph Weber—the garden hose guy living on Portola where the killers stopped to hose off the blood. During Weber's police interrogation with Sgt. Calkins, (thanks CieloDrive.com) Weber stated what time he found the killers at his house on Portola: "It must've been about 1 o'clock, I heard the uh, the sound of, running water."

Is it even possible for the killers to have arrived at Weber's by 1AM? With Bugliosi's timeline, Parent left the guesthouse at 12:15 AM and was murdered around 12:30 AM. Could Watson, Atkins, Krenwinkel and Kasabian round up, tie up, chase around, and eventually kill the remaining 4 victims, grab their extra clothes, hunt around for the missing Kasabian, run down to the bottom of the cul-de-sac, and drive the (approximate) three minutes to Portola by 1AM? It seems highly improbable. But if so, would that then cancel out the Kott's testimony?

The third supporter of Bugliosi's timeline was Tim Ireland. 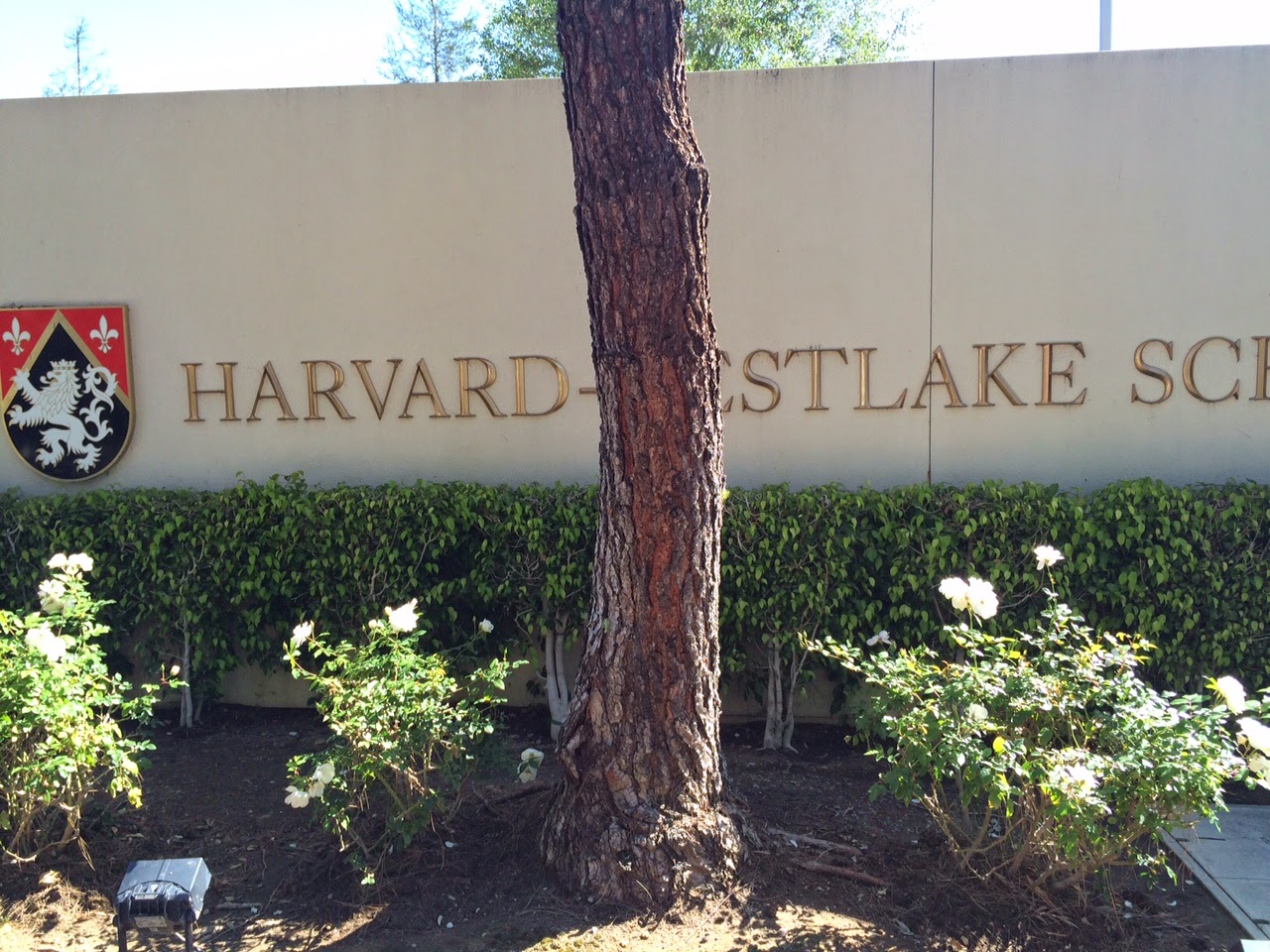 Ireland, was a school counselor chaperoning a group of girls during a sleep-over at the Westlake School for girls located at 700 N. Faring Rd. The police report notes: "Between 0100 and 0130 Mr. Ireland was awake, alert and watching the sleeping children. He heard a male voice from what seemed to him a long distance away to the north or northeast shout, 'Oh, God, no. Stop. Stop. Oh, God, no, don't'. Ireland said that the scream persisted for approximately 10 seconds. The male voice was clear and he did not notice an accent." 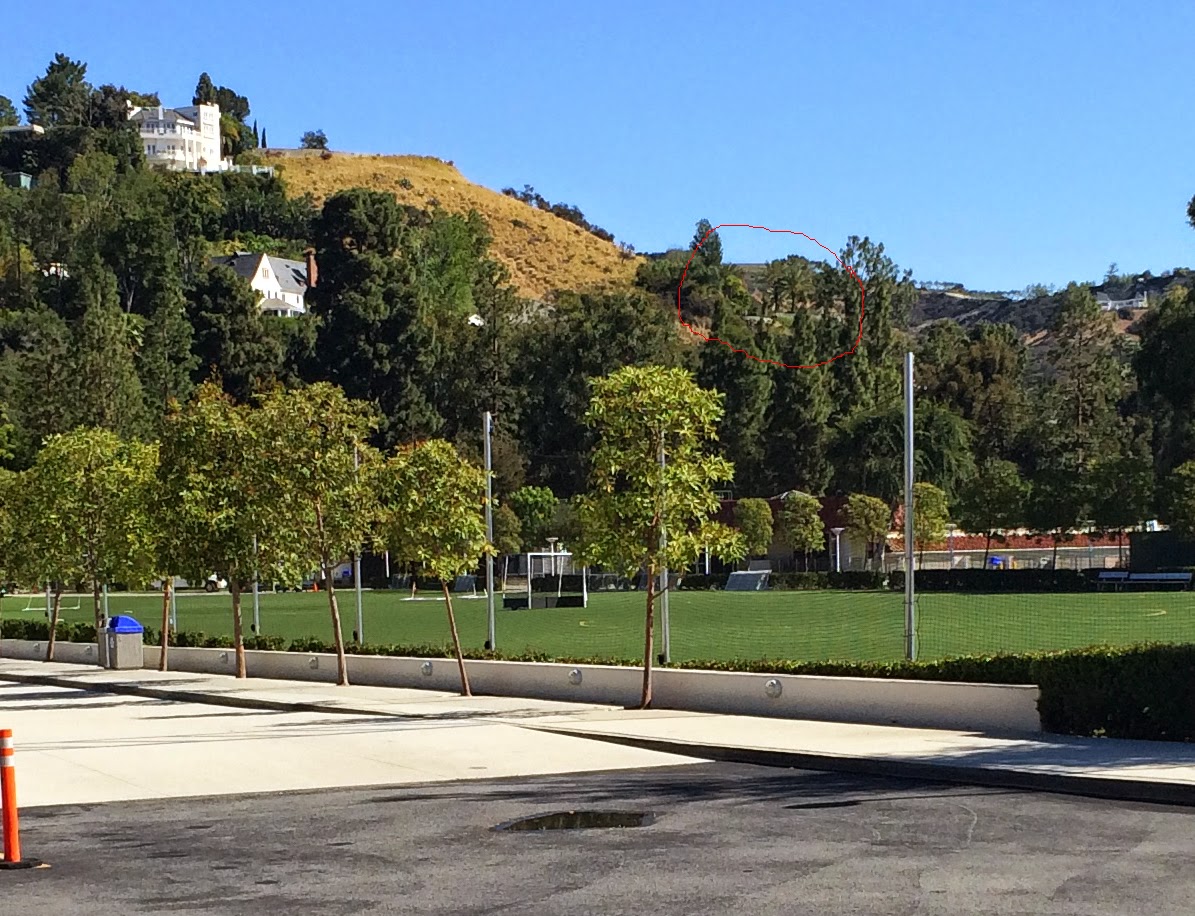 Since the area where Steve Parent was killed was on the other side of that hill and inside his car, chances are that the screams Ireland heard were Woytek Frykowski running for his life. But what about the time? Bugliosi can't have the victims being murdered at the same time Weber said they were hosing off the blood. Therefore, does Ireland's testimony cancel out both Rudolph Weber and the Kott's testimony, or vice versa?

There were other reports that didn't fit Bugliosi's timeline so they were discarded. But, should they have been discarded?  We decided to check out where those witnesses were in relation to 10050 Cielo Drive. And we were surprised by what we found; so surprised that it would be negligent to discount their statements.

At 0400, Bel Air Security Patrolman Mr. Bullington was stopped in front of 2175 Summit Ridge Drive. He was parked facing northbound with the driver's window down and heard what he believed to be three shots. 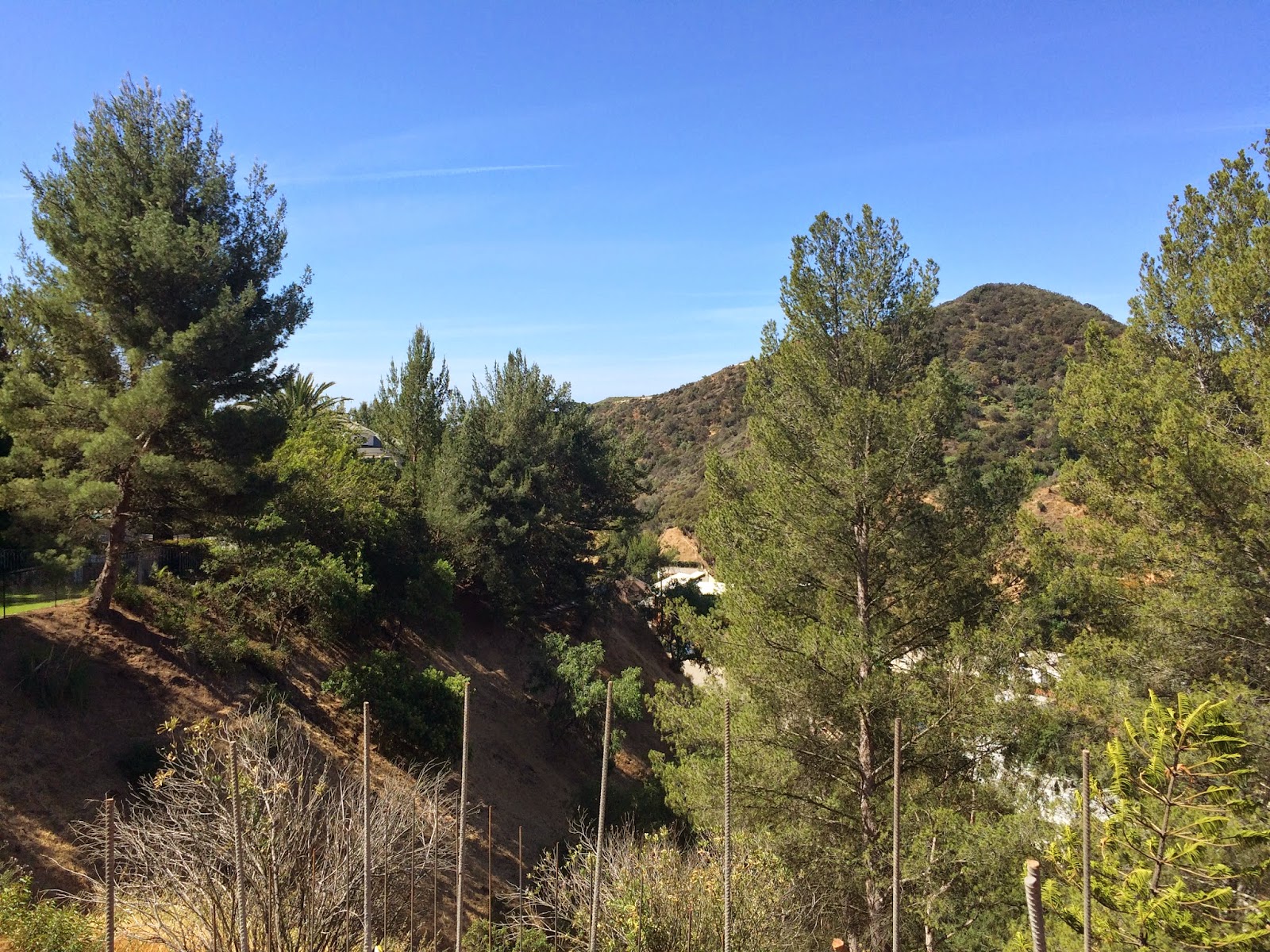 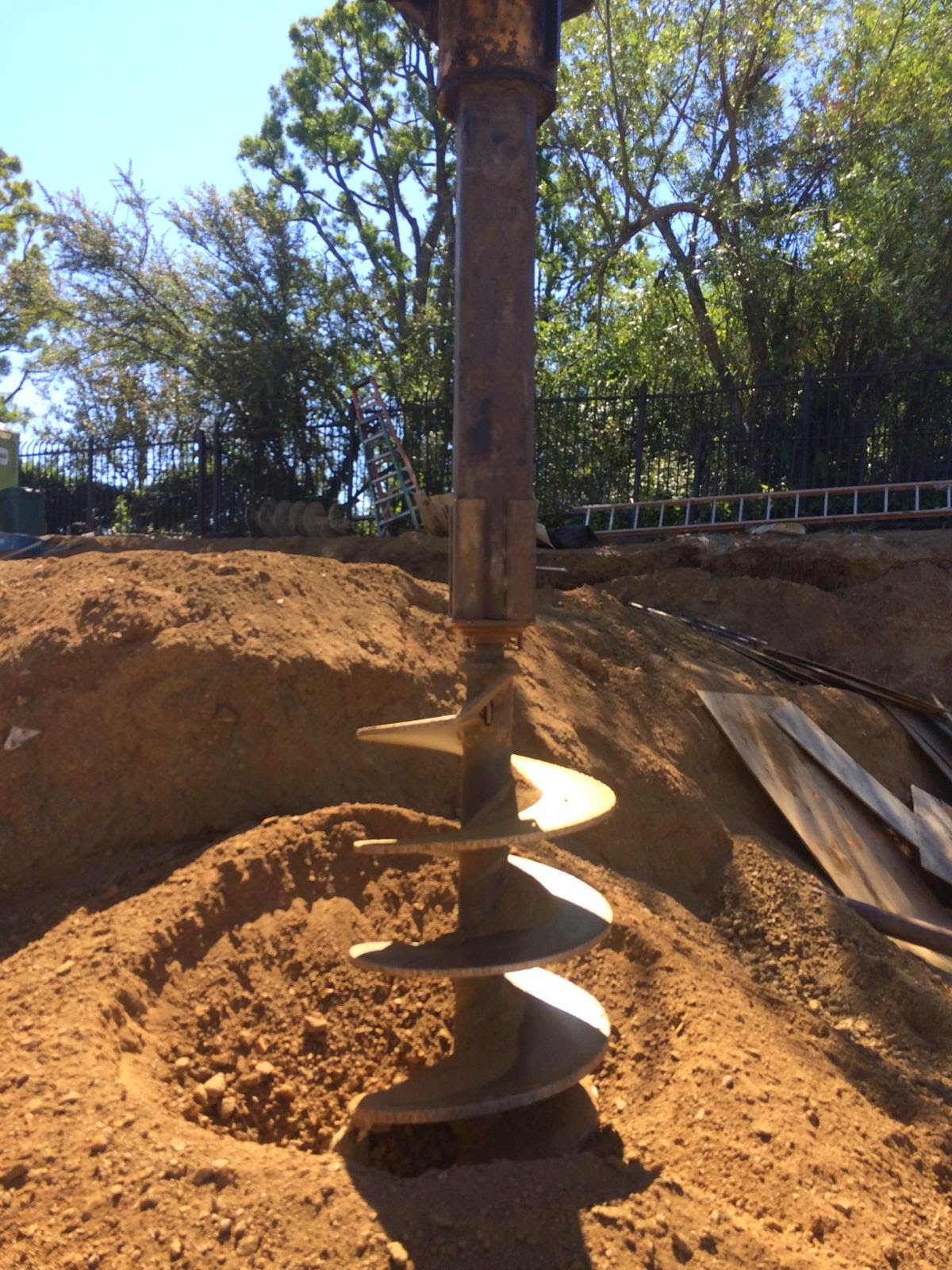 2175 Summit Ridge is a construction site currently
Note this large auger. We'll get back to it.

"They (the shots) sounded as if they came from some distance to the west. The sequence was one shot, a 2/3-second pause, another shot, a 4/5-second pause, and a final shot. Mr. Bullington contacted Bel Air Patrol by radio (Mr. Karlson, 1-3, states time was 0411) and reported this. (0411 hours) Mr. Karlson was on duty on 8-9-69, and at 0411 was contacted by radio by patrolman Bullington of Bel Air Patrol who had stopped at 2175 Summit Ridge. Officer Bullington reported to Karlton he had heard three shots spaced several seconds apart. Karlton called West Los Angeles (police?) desk a t 0412 and reported this to an unknown officer who stated, "I hope we don't have a murder. We just had a woman-screaming call in that area."

Bullington had an unobstructed "ear-shot" to the front lawn of 10050 Cielo. Following the Steven Parent shooting there were 3 additional gunshots: 1 to Jay Sebring and 2 to Woytek Frykowski. Can it be a coincidence that Bullington heard what sounded like 3 gunshots? And what about the 4:11AM report time? Not just one, but two witnesses (Bullington, Karlson) who are trained service officers for one of the most elite private security forces in the U.S. messed up the time? And what about the third unknown police officer who got the "woman-screaming" call at the same time?

Steele reported that he "maintains two trained hunting dogs at his residence. These dogs do not generally respond to ordinary traffic or house noises in the vicinity, but become highly excited and bark and howl when they hear gunshots. On 8-9-69, between 0200 and 0300, both dogs became highly excited, barking and howling. Mr. Steele went out and calmed the dogs, checked the area but could see nothing. Mr. Steele did not hear any gunshots himself, but was concerned about a lavender Volkswagen type dune buggy, XSP 193, and a black foreign-type motorcycle, possibly a Triumph, that have been seen and reported driving about the area for the past six weeks in the late night and early morning hours. These two vehicles have not been connected with the incident at this time."

Carlos Gill reported: "He had been asleep, awoke at 2300 hours and began writing letters in his room. From his bedroom located on the opposite side of Benedict Canyon, it is possible to look directly across the canyon at approximately the same elevation and view the front of the Polanski residence. The distance is estimated as approximately 1/4 to 1/2 mile. At approximately 0400 hours he heard the sound of voices arguing. He believed it was three or four persons. The argument increased in volume and became more heated. It lasted approximately one minute and then subsided abruptly. He indicated that in his opinion the sounds originated from the direction of the Polanski residence. At the time of the occurrence he stood by the window in his lighted room and looked in that direction but could see nothing. He said that the severity of the argument so frightened him that he went immediately to bed after closing the window." What's not noted is the fact that between 11:30PM-4AM Carlos, with an open window did not hear any gunshots between 1-1:30AM.

Zoom in on Carlos Gill's view at 9955 Beverly Grove.
The auger clearly visible on far left near the blue construction tarps. Tate property on right.


While we were in Benedict Canyon, we checked out one other item of interest. We wondered about the conflicting stories after the killers left the Cielo house, changed clothes as they were driving, hosed off, and then dumped the bloody clothing that was later found by KABC news team and Al Wiman.

Wiman claimed that based on Susan Atkins' testimony, they left from the Cielo house and "We timed ourselves and tried to place ourselves in the same position that the people would have been in that night after they left the Tate house. 6 minutes and 20 seconds of moderate driving up Benedict Canyon led us to this spot." In the later interview that we posted, Wiman says that from Cielo he started a stopwatch and that it took 6 minutes and 30 seconds to changes clothes: "I was changing clothes in the back seat of the car. And at 6 minutes and 30 seconds the first place that you could pull over was exactly that same spot we had been at that morning."

The problem with that theory is that Atkins also testified that they had changed clothes, but made a pit-stop at Weber's house to hose off the remaining blood before driving up Benedict to dump the bloody clothing. This would delay Wiman's 6:30 timing. So, we decided to do a test of our own with me as our Guinea Pig. 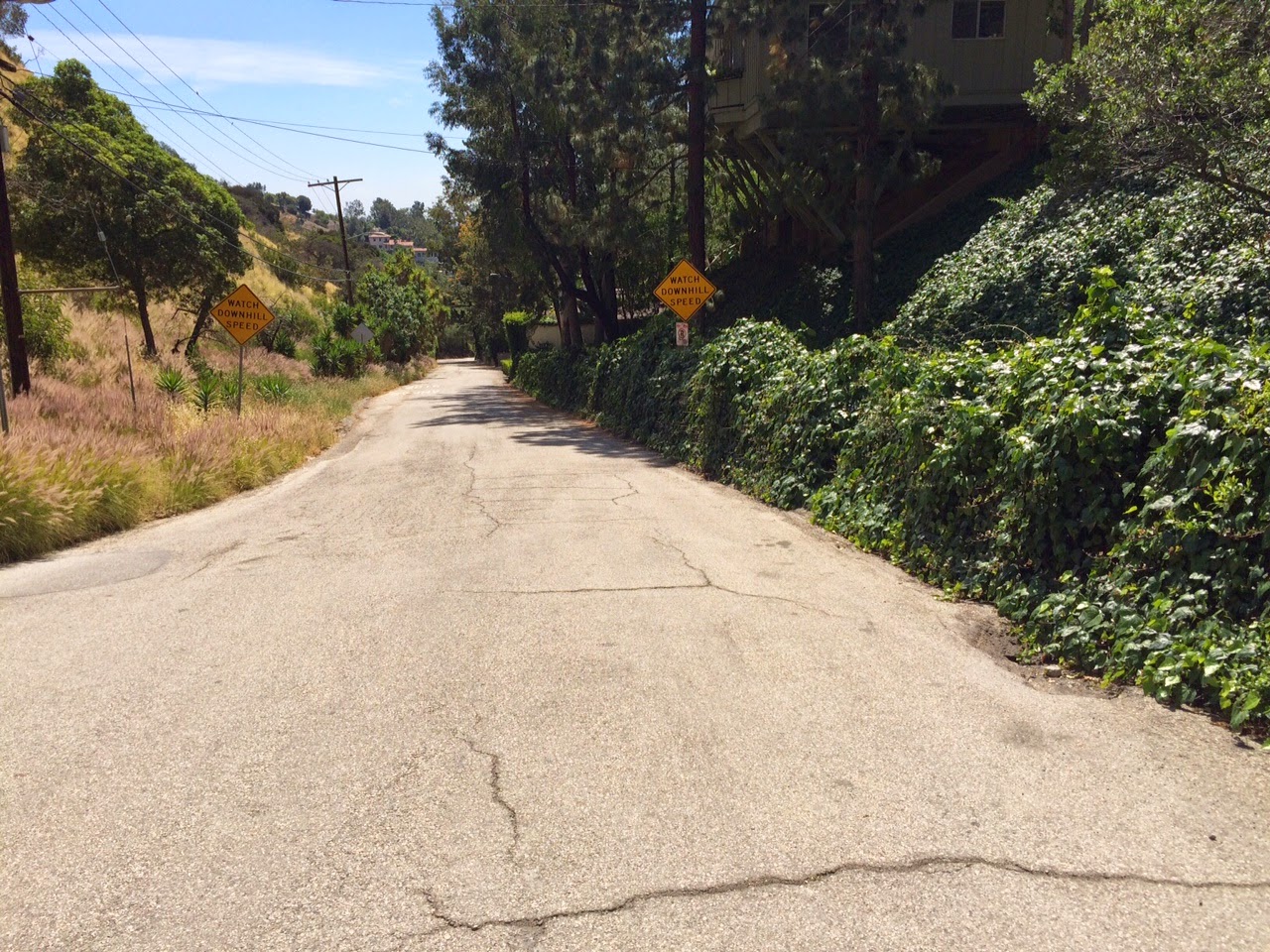 The spot where the car was parked during the Cielo murders

We started at the approximate area the killers said they parked the car. I put himself in the same circumstances that the killers would have been in (cramped back seat with 2 others changing next to him). With the car in motion I completed a full change-over in just 1 minute and 20 seconds. We hadn't even made it to Easton Dr.

But, what we did note as we proceeded to the dumping spot at 2901 Benedict Canyon, was that it was the first place between Cielo and Mulholland that had any type of accessible ravine. So, the series of events that happened in between those two locations doesn't really matter because it was the only initial place they could've inconspicuously dumped the clothes! 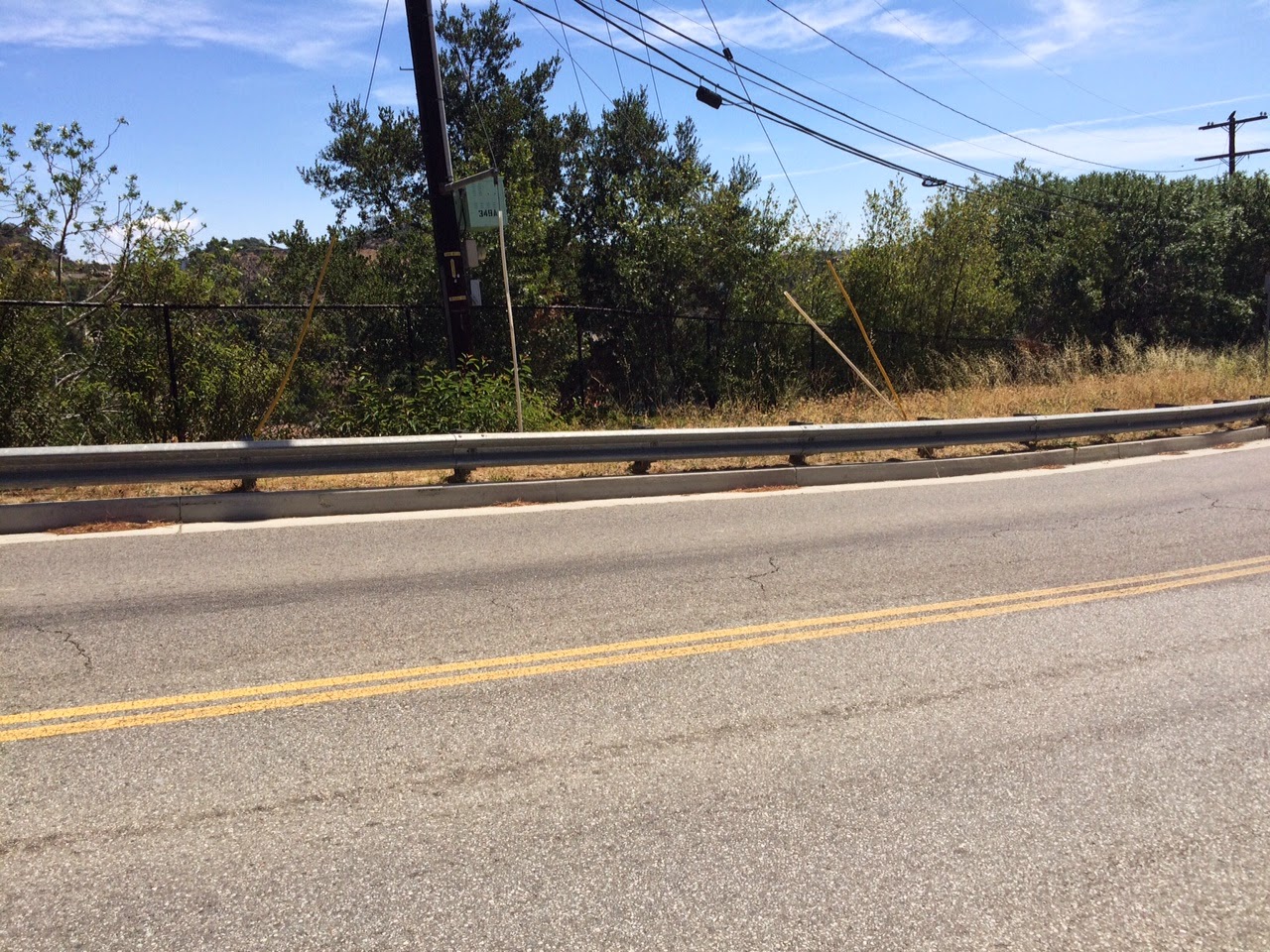 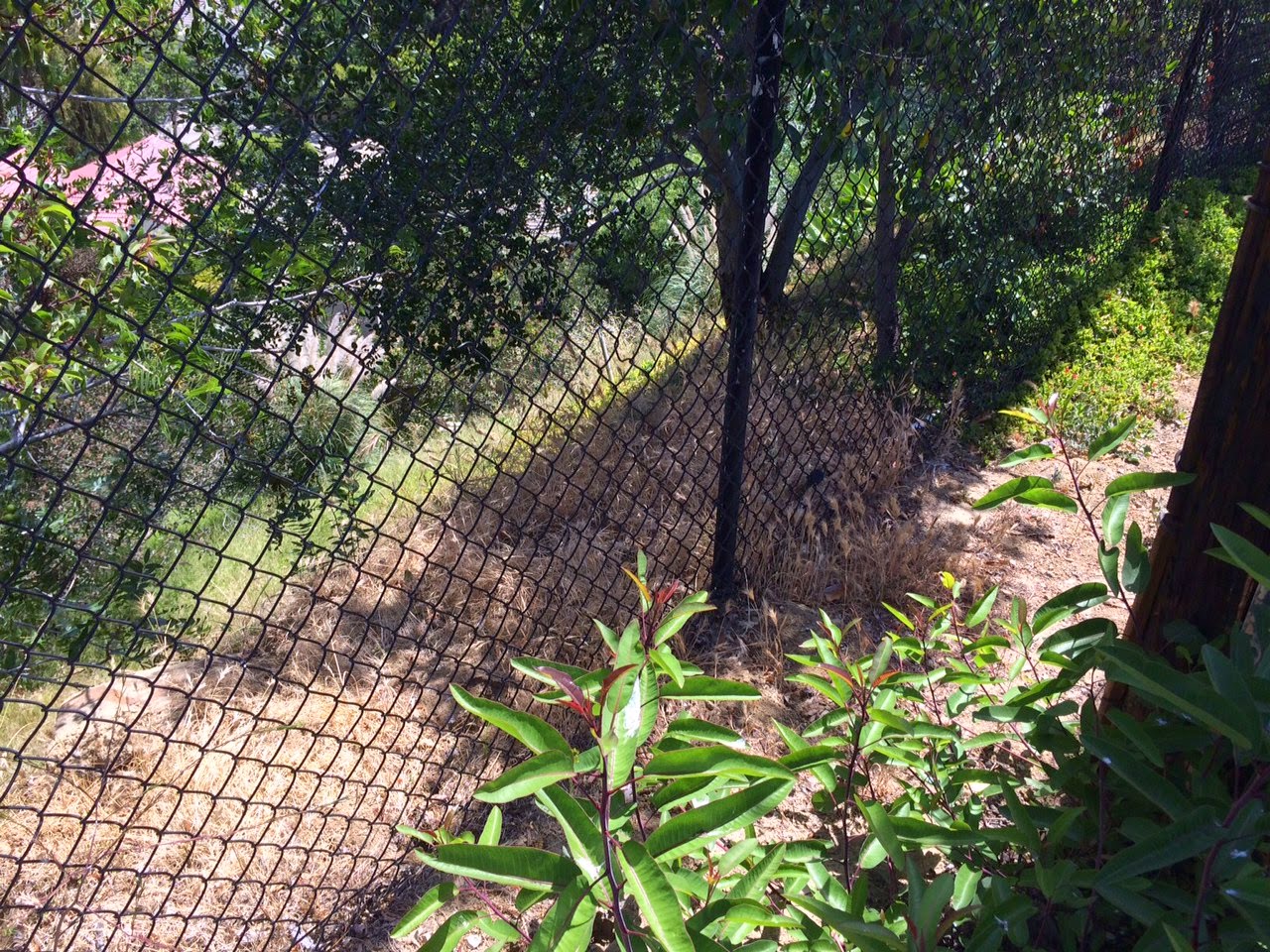 We did visit one other witness location, 10231 Charing Cross Rd., where at 3:30AM Bel Air Patrolman Mounton heard what he first believed to be three backfires, but on reflection felt that the reports were too sharp and short to be backfires. He said the reports were, two close together, and then one shortly thereafter, which concurs with patrolman Bullington. The location at Charing Cross Rd was at a lower elevation with surrounding high trees so it was impossible to see where in relation to Cielo this was.

For me, seeing the locations of the other 4 witnesses and their audio proximity to the front of Cielo, where 90% of the savagery occurred, gives enough reasonable doubt to the murders not occurring between 12:30-1A. Especially when you consider that Mrs. Kott and Mr. Weber both stated they were guessing at the time as opposed to patrolmen who marked the time. So why was Bugliosi so insistent that the murders occured between 12:30-1A? Did he do it because of the one witness (Weber) who physically saw the killers and therefor placed them in Benedict Canyon on the night of the murders was more valuable than reality? 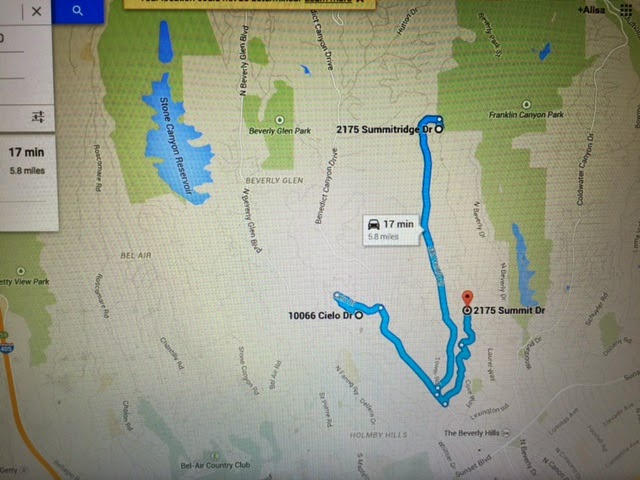 We were at the base of Sharon's cul-de-sac on Cielo. The killers only describe driving down the hill, parking, and hiking back up to the gate so it could be one of 2 places either where we were or there's a bit of an alcove on the cul-de-sac that would also be hidden and at the time, free of houses. 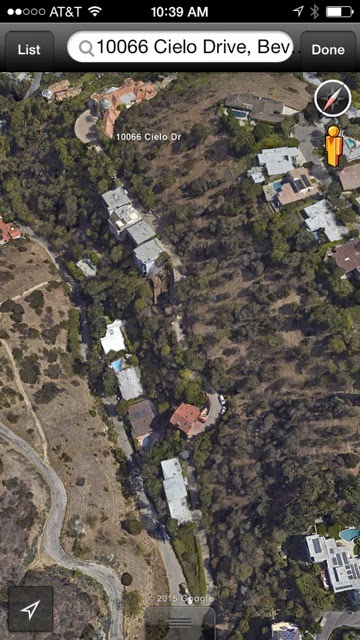 This one shows you the run of the cul-de-sac with 10066/50 at the top and the V where the cul-de-sac meets with Cielo proper - there's actually a car parked where we were in the screen shot. You can also see the alcove I'm talking about where the orange tile roof is. 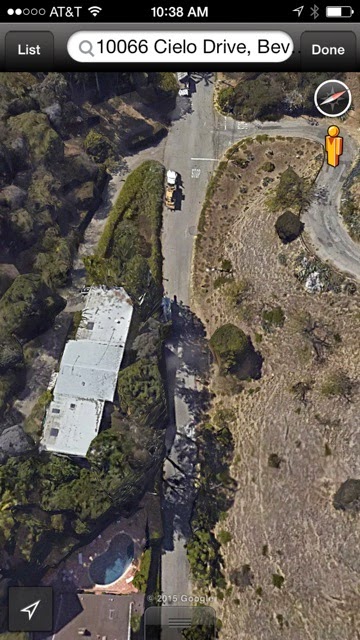 This is a closer shot of the base of the cul-de-sac where there's an intersection of sorts between Cielo, Sharon's cul-de-sac, and Bella Dr. - again, there's a car parked in the same spot where we started timing the drive. 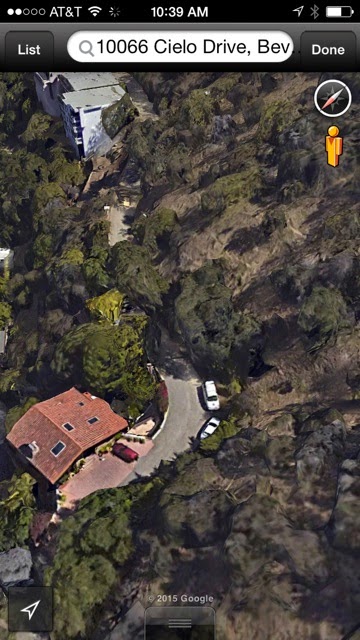 This is a closer shot of the cul-de-sac area where they may have alternately parked - where the 2 white cars are parked in the shot.