Recently I was reading the First Homicide Investigation Progress Reports for both the Cielo and Waverly Drives homicides and I got interested in the layouts of the crime scenes and what those layouts can tell us.

I would take any opportunity to visit a location associated with a crime I am interested in, and all the more so to the precise locations where the crimes actually happened. But except for the place where Donald “Shorty” Shea was killed near Spahn’s Ranch in late August of 1969 I’ve never been to any of the pinpoint murder locations associated with TLB. (Of course, I’ve been outside all of the places.)

I first went up to the gate at Cielo Drive in 1978. Back then it was the same gate setup as was there on the night of the murders. You could look onto the property and see the corner of the garage. Sometime in the mid-’80s that puny security arrangement was replaced with something more substantial.

In the early ’90s I was there again with some friends. One of them decided to see if we could get in, so he rang the buzzer. After a minute or so the gate (the big, new one) slowly opened and an attractive younger woman asked what we wanted. When my friend explained that I was a crime writer and wanted to see the property she was polite and friendly but turned down our entry request.

Of course now there’s nothing to see on that property, its fate being well known. 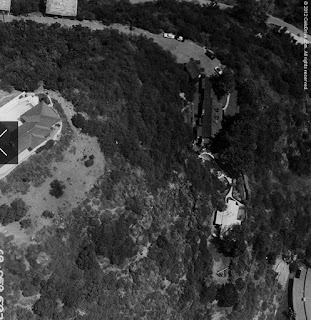 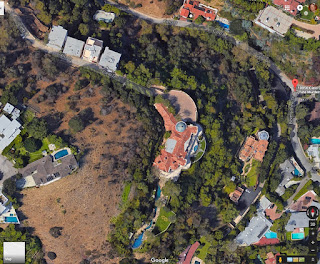 Google Maps view of the current Cielo property (Note the house on the hill to the left in both pictures.)

(I think that somebody should build an exact full-scale replica of the 1969 Cielo Drive property with everything — house, guest house, garage, pool, wishing well, lights on the fence — everything — so that students of the crime can go there and study it. Maybe in a cornfield in Iowa? Build it and they will come.)

The former LaBianca residence, on the other hand, is a different matter. The LaBianca property on Waverly Drive has likewise had a lot of work done to it, but the house, garage, and driveway areas remain largely unchanged. 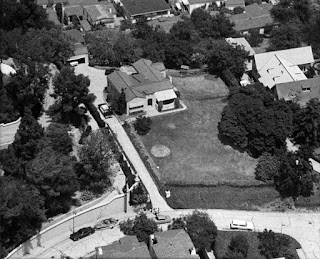 The LaBianca residence the morning after the murders there. The LaBianca’s boat is still on the trailer behind their car parked on the street to the west of the property. 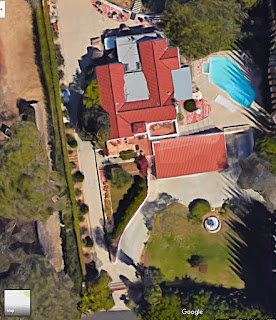 But a glance at these two above images makes it clear that much work has been done to the front and east side yards of the lot. In front a carport and additional driveway and parking area have been added. And to the east a swimming pool fills the area that used to be the side yard between the house and the property next door that was at one time occupied by Harold True.

There is general agreement regarding what happened immediately after the car from Spahn’s Ranch arrived at Waverly Drive late in the night of August 9-10, 1969: Charles Manson got out of the car and went up the curved driveway to Harold True’s house before cutting over west to the LaBianca house.This scenario is courtesy of star prosecution witness Linda Kasabian and is corroborated by Charles Manson himself.

At the murder trial Kasabian recalled that after their car parked in front of the LaBianca house she asked Manson, “Charlie, you’re not going into that house, are you?”

“He got out of the car. He disappeared up the walkway, the driveway, leading towards Harold’s house, and I couldn’t follow him any longer, he just disappeared.”  (From Linda Kasabian’s trial testimony as recounted in Witness to Evil by George Bishop, page 165)

Manson agreed to this version of events in a telephone call to me in 1998:

“And I went to see Harold [True]. Harold wasn’t there, and I looked over and I seen a light over on the other side, and I walked over there and there was a little dog there. So I patted the dog on the head and I opened the door and there was a dude sitting on the couch.

“I said, ‘I didn’t know anybody lived here.’

“And then Tex moved in and started talking to him. And I walked on out.

“It didn’t have a fucking thing to do with me.”

Further along in her testimony Kasabian indirectly corroborates Manson’s version of what he did at the two Waverly Drive properties (i.e., check out Harold True’s house and then briefly enter and exit the LaBianca house before coming back to the car) when she was asked, “How long after he left the car did he return to the car?”

Kasabian answered, “I remember we all lit up cigarettes, and we smoked about three-quarters of a Pall Mall cigarette, however long that takes.” (Witness To Evil, page 165.)

That would probably take about five minutes, tops, just enough time for Manson to do what he said he did, but certainly not enough time for him to have done all the things that Charles "Tex" Watson later said he did inside the LaBianca house (got the drop on Leno LaBianca, reassured him, had Watson tie him up, asked about other people in the house, disappeared “for a minute or two” before bringing Rosemary LaBianca into the living room, conversed with the couple, waited with the couple while Watson looked around the house for money, took Rosemary LaBianca back into the bedroom, returned to the living room to bind, gag, and pillowcase Leno LaBianca, went back into the bedroom and did the same to Rosemary, and then finally left the house — See Will You Die For Me?, pages 147-148).

So, by examining a crime scene, even after almost fifty years, one can still gain new insights into what might have happened there. In this case, combining the evident walking distances involved and the time frame established by Linda Kasabian’s Pall Mall, a fair and reasonable person might come to the conclusion that Charles Manson was telling the truth about what he did after he arrived at Waverly Drive on August 9-10, 1969. 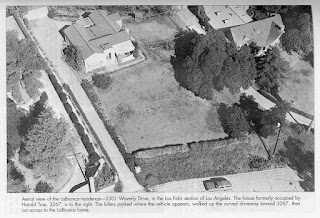 The LaBianca house from Helter Skelter 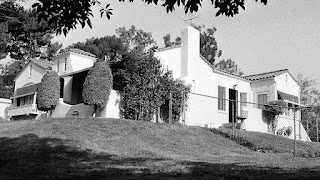 View of the LaBianca house from the east (True house) side 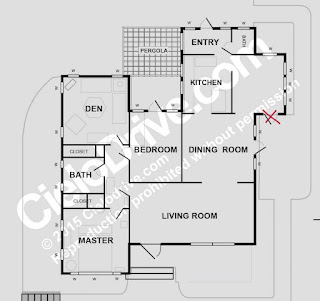 Diagram of the LaBianca house (courtesy of Cielodrive.com) 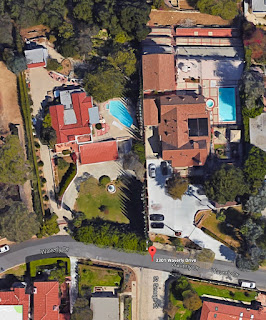 This present day Google Maps view of the LaBianca and True residences shows that a small building has been constructed in the area that was formerly the western entrance to the True house.

The former Polanski residence on Cielo Drive is long gone, but the LaBianca house and grounds have survived mostly intact. An examination of this latter property would no doubt prove very enlightening to any student of TLB. The MF Blog tried to gain access to the house as part of their 2016 tour but they were unable to do so. Maybe one solution would be to buy the house. Unfortunately, however, it’s not currently on the market. And in any case, it would take almost two million dollars to close the deal. 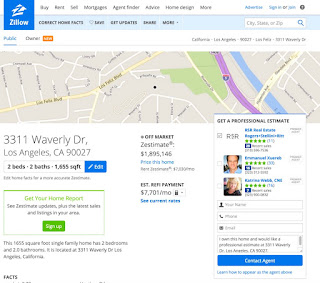 Zillow listing for Waverly Drive house (The address was changed in an effort
to detract from the notoriety of the house.)

I wonder what would be a better deal — buying the house or building an exact replica in Iowa?