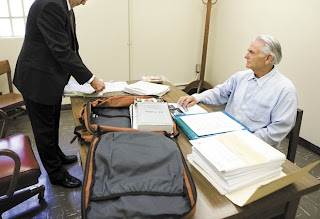 California Gov. Jerry Brown reversed a decision to grant parole to Bruce Davis, a former follower of Charles Manson. "When considered as a whole, I find the evidence ... shows why he currently poses a danger to society if released from prison," the governor wrote.


Brown's office had received a formal recommendation from the state board parole Friday to release Davis, 70, who would have been the first Manson "family" member to secure freedom solely for good behavior.

The Steamer Trunks and The Timeline 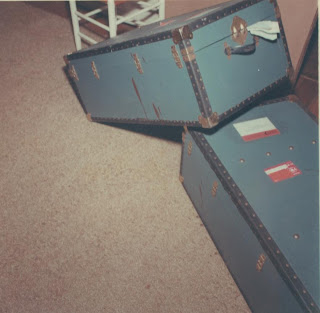 Splotches would indicate a pooling, there were 3 drops of blood on the trunks that dripped in a downward motion indicative of someone (bleeding) standing over them as they were being knocked over or after they were knocked into that position.

Look at the attached photo and take notice of a couple of things:

A) If you had the luxury to reverse a film footage of these being knocked over you would be able to see that they were neatly set (handle side up) against the inside living room wall, in front of a flat brown box, opening clasps facing inward, and out of the way. If you then ran the film forward and knocked into them in a struggle, they would then fall (depending on angle hit and force) in the approximate position they're depicted in, in this photo.

B) The trunk openings are facing toward the wall. The left trunk is still inches from the brown box. The average thinking person would turn the trunks out toward them to search them or move them away from the wall. So, not only are they left in an awkward search position, but again, the close proximity to the flat brown box would indicate they were knocked over from that position and never opened.

C) Notice the right trunk. There are three blood drops on the carpet - two of which are a direct trajectory from the blood spots on the trunk. These three drops are on the carpet at the bottom edge of the trunk which, in my mind, is absolute proof that the trunks were knocked over during the commission of the crimes and never moved or searched. Had these trunks moved even a centimeter after the murders the bloods drop would no longer line up as they do in the photo.

These trunks were heavy, therefore, in my mind, a delivery person had them on a hand dolly cart - handles up - pushed them into the living room, against that inner wall, out of the way, and left them there in that position until Sharon could deal with unpacking them. Even if you went out on a crazy-pants limb to say that the delivery person (and later an entire household) left the trunks in the middle of a major pathway of the house and that they were then knocked over while Jay was being moved to the front porch and in turn left out in the middle of the room, you still couldn't get the blood spots to match as they do. It all makes zero sense.

Sander's book - How does he know it was 2AM when they returned to Spahn? Again, this is all speculation in Bugliosi's prosecution to fit HIS timeline of events, which, quite frankly don't add up. There were no clocks at Spahn. People completely lose all sense of time during stressful periods. How do we know that it wasn't 3AM or 3:30AM when they returned. We don't and neither could any one of the killers because there were no clocks from the time they left Spahn to the time that they returned. It's all speculation!

First, lets look at the drive from Cielo after the murders. Kasabian (and therefore Bugliosi) put forth that the killers changed clothes in the car and then pulled off their first chance to dump the clothing - which was almost at the top of Benedict. Then, they went back down Benedict Canyon to Portola to hose off? And then went back up Benedict, across Mulholland and over Beverly Glen (where they dumped the gun) and then drove down into the Valley. Makes absolutely no sense - except that a TV crew supposedly recreated the actions to find the ravine where the clothes were found.

Still, this  series of events makes absolutely no sense when you're a killer escaping a crime scene - what, you hang around endlessly driving up and down Benedict? No. I would put forth that a more sensical scenario is that all but Watson changed clothes on the drive up Benedict. They then stopped at Portola simply for Watson to change clothes on a side street out of sight. But then saw the  Weber hose and decided to also wash the blood from their hands and face. They then ran into Weber, made a break for it and proceeded up Benedict. How did the news crew find the spot? Because the only ravine on Benedict between Portola and Mulholland would have been where they actually dumped the clothing and where the news crew later found them.

Weber? Hm, you have a retired couple, frightened while awakened in the middle of the night. Again, I think that this was a guestimate of time - lets remember that Weber didn't give his account of the time until months after the murders. If, on the piece of paper Weber had noted the time along with the license tag, I might be less skeptical, but prosecution cases are lost all the time on eyewitness accounts because people aren't always accurate with their memories. And, all prosecutors love to have a timeline that they refuse to deviate from - it lost Marcia Clark the OJ Simpson conviction.

How do we know that during an interview with Bugliosi, again, months after the incident, that Weber didn't say he encountered the group in the "middle of the night" and Bugliosi asked, "Could it have been around 1A?" Yes. "Do you think that's accurate?" Sure, it sounds about right. So Weber's account, after being rehearsed with Bugliosi prior to his testimony - because in Bugliosi's own words, you never ask a witness a question you don't already know the answer to -  went something like:"What time would you estimate that this occurred?" Around 1AM... And, at that moment, history, albeit possibly inaccurate history, is recorded for all time.

Also, let's remember that Bugliosi's entire timeline revolves around a clock radio that was unplugged at 12:15A. Billy G's recollection of events that night is sketchy at best. How do we know that Steven didn't demonstrate the clock for him, unplug it and then stay for another hour? Didn't Billy even say something to the effect that the clocks in the house weren't working so he picked up the phone to call "time" and that's how he knew the phone lines weren't working? So, his estimate of when Steve left his house is very sketchy to me.

Again, I'm not saying that this account is accurate, I'm just saying that I can weave any scenario I want to fit my own needs. If the killers had been sighted on Topanga Canyon at 4AM, I guarantee that Bugliosi could have then taken all the "later time" accounts, brought them in as witnesses and made it work to his favor just as easily.