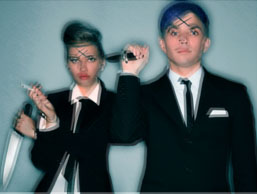 I love your Manson Family blog and I just wanted to share something for possible inclusion.

There is an amazing new NY-based "Charles Manson concept band" that claims to be a new component of the Manson Family.  They seem incredibly well versed in the intricacies of the case (going so far as to assert that they have "the little black book" that Leno LaBianca allegedly possessed, thereby hinting at their support of that theory/motive) and their songs are all centered around the events that transpired.  I personally think it is some sort of postmodern performance art project but I can't speak for them; I suppose it is possible that they genuinely believe as it says on their site that "Charles Manson is Jesus Christ."

You can check out their blog and songs here:  http://thelabiancasband.tumblr.com/
And then there is their first video, in which singer JJ Brine plays Manson and Lena Marquise appears to portray Sharon Tate:  http://www.youtube.com/watch?v=EyhLBzOYwC0

Hope you guys get a kick out of this; I thought it was simply too good to go unnoticed!