Surf’s Up: Terry Melcher’s Nightmare Is Over

I came across this article the other day about Terry Melcher. The first half is about his career, which is interesting in and of itself. In the second half he discusses his connection to Manson.

Surf’s Up! Terry Melcher’s Nightmare Is Over

LOS ANGELES – Terry Melcher, a consistent professional, has participated in scores of hits with artists as diverse as Frankie Laine and the Byrds. Seven Melcher-produced gold albums including Turn, Turn, Turn and The Byrds’ Greatest Hits as well as singles by the Byrds and Paul Revere and the Raiders attest to his talent.

However, it’s not Melcher’s production talent that people think of, but a rumor that isn’t even true: that it was Terry Melcher whom Charles Manson’s accomplices were really looking for the night they killed Sharon Tate and three others in the Bel Air house Melcher had rented to Roman Polanski.

Perhaps the rumor has never been corrected in a public enough manner, but even if it had, it probably would still have survived. Doris Day’s son is too irresistible a magnet for malice. Rich, California-handsome, 31, Melcher often escorted women like Candice Bergen, Tuesday Weld and Michele Phillips before his marriage to Melissa Whittaker three months ago. He seems to generate a bilious jealousy, that he couldn’t have gotten where he is on his own merit.

Melcher has recently completed an album of his own (on which he writes, sings and plays the piano), entitled Terry Melcher. Three years in the making, it was co-produced by ex-Beach Boy Bruce Johnston. In conjunction with the record’s release, he is tentatively beginning to grant interviews. At the home of a friend he spoke of his past work and associations, his current projects, and of things that have been with him privately for years.

At the outset Terry proved to be affable, gregarious, even humorous. He recreated his years as a novice producer and artist with glee, repeating punch lines and doing hilarious impressions of Pat Boone and Wayne Newton. “There were just a few people,” he said, “doing that car and surfing thing: Brian Wilson, Jan and Dean, Gary Usher, Bruce Johnston and myself. We were all working on Sunset Boulevard, all within a block of each other. And our records were...unusually similar!”
While Brian Wilson sang lead or harmony parts on some Jan and Dean discs, Terry and Bruce Johnston did most of the vocal work for Melcher-produced groups like the Rip Chords; the two also had a short string of nonpseudonymous hits as “Bruce and Terry.”

After entering the second phase of his producing career, marked by his reunion with the Byrds on The Ballad of Easy Rider in November 1969, Terry contributed occasional vocal and piano work (usually uncredited) to various projects (including ‘I Trust’ on Byrdmaniax) and also co-wrote songs, especially for the Raiders. “I cut all the Raiders’ tracks with studio musicians when the group itself was out of town. That was fine with Paul Revere. That way he never had to take those guys off the road. He could he out there all year, leaping around in his...tights.”

A similar arrangement for the Byrds’ first album, Mr. Tambourine Man, created bitterness evident to this day. “I had a hard time getting friendly with any of the original Byrds besides Roger [McGiuinn] because none of them had played on that record. It was Roger’s and their manager’s idea. They said from the start, ‘The group isn’t ready.’ Somehow I got the blame.”

Of that period Melcher said, “I worked with the Byrds and got fired because I didn’t get high. Then I worked with the Raiders and got fired because I did. And then I didn’t work! Then I went to court for five years.” (He referred to his lengthy lawsuit to straighten out his late stepfather’s financial affairs, a probate action involving the estate, which Terry managed, and the income from The Doris Day Show.)

It was during this stage in his career that Melcher became peripherally involved in the events that would become maddeningly involved with his name. It started a year before the Tate murders in Bel Air.

“I met Manson in the early fall of 1968 at Dennis Wilson’s house,” he said softly. He sounded like a man relating a grotesque, incomprehensible nightmare. “Dennis thought he was some sort of guru then. Six months later Gregg Jacobsen asked me to come and listen to them play. He said there were three guitars, 30 voices, all raised in peaceful hymns. I went. I listened. I met Manson one other time. That was that.

“My contact with the police began three or four months after all the...murders. I was in the shower and the doorbell rang. I went to the door and there were these two plainclothes cops. I could just tell that’s what they were. ‘Sure,’ I said, ‘you can come in.’ And they asked me, ‘Do you know anybody who would like to kill you?’”

The police told him they had captured the people responsible for the murders in Bel Air, that he should keep it to himself until the news was released and, “’Oh, yeah,’ they said, ‘you might think about getting some guards and guns up here.’

“The cops were coming to my house every single day for about three months. Each time they’d have five or ten new pictures to show me. ‘You ever seen this guy?’ They seemed to be rounding up hundreds of people, anybody with long hair and a beard, it looked like.

“They kept telling me I don’t even know if it was true – ‘Several of the girls are pregnant, and they all say you’re the father.’ One day I got so pissed about that I got out some pictures of girls I’d gone with and I said, ‘Now look, you guys. Why would I want to make it with those...if I’m doing OK over here.’ That made sense to them. They backed off.”

The pressure was unrelenting. Melcher received a letter from an Inyo County court about a couple of rapes and murders in that area, “because it sounded so much like all these other hippie murders down here, and a stranger answering my description had been seen in the area. I don’t even know where Inyo County is. Not even the L.A. D.A. could get them off my back. If I hadn’t had a stamped passport showing I’d been in Europe, I would have had to stand trial.”

Not until nearly a year later did Melcher learn that what he was led to believe was not true; no one had been “looking for him” the night four people died.

“Manson had been trying to get in touch with me to play me some more music. He found out where I lived in Malibu. So he went to my house but I wasn’t home. He took a telescope off the sun deck to show it to my friend Jacobsen so Gregg would give him my number. Manson knew where I lived. He knew I didn’t live in Bel Air.

“Gregg didn’t bother to tell me that until almost a year later. The police didn’t bother to tell me that. For nine months they had me thinking those people got killed because I couldn’t be found. My guilt was monumental. I felt, ‘Why couldn’t it have been me? How much easier it would have been.’
“I guess they wanted to make it into a big New Hollywood/drug/hippie shakedown. It really turned a lot of people against each other. I noticed that a few people became afraid of me. I know I became afraid of everyone else.

“I finally went to a psychiatrist. He said, ‘I don’t know what to tell you. You’re going to be crazy for a while. Try to get through it.”’

After all the fear and gossip Melcher was asked only a few gentle questions the day he took the stand in the Manson case, questions establishing when and where be had first seen the defendants.
“Manson sat there smiling at me through the whole thing. The three girls too. One of them had her skirt up, doing a little leg thing under the table. When I was finished, their lawyer, Kanarek, said something like, ‘We want Mr. Melcher to know that the defendants have never borne him any ill will.’

“And of course...I’ve felt wonderful ever since.

“I’ve seen Dennis a couple of times since then, but he’s never made any comment to me about any of that. The most he’s ever said has been something like: ‘Phew! Weird.’”

The day Melcher testified in the Manson case he went home and wrote ‘Halls Of Justice’, an angry account of his day with echoes of ‘Like a Rolling Stone’ and ‘Positively 4th Street’. He booked time at Wally Heider’s sound studio and cut the tune that night, with Roger McGuinn on lead guitar. “You’ve got a lot of nerve,” he sang bitterly, “to say you are my friends.”

“Everyone seemed to like it a lot, and RCA wanted to buy it. Very badly, in fact. But Roger McGuinn told me I would be capitalizing on a tragedy, and...I let myself be convinced.”
Melcher eventually changed his mind and negotiated an album deal with Warners. In April 1972, a motorcycle accident sent him to the hospital for eight months with two broken legs.

Now the record is finished, and its prospects seem excellent. It boasts a wonderfully voiced Melcher, strong songs and production, a stellar line-up of L.A. sessionmen and Doris Day as a backup vocalist. Since the release of his album and his marriage in February, friends say he has never been more confident, content and full of future plans.
_______
Here’s a picture of the Doris Day beachhouse as it sits today. David Geffen purchased the property and four adjoining parcels to build this compound- everything in the image. Doris’ house is long gone, remodeled into the larger structure to the left. 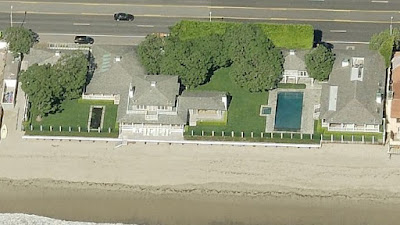 If you want this piece of Manson memorabilia it was up for sale in May for 100 million.