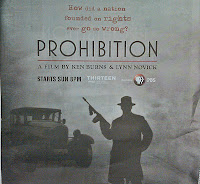 Blogger Cybot asked, "did drug trade start by hippies and then go to the organized crime, or were drugs traded by o. c./mafia from the beginning? - and when did the trade start?" Patty was thinking about his questions the other night while watching the Ken Burns documentary on prohibition. Was that when organized crime started in the US? Of course not.

From the very minute folks got off the Mayflower, they started forming alliances just like they do on Survivor. Even before that, the natives likely did the same. Those who are the most organized, have the most resources, make the best alliances, always win. Those who overstep the boundaries created by the dominant group are marginalized and punished. When one season is over, another rises to take its place. This is the way the world has worked since the very beginning.

We are interested in a very short capsule of time when studying the murders, which might be described as the proverbial "perfect storm." We know that up north, the Brotherhood of Eternal Love (BEL) had deals with the Panthers, with the Gypsy Jokers and also with the Angels (see here). To the south, the mob had been in Hollywood for quite some time, but were not really involved in the trade of psychedelics. If anything, they were supplying cocaine, but not on the scale that they later would. In the summer of 69, there was a market for psychedelics, and there were many competing parties who wished to be the fulfillment arm of the BEL drug empire.

The BEL began as a group of high school students in Anaheim. You will remember that John Griggs, founder of the BEL, hadn't tried LSD until he and his friends dropped acid near Palm Springs. Griggs relieved a "famous producer" of his cache of Sandoz LSD during a Hollywood Hills dinner party in 1966. That experience was the birth of his organization, which he preferred to call a church rather than an organized crime syndicate. 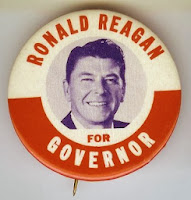 By all reports, Griggs was well intentioned about using LSD to the betterment of humanity. The BEL lobbied to become an official, tax-free religious organization: when it was accomplished, he named California Governor Ronald Reagan as an honorary member!

Anyway, Patty digresses. The point of all off this is that the identity of the producer who had a kick ass, laboratory grade connection and who did not prosecute Griggs may be relevant. Who and what the famous producer actually produced is unknown. Patty has compiled a short list of guesses, as follows:

Bob Evans was very close friends with Roman and Sharon and had produced Rosemary's Baby.  He hosted a large, lavish funeral reception for Sharon. Bob was an infamous partier who, with his brother Charles, was convicted of cocaine trafficking in 1980.

Terry Melcher and Bruce Johnston formed the vocal duet Bruce & Terry in the early '60s. Later, Johnston joined The Beach Boys and Melcher went to work with the Byrds for Columbia Records. There, he produced  "Mr. Tambourine Man" and "Turn! Turn! Turn!" Melcher also performed on Pet Sounds as a background vocalist and was a producer of the Monterrey Pop Festival in 1967.

Chuck Barris, of all people, is a weirdly compelling shortlister. Wait a sec, hear Patty out before you start L'ing YAO. Chuck Barris married Lyn Levy, whose father founded CBS, in 1957. He first became uber-successful during 1965 with his creation of The Dating Game on ABC. He also produced the Canadian-based Bobby Vinton variety show and infamously claims to have worked for the CIA. 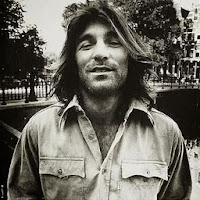 Brian Wilson would be the most expeditious and direct choice for the "famous producer" in question. The Beach Boys were signed to Capitol Records in 1962. They released their groundbreaking single "Good Vibrations" and album Pet Sounds in 1966. According to many sources, brother Dennis was a hub around which many relevant relationships centered. The Neil Young connection is said to have been through Dennis. Bryan Lukashevsky knew Dennis, too. Strangely, Lukashevsky (who now lives in Honolulu) told Brian Davis in March, 2012 that one day soon, the time will be right for the real story to come out. He did not elaborate on why that is. 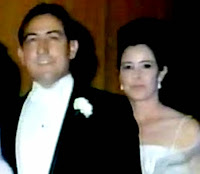 Is it safe to say now that everybody absolutely did know everybody else on the scene in 1969? How to the LaBiancas fit in to all of this?

According to police investigation reports, Leno was part-owner of nine thoroughbred horses. He liked to make large bets at the track, frequented Las Vegas as late as March, 1969 and had misappropriated about $200,000 from his Gateway Markets since 1964. When he met and married Rosemary, she was a waitress at the Los Feliz Inn. At the time of her death, she had two dress shops: one having just been opened on Figueroa Street in LA. This is not a nice area. In fact, it is within yards of noisy Interstate 5 which runs from Mexico, where Rosemary was born, all the way to Canada. 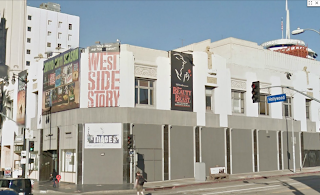 Leno was a board member at the Hollywood National Bank. It is long gone, but it used to sit a block south of Hollywood and Vine at Argyle. Today, this is next to the Pantages Theater and within view of the Capitol Records Building (see left). According to an article at TOTLB, Hollywood National opened to much applomb in 1964 with appearances by celebrities and government officials. Wouldn't you just love to know which ones? Patty sure would. She would also love to see Hollywood National's books, or at least a copy of the local and federal investigations into them. By 1967, Leno's colleagues were being investigated and convicted for laundering "hoodlum money." By 1971, the bank was bought out by United States National Bank of Portland; by 1973, it became a part of Wells Fargo. 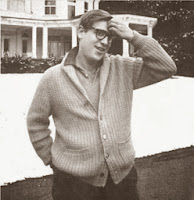 The BEL's ability to produce Orange Sunshine was financed by Billy Hitchcock, a richie rich from the East Coast who rented Millbrook in 1963 so that Tim Leary, et. al. could perform their "research" there in peace. He was a member of the Carnegie Mellon family on his mother's side: "old money" they call it, with ties to huge companies like Gulf Oil, Alcoa, New York Shipbuilding, Westinghouse, Newsweek, U.S. Steel and General Motors.

He had large deposits at The Castle Bank & Trust, an infamous Bahamanian bank founded in the 1960s by a former member of the US Office of Strategic Services and a tax lawyer friend. In 1967, the bank's clients were celebrities, organized crime figures and wealthy business owners like Hitchcock, Credence Clearwater Revival, Tony Curtis, Hugh Hefner, the Pritzker family (Hyatt Hotels), and Las Vegas gangster Moe Dalitz.The Mary Carter Paint Company, one of the the bank's shell companies, later became Resorts International which built a luxury hotel in the Bahamas called Paradise Island. President Richard Nixon stayed there on many occasions. Castle Bank contributed quite a bit of money to his re-election campaign, as discovered by the Ervin Committee in 1972.

In 1968, Hitchcock purchased land just north of one of his homes in Sausalito, then put Nick Sand and Tim Scully on retainer. Shortly thereafter, Hitchcock and Owsley hired a New York law firm called Rabinowitz, Boudin and Standard to look into the possibility of legally producing LSD and hash in the Bahamas. Soon thereafter, the IRS' "Operation Tradewinds" revealed that Castle Bank was involved in tax evasion. It was also covertly funneling funds for CIA military operations including the anti-Castro maneuvers at Andros Island. 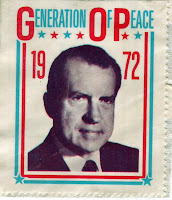 By this time many investors including Billy Hitchcock had moved their funds elsewhere. The IRS planned to initiate a new investigation called Project Haven into the affairs of individual Castle Bank clients like Billy's college chum, Sam Clapp. However, according to the Wall Street Journal, the investigation was dropped because of "pressure from the CIA." Castle Bank collapsed in 1977 leaving poor John Fogerty and many others in the lurch. You can draw your own conclusions about that. In any case, Patty would love to find a connection between Hollywood National and The Castle Bank or any of its shell companies, and she is still looking into it.

Phew...that was a lot. Are you still with Patty? Let's sit on that for a while. She promises the next post will be the last in this series.  Happy New Year, and PEACE.