Dr. David Smith on the Family in the Berkeley Barb

Charles Manson and his "family" were in the Haight half a year after the Death of Hippie.

They left in the Spring of 1968 and moved south close to the scene of the murders with which they are charged.

Rose lived for four months with the Manson family on the "Spahn Movie Ranch," where they spent a year operating a riding stable-- and doing various other things-- after leaving the Haight.

In an exclusive interview with Dr. David E. Smith, founder of the Haight Ashbury Free Clinic, BARB got some insights into the personality of the accused slayers of actress Sharon Tate and four others.

Dr. Smith told BARB Charlie and other members of the "Manson family"-- mostly young girls-- came to the clinic in April and May 1968 for "general medical things, not drug related problems or psychiatric counseling."

But the rare "group marriage" sexual scene the Manson family was into attracted the clinical interest of Dr. Smith and Rose, then administrator of the clinic.

They were concerned with the health problems that crop up in different types of communal living, and the Manson family was one of the few they'd run across the practiced all-out sexual communism.

From that study and their experiences at the Clinic, came a scholarly paper on the group marriage commune to be published this spring in the Journal of Psychedelic Drugs.

And coming as a by-product of their study is a warning to people who dig taking other people's trips: your friendly local guru just might be an incredibly persuasive schizophrenic with destructive paranoid delusions, and not a mystic at all.

BARB interviewed Dr. Smith Wednesday night for clarification of certain points brought out in the study report-- circulated in typescript-- and received permission to use some of the information it contains prior to its publication.

"He, (Charlie) was an extroverted, persuasive individual and served as an absolute ruler of this group marriage commune.  What he approved was approved by the rest of the group.  What he disapproved was forbidden," the report says.

The commune at this time consisted of about 20 core members, 14 of them women, plus several visiting "cousins."  Three had some college education, one even had a masters degree, but education was "indoctrination" to Manson, and one of his chief tasks was to undo the "brainwashing" society had done on his mainly middle-class charges.

Manson "felt that getting rid of sexual inhibitions would free people from most of their other inhibitions and problems," the report said.  "Most of the group had refuted the financial and material possession orientation of their families with relative ease.  The 'sexual orientation' was not that easy."

The researcher reported how Manson went about the process of reorientation:  (Charlie) set himself up as "initiator of new females" into the commune.  He would spend most of their first day making love to them, as he wanted to see if they were just on a "sex trip", or whether they were seriously interested in joining the family.

He would spend a great deal of time talking with them finding out, as he put it, "where their heads were at."  An unwillingness, for example, to engage in mutual oral-genital contact was cause for immediate expulsion, for he felt that this was one of the most important indications as to whether or not the girl would be willing to give up her sexual inhibitions.

The study touches on methods of disciplining family members and prospects who did not shape up.  These included refusal to have sex with anyone who was not changing fast enough, and as a sterner measure, a "long talk" technique.

"This form would involve two or three partners in the commune approaching the individual in question and asking "Why are you here? What do you want from us? If we asked you to hitchhike to New York and stay there for awhile, would you do it?

"If the answer to the last question was yes, and the individual still did not go, he would usually be asked to leave and stay away until he went through sufficient "changes."

People usually left "involuntarily" at the insistence of the family..."

Those that stayed found the struggle for food-- which they termed an "adventure"-- to be one of the main preoccupations of the daily round.  They would rummage through grocery store garbage bins during food forays to town.

Other than that, bread came in the form of contributions from new members or gifts of money, food, and clothing from more affluent "cousins."

The group stayed in condemned ranch buildings in return for managing the stable of riding horses, the ranch's sole source of income.

The group wasn't into eastern religion or drugs, but the simple daily round of work, lovemaking, casual dope-sacramental use of smoking, and scrounging tied in with Manson's thing about children, the report indicated. There were several kids on the commune.

"The child was always the center of attraction and went everywhere the group did.  The child was viewed as the one to emulate and follow as he was considered untainted by society.

(Manson) used the words of Jesus: "he who is like the small child shall reap rewards of heaven,' to  guide their family and child rearing philosophy," the report stated.

Primarily concerned with health issues, the report did not devote extensive attention to the other problems raised by this and similar communal arrangements.  So BARB sought and received a few additional insights from Dr. Smith.

Dr. Smith said, "The problem was that Charlie was disturbed.  He developed a paranoid delusional system that led to violence, it wasn't a drug thing.

"When we studied them there was no violence, but there is a fairly fine line between mysticism and schizophrenia.  Every commune we studied that has survived has had a spiritual leader that has nothing but positive visions this wouldn't happen.

"Charlie had a lot of good things about him, he said a lot of mystical things that appealed to the girls, but he also had a lot of serious problems in the area of paranoid delusions, and everything he said was God's word to the girls.

"If you totally accept someone you lose your ability to discriminate between the good things and the bad things.  If you know schizophrenics, you know how persuasive they can get, and if you are an adolescent in turmoil who is searching for a guru, you can be easily convinced."

Dr. Smith continued:  "This is one of the things that worries us at the clinic.  People can't surrender all individual control to higher authority, they still have to be able to think for themselves."

"...I think there are certain things anyone should be aware of. like what kind of grasp on reality the leader has, how he apprehends reality, but the girls always say 'What is reality'"

"What Charlie did, the main thing, was the sex thing and the infant consciousness.  They put a tremendous emphasis on that, saying the ideal is the infant.  What they are really saying is any socialization is bad and the individual should reject it.

"Then what he did was substitute his own philosophy.

"The crucial thing to look for is how in touch with reality the leader is, and, secondly, whether his vision runs counter to what you intuitively know is destructive.  If people would think in terms of what is constructive and what is destructive behavior, not what is conventional or not...

"So many groups don't develop an individual ethic, just a group ethic, and they aren't much better off than if they stuck with the straight society they are rejecting.  They just go from one group ethic to another group ethic...

"Unfortunately, a very large number of guys like Charlie are running around.  They seem to be attracted to the hip subculture with its freedom and acceptance.  Fortunately, not many of them are as persuasive as Charlie, and they don't end up in positions of power...

"There are a lot of people like that, and many of them are in mental hospitals.  Any individual who has an all-encompassing delusional system that has all the answers is very persuasive to an adolescent who is searching for a substitute father figure."

BARB asked if the girls in Manson's family were any different in any way.

"No, that's the dangerous thing, there are hundreds of thousands of adolescent girls in turmoil that are looking for answers, and if they get hooked up with a guy like that, they are in trouble.  They must analyze their behavior to determine what is constructive and what is destructive.  I'm concerned with the great deal of group conformity that exists in the hip movement," said the 30-year old doctor.  "It's suppose to be the antithesis of conformity."

"I think communes can be a very positive and meaningful way of life but only if the participants in the movement think for themselves," he concluded. 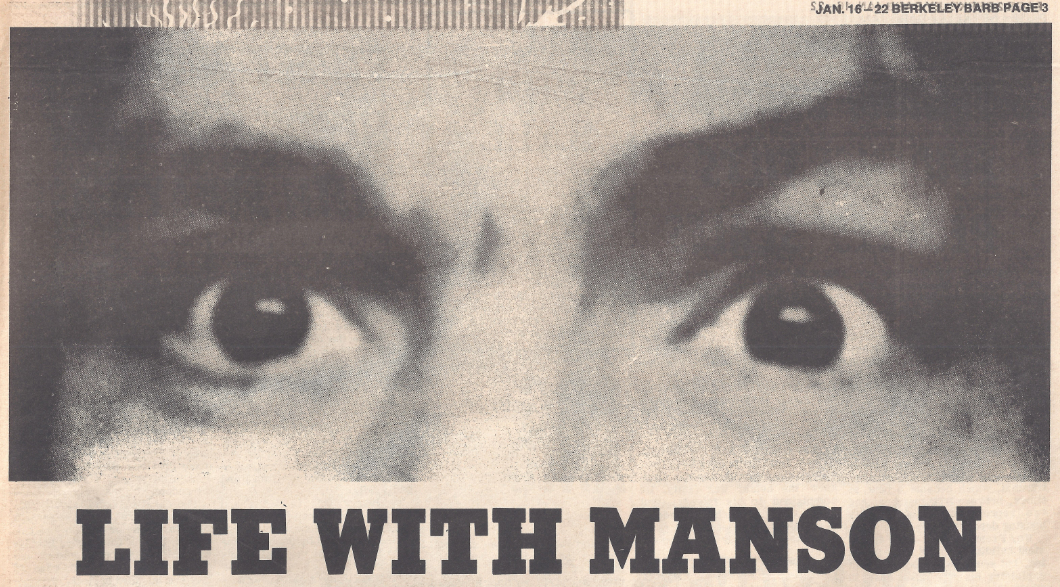