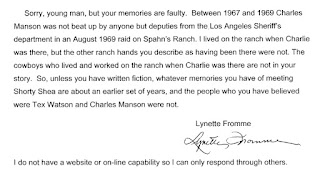 Sorry, young man, but your memories are faulty. Between 1967 and 1969 Charles Manson was not beat up by anyone but deputies from the Los Angeles Sheriff's department in an August 1969 raid on Spahn's Ranch. I lived on the ranch when Charlie was there, but the other ranch hands you describe as having been there were not. The cowboys who lived and worked on the ranch when Charlie was there are not in your story. So, unless you have written fiction, whatever memories you have of meeting Shorty Shea are about an earlier set of years, and the people who you believed were Tex Watson and Charles Manson were not.


I do not have a website or on-line capability so I can only respond through others.

Since it’s likely that Lyn Fromme’s contribution disputing Pete P.’s claim that he saw Charles Manson get roughed up at Spahn’s Ranch on several occasions will generate commentary and controversy I thought I would weigh in with some of my own thoughts before turning it over to the readers of this blog.

First of all I have to say that I have no dog in this cliché, and I wouldn't even have questioned Pete's account had not one of the Admins of this site asked me if I could ask some of the other residents of Spahn's Ranch in 1969 whether they thought his story rang true. As a result of that request two of those persons (one of whom was Lyn) read the account as published here on the MF Blog. I also talked with two other persons ("family members," both of whose names would be instantly recognized by any reader of this blog) who did not read the account; I merely asked them if they remembered a 10-year-old boy who frequented the ranch, arriving and departing by mini-bike, and who hung out with Shorty Shea and was generally known as "the kid." Then I later asked them whether they remembered Manson ever being beaten up at the ranch aside from during the August 16 raid.

All four of the individuals had no recollection either of Pete P.'s presence at the ranch or of any serial CM sluggings. (Actually, it wasn’t that they had no recollections of any beatings; they said that they didn’t happen -- period.) In fact, one of the “secondary” girls corroborated Lyn's version, saying when asked if Manson had ever been beaten at the ranch, "Yes, [the police] definitely beat the crap out of him [during the August 16 raid] while I watched. They held an M-16 to my head as Bear cried. They made sure we watched. Other than that, not that I know." (One could argue that Lyn and the other girl have rehearsed their stories, but they have not seen each other in over forty years, so either they tell the same version because they had it planned out forty years ago, or they tell the same version because it is the truth.)

Pete says he was a witness to four Manson thrashings: two by Monte Laird (one of which Pete arrived late on the scene only to witness the aftermath thereof), one by Joe Soto, and one bear paw slap down of Manson by Shorty Shea himself. I think it's remarkable that one person would witness so many assaults. And if Pete’s recollections are true and he witnessed four assaults during his part-time presence at the ranch over a period of a few months, it figures that there must have been other assaults that he didn't see. In fact, based on the number of the assaults witnessed by Pete alone, I would have to imagine that Manson was getting pounded at least every week and likelier every few days.

Of course we all know that Manson is crazy, but why anyone would remain at a location where they were subjected to serial slappings and humiliations is a mystery. Also odd is the idea that someone who was basically raised in prison (and a small someone at that) would not have developed some kind of survival skills that would have enabled him to avoid violent encounters with larger men. In other words, Manson learned not to be confrontational with bigger guys when he was incarcerated for the simple reason that if he was confrontational he could easily have been beaten or even killed. And isn't it likely that he would apply those same survival lessons to large, hostile individuals he encountered on the outside? Or would he just keep walking up to big guys and pissing them off until he ended up in the dust?

Seeking confirmation of such beatings, I consulted the literature on the subject. And the first place I went to was Ed Sanders' The Family, because I figured that if there was any rumor at all about the activities at Spahn's Ranch that anyone ever thought they heard it was sure to be repeated in Sander's book. But there was nothing there except for one mention of Manson beating up Randy Starr, which is certainly not what we're looking for here. None of the memoirs of Charles Watson, Susan Atkins, or Paul Watkins mention any CM slapfests either. And not only that, there is also no mention of any Manson beatings in any of the parole hearings of the convicted murderers, and significantly not in the hearings of those persons convicted of murdering Shorty Shea, like Bruce Davis and Steve Grogan. At all of these hearings the convicted killers are asked for the reasons for Manson’s homicidal hostility towards Shea, and the allegations of him being a snitch are always brought up. But never once does someone reply, "Oh yeah, and Charlie was tired of Shorty and his friends beating him up all the time."

If Charles Manson was being regularly slapped around at Spahn’s Ranch it would have been a very big topic of conversation amongst his immediate associates who, of course, held him in high esteem. It would have been very big news. And yet none of those associates recalls any such occurrences. Not one.

I looked up the names of the Manson beaters on the Internet. There are references to Joe Soto bloodying Charlie’s nose in front of the Long Horn Saloon, but the references are based on Pete P.’s recollections. Ditto for Monte Laird. I found this extensive interview with Laird where for some reason he doesn’t mention that, incidentally, he twice beat up Charles Manson. Considering that show business is, after all, a publicity driven endeavor, is this likely? What show business person would omit from his resumé the fact that he beat up one of the most notorious mass murderers of all time?

Of course one could posit that the four "family members" I talked to are all lying because they don't want to admit that CM got beaten up a lot.  But why wouldn’t any of the other persons involved in the crimes (most of whom are doing life for murder and have no love lost for Charles Manson and are fond of bringing up every alleged negative facet of his character whilst trying to put the best light on their own) also mention that he was frequently getting the shit slapped out of him (perhaps as yet another reason for that legendary “anti-social hostility” of his?)?

As for Pete P. -- why would he lie? I could speculate on reasons for that, but my speculations would be just that and it wouldn't be appropriate or even meaningful to commit them to writing. But I can say that in my decades-long association with this case I've met many people who have had seemingly detailed fantasy encounters with Charles Manson, with “members of the Family," and even with me.

So that's about as far as I can realistically go with this. I have offered some witness testimony and circumstantial evidence in support of Lynette's recollections. I'd be very interested if someone could find some similar corroboration for Pete P.'s version of events.