"Don't try to play The Man...Because the next time you try it, you'll find yourself hanging from a tree upside down, dead."

If you're Charlie, you say that to firemen. And then the firemen inform the police. The police, natch, send the threat up the ladder to this guy who (to me at least) does not look like he fears hippies, slippies, or any other dang dirty commie.

That's John P. Knox, Chief at LASO Patrol Division West in 1969. Manson Blog researcher and author Deb Silva recently unearthed reports Knox received regarding the scene at Spahn's Movie Ranch, known in the following reports as Spahn Ranch, during the Summer of 1969. The first three pages are missing, but you can read from the fourth page forward by following this link: pdf.
I'll leave the reading to you, it's worth your time, and instead touch on a couple of things that jumped out at me. I'd love to hear what you think below.
- We wondered about this previously but the reason Mr. X, Jack Gordon, Ruth Gordon, and Carol Loveless have mugshot photos included with others arrested in the more famous August 16th raid might be because they were swooped up in the caves near Spahn's prior to the main raid.
You will see in the pdf that the LAPD contacts the LASO the second week of July and is all, "Dudes we're looking for juvie arsonists and robbers. Might they be out there somewhere laying low?"
And the LASO said, "Maybe. They're never super smart about where they hide. I'll get back to you."
TWO HOURS LATER....The LASO people find the bad children. Seriously, how bad do you suck as a criminal if the cops find you in two freakin hours? Get a new career before it's too late oh you juveniles of 1969!
The police at some point also possibly stumble upon Jack, Ruth, Carol, and X while out spelunking. I'd always heard the runaways hid in the caves but maybe an entire alternative society was up there who knows. I've also always believed successful drug dealers live in caves. I bet life was awesome.
In what many would call snitching, Jack spills the beans on some Ranch facts. And also admits to knowing one of the bikers. Those games are dangerous, my dear Jackie Boy.
Moving on:
- Several neighbors admit to being terrorized
- Other neighbors offer to help law enforcement remove the group at Spahn's
- Spahn's son says George Spahn is afraid to leave the Ranch over fear of retaliation
- Law enforcement appears to be playing it straight and by the book in their efforts 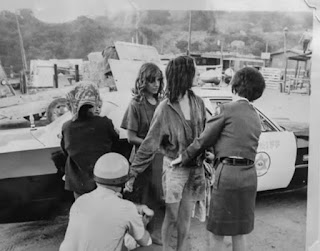 - Laura Ann Sheppard returns to the blog today. Her mother, pictured below with Laura, went to the Ranch searching for her daughter and watched her scamper away. Panicked, she talked to Charlie and got nowhere. 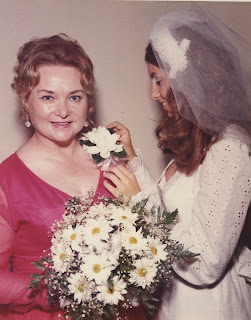 I've seen Laura Ann Sheppard shamed in the comments section of this blog in the past. If any of you rotten assholes are still alive, post up a photo of yourself from back in the day and let's compare. I will wait.
Not all of these kids were throwaways. Some of them met the wrong people at the wrong time.
- The police are told Charlie makes juvenile girls bathe grown men in a big wooden tub. I've never heard that before. Have you?
- The police think Charlie's group is growing booby-trapped weed.
- A group of men at the Ranch are observed having knife throwing practice August 8th, 1969.
- Mrs. Greene & her father confirm groups of "negroes" are in the area.
- A Straight Satans biker bites the nose off a black man in a Venice Beach riot and retribution is feared.
- Dumb Danny uses his wife's maiden surname as an alias. Super Derrrrrr.
-Someone tells the cops Charlie is coming back from SF August 8th with a load of narcotics. The police leave the news at rumor status. Seven people will read what I just wrote, verify it in the report, and decide once and for all the motive is drugs. Who can blame them? The possible becomes the probable in a flash here in Mansonland and it'll always be that way.
Charlie and the Family were likely done before Cielo and Waverley happened. Law enforcement was closing in and the community was sick of their shenanigans. I hate to think it, but Sharon Tate and the others probably would've lived if another week was allowed to pass. It's such a shame. The cops were so close.
Don't do anything illegal. Beware of the Eagle.
Posted by G. Greene-Whyte at 7:21:00 PM 26 comments