Walshin also charged that a close friend of Watson's was ordered away from the Watson home in Copeville Thursday night by an armed lawman. The friend, identified as David Neale of Dallas, "might be helpful to the defense of the case," Walshin said.

Walshin and David DeLoache, whose Los Angeles firm caters to the hippie community, called a press conference at the Fairmont Hotel to air complaints that Boyd, retained by the Watson family, refused to allow him to see the 24-year-old suspect.

Washin said it was "unfortunate that the local authorities in Collin County have so thoroughly and totally suppressed and confined this defendant."

"He is innocent until proven guilty and is entitled to see his attorney unless Collin County has its own rules that in a normal judicial society would be absurd."

Walshin apparently based his right to see Watson on these grounds:

He said he contacted Watson's mother last Wednesday and she told him her son "wanted to see me with regard to his present troubles."

He said he represented both Watson and Neale in a civil matter, and Watson had been in his office "maybe 30 or 40 times."

He charged that Neale, on emergency leave from the Army because of his interest in the case, was invited to the Watson home in Copeville.

"When he arrived at the door he was greeted by an armed sheriff who told him that neither he nor his attorney could come on the premises, and was told to get off the property and not to return—that neither was welcome there," Walshin said.

Neale, a friend of the onetime Farmersville football star for five years, reportedly has information which may be beneficial to Watson.

"The information is quite salient to the present case," the attorney said. He added that if Watson tells him to leave the case, he will return to California.

He said Watson called him 3-4 weeks ago to inform him that he had returned to Texas. Walshin said the suspect did not seem upset.

Watson is being held in McKinney on charges that he participated in the killings of Miss Tate, who was pregnant, and four other persons. Reports form California allege a nomadic hippie cult slaughtered the movie actress and her friends during a symbolistic raid on "the establishment." 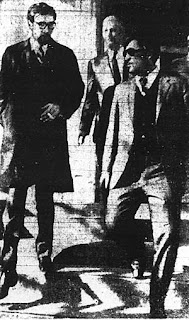 GETTING OUT OF TOWN— Attorneys David DeLoach, left, and Perry Walshin leave
courthouse in McKinney, Tex., after agreeing to return to California rather than serve
contempt sentences.  (AP) Wirephoto

Two Los Angeles attorneys were ordered to jail for 72 hours and fined $100 each by a Texas judge Friday for "making a circus" out of the case of Charles D. Watson, charged in the Sharon Tate and La Bianca murders.

But Judge David H. Brown gave the attorneys, Perry Walshin and David DeLoach, an alternative: "Take the next plane back to California and shut your mouths about this case."

Walshin and DeLoach agreed to leave.

The 24-year-old Watson is being held in the McKinney, Tex. jail on a California murder warrant. He is a member of the nomad cult accused of killing Miss Tate and four others at her Benedict Canyon estate Aug. 9 and grocery store owner Leno La Bianca and his wife, Rosemary, the following night.

Walshin and DeLoach claimed to represent Watson and told a press conference in Dallas last week he was being held incommunicado and that they had been refused a chance to talk to him.

Brown called Friday's hearing in McKinney solely for the purpose of denying that charge and to admonish the two attorneys.

He charged Washin and DeLoach with holding a "press spectacular" for no other purpose "than to enhance your own future by cheap publicity."

He continued: "You have more brazen effrontery than any two so-called lawyers I have seen in my life. Your conduct is not only in contempt of this court but it is in contempt of the entire judicial system of which you are supposed to be a part."

DeLoach, reached later at a Dallas hotel, said he did not understand the contempt charge and maintained that "we understood he (Watson) wanted to see us."

He said he had represented Watson in a civil case in Los Angeles and that "he's been in the office 30 or 40 times."

DeLoach was a Republican candidate for the State Assembly in 1964 and is a former county chairman of the California Young Republicans. He and Walshin are associates in a law firm on Santa Monica Blvd.

Watson, dressed in green work clothes, made his first public appearance since he gave himself up Nov. 30 when he was taken into Brown's courtroom Friday to be asked by the judge:

DeLoach said he did not know "if Watson even saw us in the courtroom."

At least 20 Texas highway patrolmen and sheriff's deputies were on hand to guard the suspect.

Susan Denise Atkins, another member of the band, told the Los Angeles County Grand Jury last week that Watson was the one who killed Miss Tate.

Watson, Miss Atkins, 21, and four others were indicted by the grand jury in the Tate and La Bianca slayings.


This is a link to Walshin's page at the California Bar Association website.  Apparently disbarred in CA possibly due to TX charges against him but able to reapply so the infraction couldn't have been that serious. He has been with the CA Bar off and on.  He is now in OR. contact info given.

DeLoach has been disbarred from the CA Bar Asso., big time!  Can not reapply.  There is contact info for him, too.