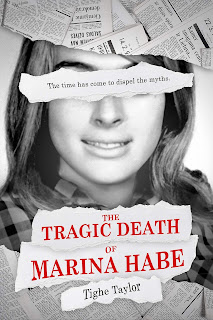 As longtime devotees will know, here and there I've reviewed books associated with our topic - well, because MansonBlog is a wholesome and benevolent institution in part dedicated to helping readers find the books they'll love by spotlighting the best in TLB-related literature - but once or twice I've had to put on my black hat and present a deliciously virulent take-down. Unfortunately, this is one of those moments. This one lies prone on the sacrificial altar, ready for... well... this.

Let's get the knives out.

It's not just that The Tragic Death of Marina Habe is bad. It’s that it's bad in ways that seem to cause the space-time continuum itself to wobble. It gives us 65 pages that have the breadth and emotional resonance of the white pages. I finished it on a short flight, but was retching before we left the tarmac. I trudged on because it was only 65 pages and the lavatory was occupied.

In the introduction, Taylor says:

"Our story is told through the eyes of a fictional writer for a true crime magazine. Much of the action, particularly the early stages, centers around meetings between the writer and his editor. In these meetings, the writer explains his plan for an article about Marina and her fate.

This framing allows alternative theories to be presented...

But.. then he really didn't do much of that. It seemed like he stuck this in while reading his draft (he didn't even do THAT well) to distance himself ever so slightly from this 7th grade level school report done on Sunday night after bedtime and belongs in a folder labeled "Stuff We Already Know". He repeatedly says he made attempts to contact many (including Deidre Lansbury), but no one responded to him. My favorite part was when he said that it is rumored that Maury Terry had drafted a book solving this case before he passed. This is the same Maury Terry who believed David Berkowitz acted in concert with a satanic cult in Yonkers. Terry's family (of course) did not respond to Taylor's requests for information.

It devolves into self-satisfied, fish-in-barrel elimination of suspects (ie The Family) using long-known facts most likely gleaned from the very blogs that Taylor takes time to badmouth. All of the facts contained in the book can easily be found in this here WordPress blog. In fact, this Charmin roll is pretty much a series of glorified, padded-out blog posts... a deeply needless book... a rambling mess of facts already known to even novice TLB students... a collection of self-aggrandizing - seemingly copied/pasted, mildly tweaked facts and (of course) self-published - so he can tell women in airport bars that he writes true-crime books. I would mention the grammatical errors, quadruple quotation marks, misplaced carriage returns and repeated paragraphs, but it's Sunday night after bedtime.

For the love of God, don't read this book, or else he might write another.