In response to all of this bullshit...

The banter about satanism should stop. I understand that he is no longer connected to it. Doesn't matter anyway. The social beliefs connected to eugenics, etc trouble me much more. Does he still believe that the handicapped are a drain on society & should be allowed to die?

I haven't read Shreck's book (and I won't) so I really can't comment on what's in it. But in Styx's video he states his case about a drug motive. His evidence is so ridiculous that it actually supports the fact that it wasn't drug motivated.

They went to Cielo to get drugs because they knew that Jay was getting  $10/20,000 worth of drugs from Joel R? The problem with this theory is that he says it was Jay making the drug deal - so why then didn't they go to Jay's house looking for him?

How did they know to go to Sharon's house to find Jay and his drugs? Or, if set up as a deal, why on earth would Jay set up a major $10/20,000 drug deal at the home of the person that he probably loved most in the world and jeopardize her and her baby's welfare not only that night but every night after if revenge ever became a factor? And if he says because of Woytek, why not do it at the Woodstock house where a known drug dealer had already taken up residence?

Makes absolutely no sense. Only an insane person would use their own house (or a friend's house) to set up a drug deal. And, he will never convince me that Jay would ever set up a drug deal with Watson or anyone else at Sharon's house while she was in residence. Out of the question - Polanski yes, Jay, no.

He comments that Jay & Woytek were stoned out of their gourds - and Abigail too. False. We know that by the autopsy reports.

Jay & Sharon are killed, but they leave Abigail and Woytek alive?? - they're both so stoned that they can't even get out of their restraints - again, the tox screens prove this is false, and, I believe if Woytek was left alive and alone (or with just the women while Watson reported to Manson at the ranch? Really?) in that house he would have escaped.

Manson going to Cielo? I have to agree with Bugliosi on one point, and that it is absolutely preposterous to think that Manson went back to that house after the murders. His whole point of sending others was to not be at the scene of the crime and therefor not indicted. Five people  brutally murdered - by Watson's own admission people running around screaming like chickens with their heads cut off -  gunshots, etc, and Manson's going to return and therefor place himself at the scene? Not knowing the situation after the killers left or if the police were notified? Extremely improbable.

The bottom line here is that Manson never thought in a million years that he would be convicted for these murders - he wasn’t there. What Manson never counted on was California’s law of conspiracy. This was one of the first cases in which someone was not only convicted of first-degree murder by conspiracy, but sentenced to death for that conspiracy.

Manson not allowed to represent himself? Manson was so far off the charts in what he was doing as his own attorney that the bottom line is that if the court had not revoked his right to represent himself this case would have been overturned by the Supreme Court. No conspiracy, just trying to save the tax payers a couple of million dollars. And, in all fairness, the trial judge may have been trying to even save Manson from himself.

Impartial jury? I totally disagree. First, his info on Nixon is incorrect. He says that Nixon made his comment before the jury was selected. They were in fact mid-trial and the judge had the jury voir dire after. The rest equally stupid and not worth thinking about.

14 minutes in he starts on a diatribe of Manson has never actually killed anybody - this of course is inaccurate because he physically participated in Shea and Hinman’s murder - the ear slice with the sword was life-threatening.

Brainwashed followers? No. Helter Skelter as a motive? No, but if you go back and listen to the early tapes the police were making with informants or suspects - before Bugliosi was brought onto the case, they were saying Manson called them "The Family" that he talked about Helter Skelter - or a race war. No one can not deny that Manson was preaching this and I believe that he used it with the women to give them a reason to murder, all along intending for them to take the fall if caught. Like the National Enquirer there is some truth to what Bugliosi pushed on the jury. 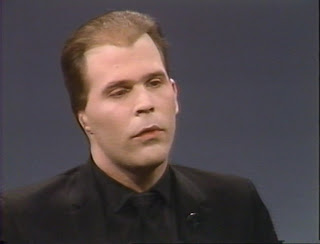 "A meaningful and potent philosophy that people have neglected to see"