Bernard Crowe was called as a witness by the prosecution in the penalty phase of the TLB trial.  The purpose was to show that Charles Manson was capable committing a violent act that could potentially result in the death of another.  In fact Manson did believe that he had killed Crowe at the time he shot him.

Vincent Bugliosi relates in his book Helter Skelter, Part 5 titled "Don't You Know Who You're Crucifying? March 1970" that it was by chance that Manson discovered that he had not actually killed Crowe when the two passed each other in a hallway at either the Hall of Justice or perhaps the LA County jail. 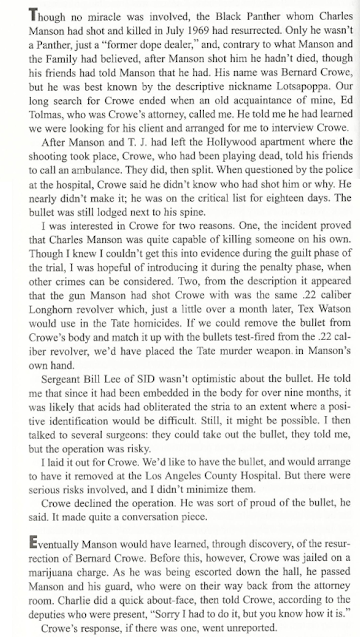 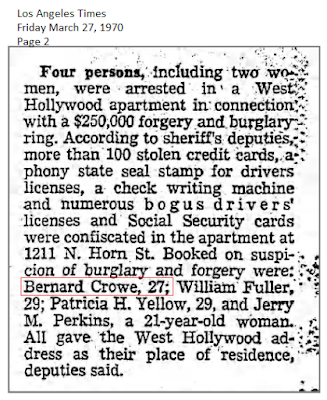 Cielodrive provided me with the trial transcripts of Crowe's testimony.  I wanted to see what, if anything, was said about the burglary and forgery charges against Crowe or if they had any bearing on his testimony in the penalty phase of the trial.  Bugliosi questioned Crowe first and nothing was said about the charges.  When it came time for Irving Kanarak, Manson's attorney, to question Crowe it is apparent that Kanarak knew about the charges but due to his ham handed style of lawyering he was not able to present questions to Crowe about the incident in a manner that satisfied the court or prosecutor Bugliosi.

Kanarak broached the subject by asking Crowe if in May of 1970 or earlier that year if he had been charged with forging the seal of the State of California.  Objections by Bugliosi ensued and counsel was asked to approach the bench so the matter could be discussed out of the jury's hearing. 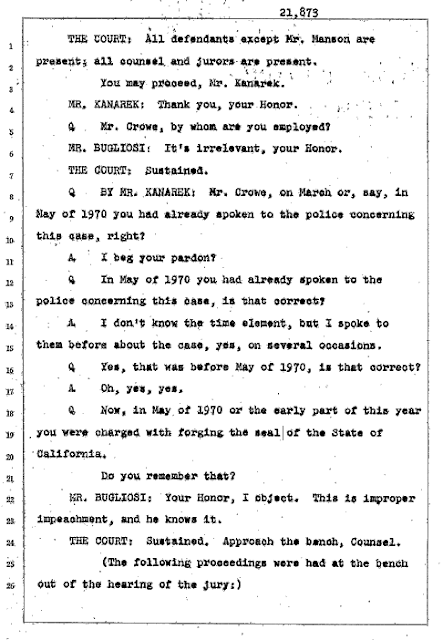 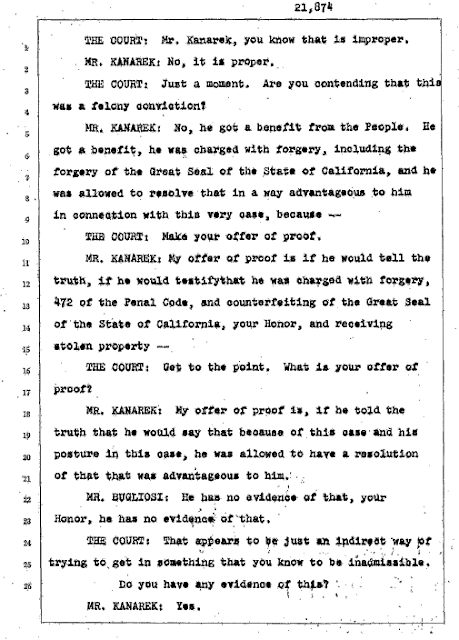 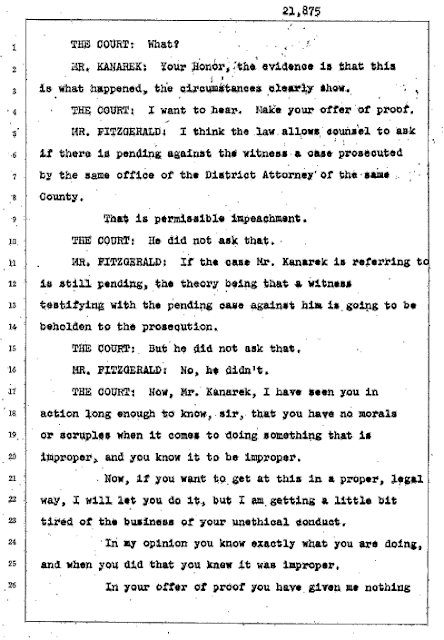 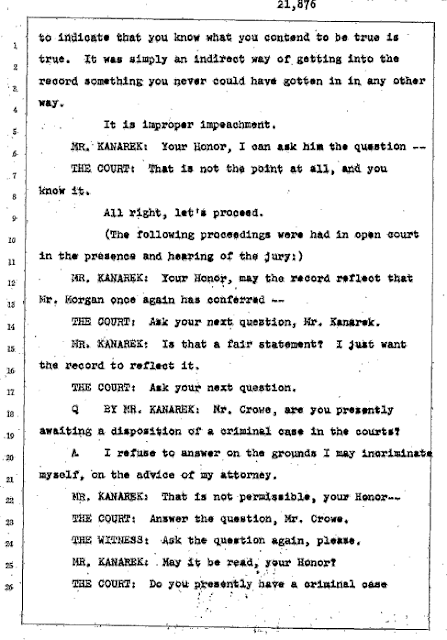 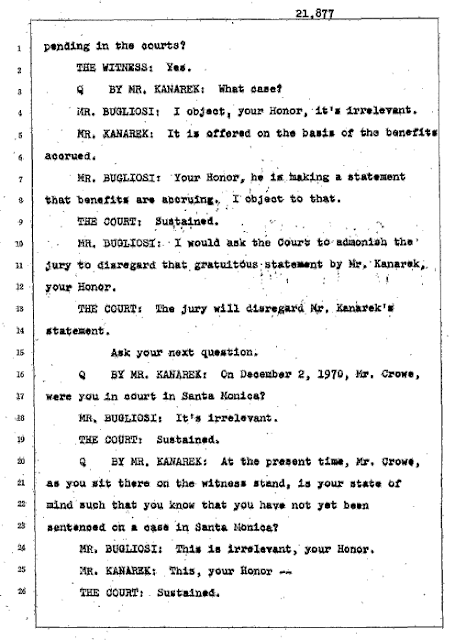 This line of questions and objections goes on for pages.  What Kanarak seemed to be trying to get at was whether or not Crowe was going to be given leniency or perhaps dismissal of the charges pending against him for his testimony.  Bugliosi objected at every turn.  Crowe tried to invoke his fifth amendment rights a few times.  The judge has him answer a time or two but in the end I think the jury is left with the impression Crowe was arrested for something, they know not what except that it might have involved the Great Seal of the State of California, and he may or may not be relieved of those charges for his testimony.

The question for me was why, in his book, did Bugliosi misrepresent the charges that Crowe was facing when he had that chance meeting in the hallway with Manson?  The book came out about three years after all was said and done.  There had been testimony that Crowe was facing criminal charges though the jury never quite knew what those charges were.

I drafted all of the above in this post before this post by Dreath was published.  Comments made in that post had me rethink a couple of things.  Col Scott said that Bryn/Bryan Lukashevsky was present at the Crowe shooting.  I could not find any evidence of that in the court testimony where Crowe named the people who were present.

I looked for and found an LA Times article that recounted the day's testimony to see what was reported.  I noticed that the person named Steve in the court transcripts of Crowe's testimony had quotes around his name in the newspaper article as if that was not his true name.  The person named Del in the transcripts did not have quotes in the newspaper, neither did Rosina or Manson.  However T.J. does have quotes around his name and we know T.J. was Thomas Walleman's nick name.

I contacted Dreath to ask if it was possible the court would allow the use of an alternate name in testimony and he told me it was highly unlikely.  It is done when minors are involved and if there was some legitimate reason to do so for an adult the name used would be "John Doe".

Manson took "Steve's" shirt after shooting Crowe.  I think if "Steve" were Bryn, Manson would have looked like he was wearing a dress if he wore the shirt.  Manson was 5'2" and Lukashevsky was 6'1".

Also, the reporter seems to think that the charges pending against Crowe were drug charges.  The jury likely had that impression, too.

There was no question that Manson shot Crowe, no one denied it, not even Charlie.  The point of Crowe's testifying was to show that Manson was capable of violence that could result in murder.  Why did Bugliosi write something that was definitely not true and in court suppress the true charges that Crowe was facing?

I am completely blown away that the date of the Crowe shooting was misrepresented in court, too.﻿