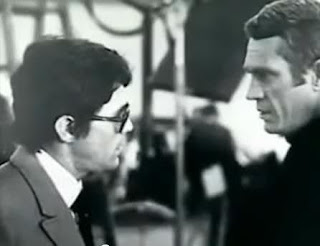 Has anyone noticed I Eviliz has been MIA from the blog for about two months now?  And when I have posted a few new things no one has even welcomed me back???

While at the library the other day I happened to catch out of the corner of my eye a new book titled "Steve McQueen A Biography" by Marc Eliot.  There was a lot of Sebring and Steve's escapades mentioned in the book but I didn't feel like typing that all up since it was really not interesting to me. Even though you are all ingrates I will share with you the M related parts of the book.

Manson mentioned-
When Solar took over the old Republic Studios in Studio City, at the corner of Ventura and Radford to house its 25 full time employees Steve wanted anyone with a good idea to be able to get it read by his people, and he intended to make sure he had enough staff to keep that pledge.

Several employees had no other functions than reading scripts.  One such script came from an aspiring musician who believed he could also write movies.  Someone at Solar read it and returned it with a note that said simply "No interested."  It was one step up from a form rejection letter.  The recipiant was not happy.  His name was Charles Manson.

THIS POST WAS NOT FINISHED BEFORE MATT  PUBLISHED IT.  I WILL HAVE THE SECOND PART MENTIONING THE MURDERS FOR YOU ALL NEXT WEEK.