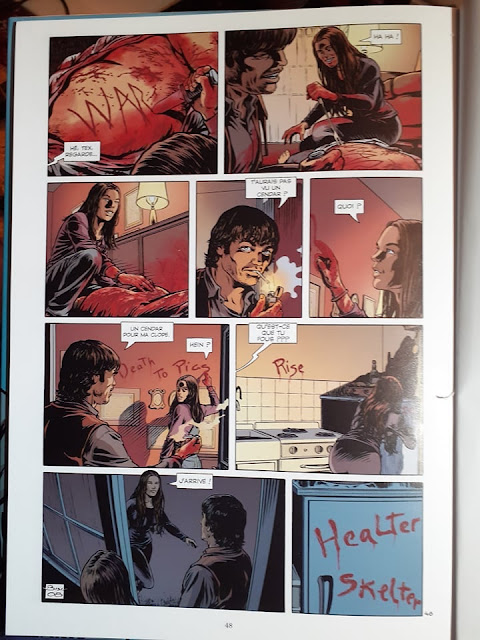 Sometimes a person makes a giant mistake and kills another person. They do their time and live with themselves and their consequences. When they die, maybe they meet their maker.

But not every killer stabs a pregnant woman in her hands while she covers her unborn baby. Or carves WAR into a fellow the following evening. That stuff falls into another category. I don't have a name for the category but something like sickos-who-get-off-on-terrorizing-and-murdering works just fine.

Thanks as always to almighty Cielo  for providing me with new ways to embarrass myself each week. Tex Watson went up for parole again just over ninety days ago. If you search "Inmate Watson" inside of the pdf things go faster. Tex conducts business like an executive on a Zoom meeting and says "uh" every third word.

Charlie turned my brains into noodles but at first I thought it was a game. 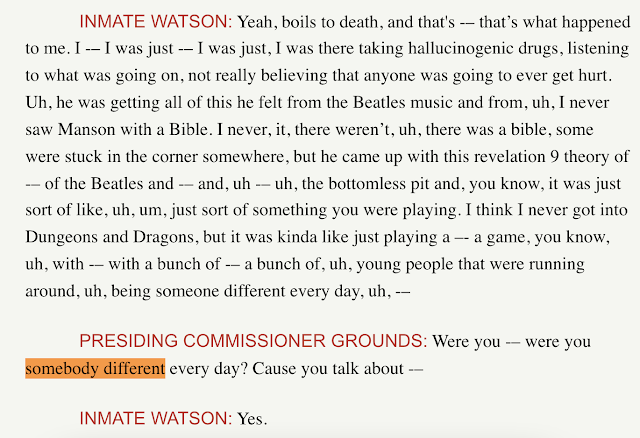 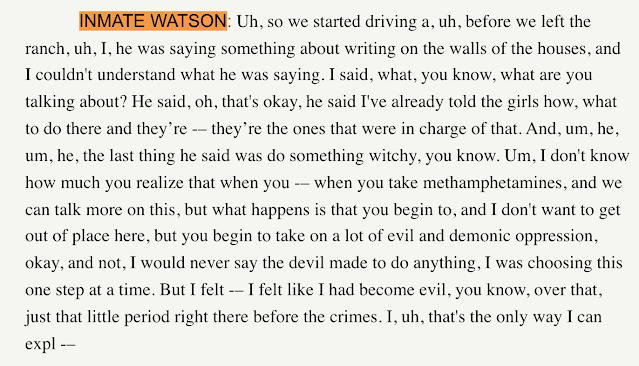 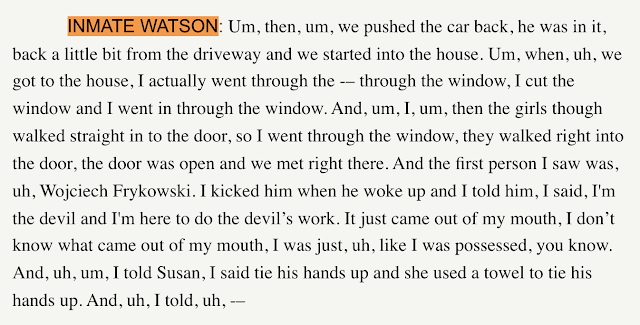 Lightning flashes and just like that, Old Mr. Scratch is back in town. Tex could not sound crazier if he tried. I know he doesn't expect the board to nod like sages and surprise him at the gate with a free Uber but come on.

A white Prius pulls up. Tex dashes past Debra Tate and an angry mob. "Where we goin, pal?"

"The knife store and I ain't got all day."

Linda update. I was unsure if I'd seen this before.

"Yeah, so like the craziest thing happened, Commissioner Gordon. Dennis Wilson was hitchhiking around Los Angeles one day. I stopped and he took me to meet Charlie Manson. What's crazy is Dennis met Charlie after picking up hitchhikers from Charlie's group! I mean what are the odds in a city that big? Oh, and also I was feeling less insecure because the Beach Boys were my friends." 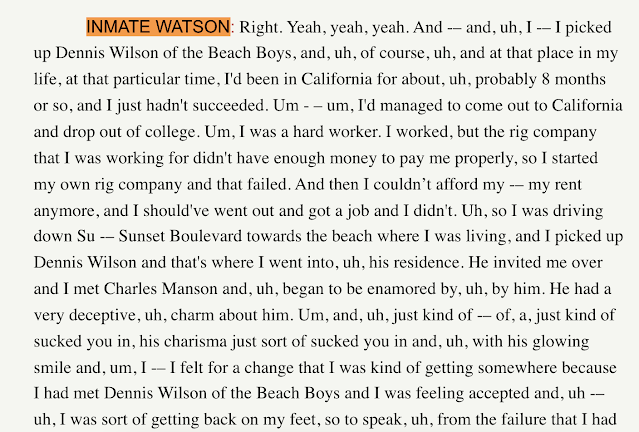 Remorse? Manipulation? I promise I have feeling(s) now? Please never let him out. 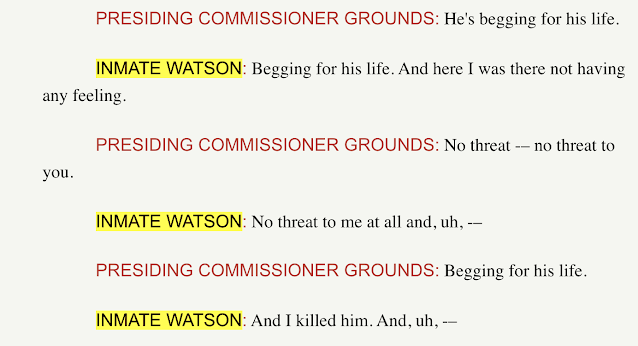 Ever become possessed but then find yourself unpossessed and remember you are out murdering people because a smaller dude said hey go kill for me? Me neither but life is slow here. 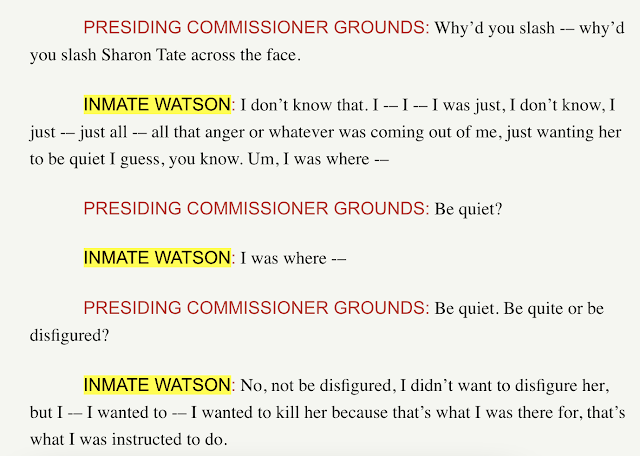 "I'm scared of Karate even when I've got a gun."

I hoped the Commissioner would ask why Abigail's face was slashed but he did not. Maybe next time. The Parole Board sent Tex back to his room when they'd heard enough. Goodbye, we think you're a monster was written between the lines in the official minutes. +ggw 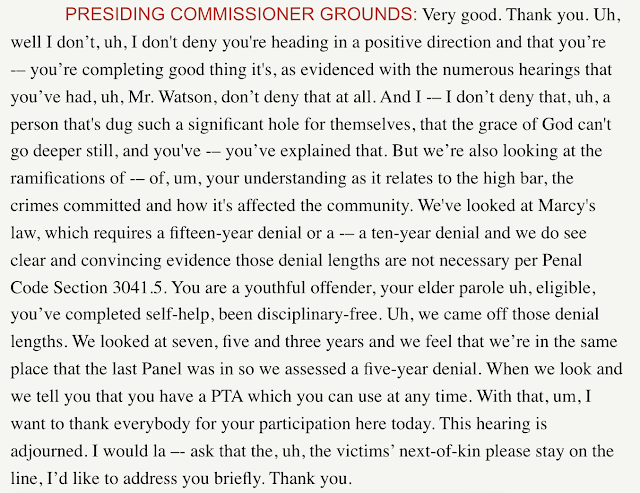 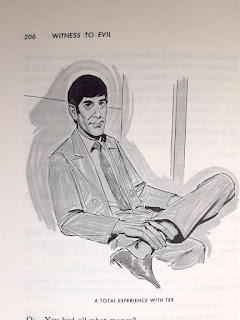 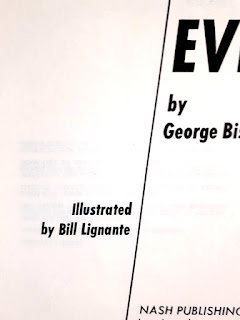 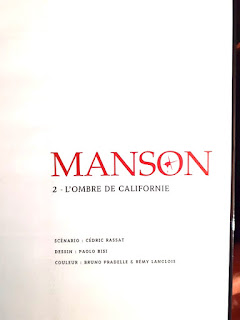 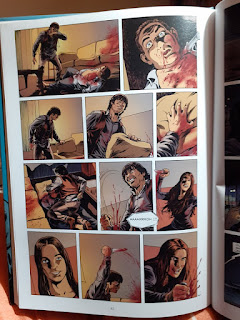