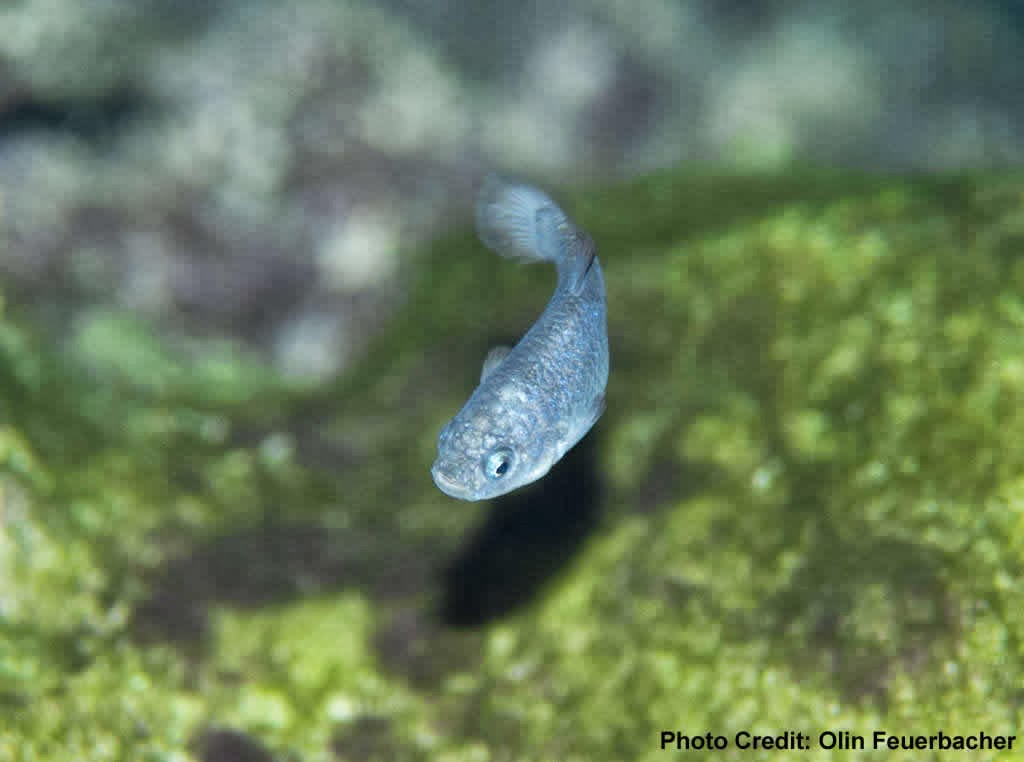 Patty is finishing up her BS this spring and will finally get to wear a black bathrobe and goofy hat on stage. WOOT!  Before that however, there is the matter of a term paper on the evolutionary topic of her choice. Of course, she has chosen the Devil's Hole pupfish.  Do you know much about them? The story goes like this:

The Death Valley pupfishes consist of two groups of 3 distinct species with a total of 7 subspecies, and are an example of "rapid post-Pleistocene allopatric divergence" that occurred between 10-20,000 years ago. It occurred because Lake Manly, which at one time covered most of Death Valley, receded and left just a few isolated patches of water in its wake. Below is a picture of the dry Lake Manly lake bed from Devil's Hole, today. 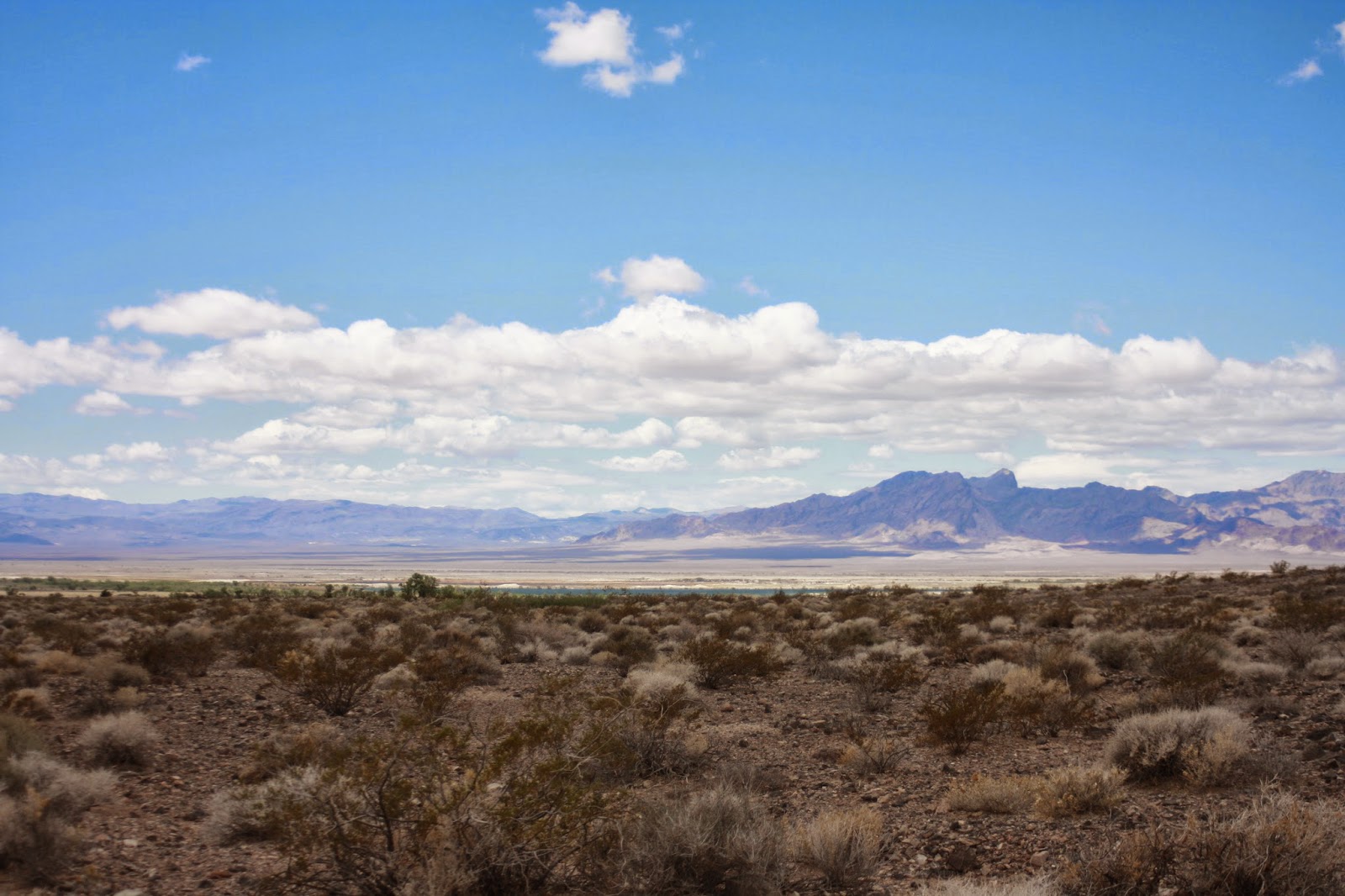 The Cyprinodon diabolis population in Devil's hole may have once been as large as 800 adults. Conservation efforts began in 1969 when the hole may have appeared much shallower to visitors, like Charlie et al. In recent years, the C. diabolis population has varied from 38-95 adults, representing an increase since they became protected in 1976. The last time water levels were as low as they were in 1976 was 6,000 years ago. 1969-76 were the years with the lowest recorded water levels in years, due to explosive anthropogenic growth in Las Vegas. This growth required that more water be withdrawn from the natural aquifer that runs from Salt Lake City to Death Valley. 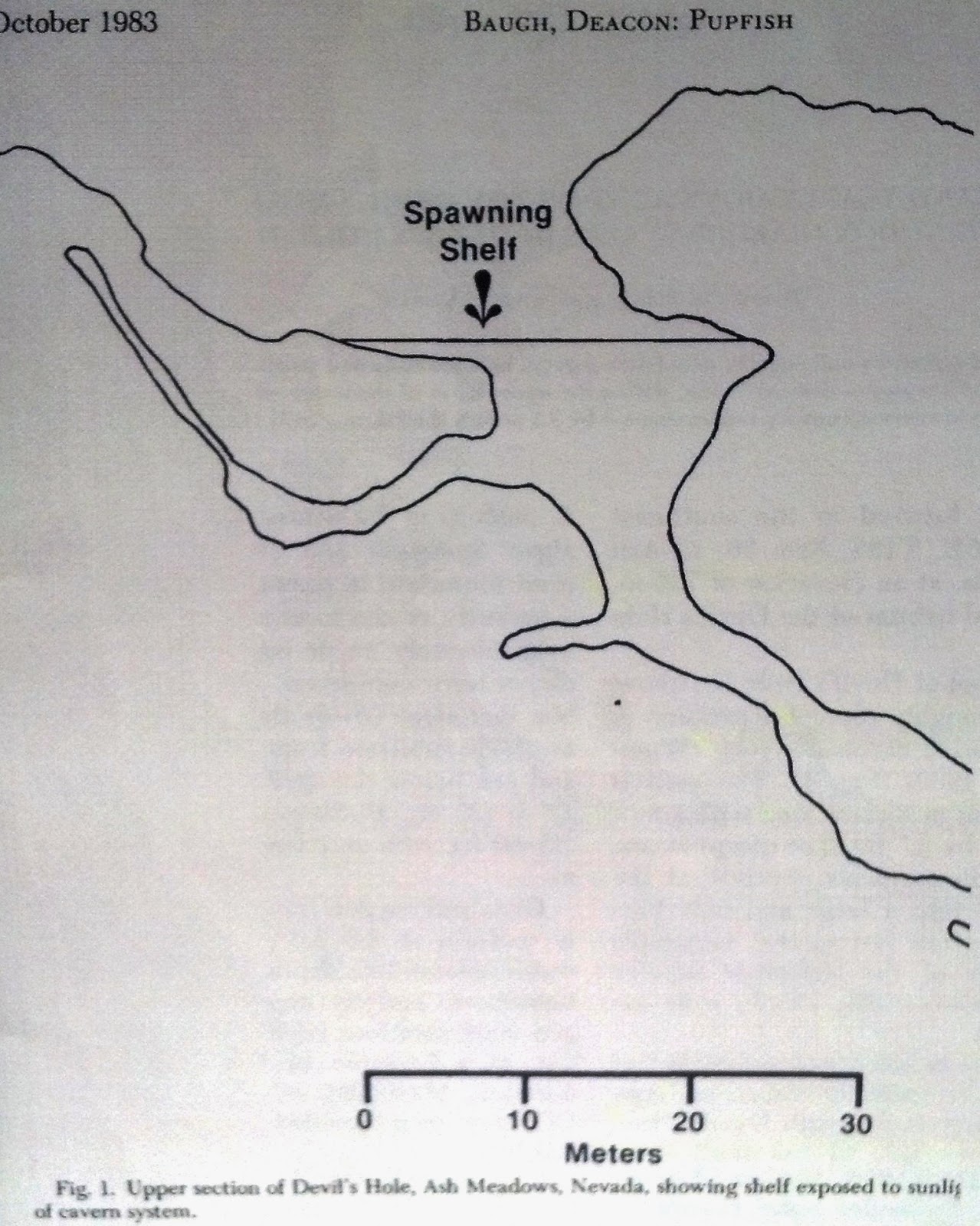 Devil’s Hole is also inhabited by 80 species of algae that provide most of C. diabolis' food. Water in the hole has a consistent temperature of 89.6F, is supersaturated with calcium carbonate and is its own little semi-closed system: i.e., "net autotrophic."  Attempts to raise C. diabolis in captivity have had limited success, though those collected in the springtime seem to be most fertile. At right is a diagram of the shape of the hole underground. It exists because the underground aquifer (aka the Amargosa Flood Plain) is forced upwards there, due to bedrock that was also pushed upwards by plate tectonics millions of years ago. This can clearly be seen in the photograph, below. 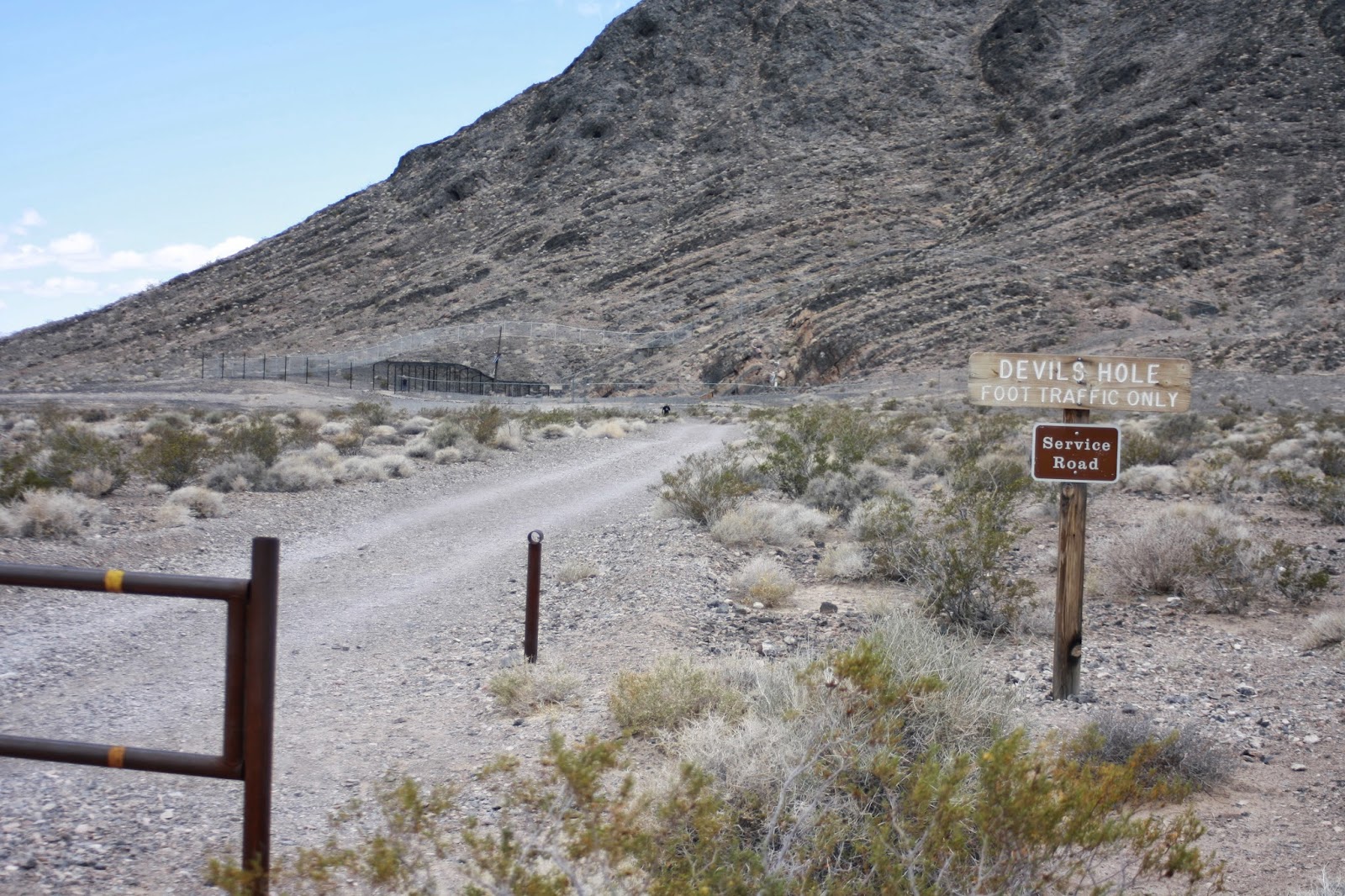 The Family is known to have repeated native stories about fertile subterranean lands inhabited by redheaded giants, and is likely the reason they were so interested in the Devil's Hole. Countless little habitats like this one were probably feasible human residences at some time in the history of the advancing and receding Lake Manly, but Devil's Hole is one of the most well known. Some scholars have written (albeit dubiously) since 1932 that the redheaded giants of native lore were the dessicated mummies of a taller native people from the North who lived and died in these habitats. The mummies' dark hair turns red due to the chemical composition of the caves, much like the hair on the "bog bodies" of Northern Europe (see below). 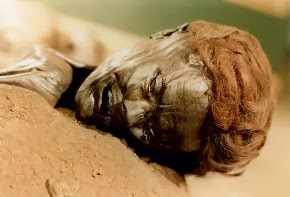 Anyhow, Patty contacted the National Park Service to see if they are having any problems with people trying to climb or throw things over the fence there? She thought that perhaps she could get the word out to Manson oriented tourists to "be cool." Patty is pleased to report that Dr. Wilson who is in charge of the fish's wellbeing reports that indeed, park visitors have been very respectful. Here is what he wrote: 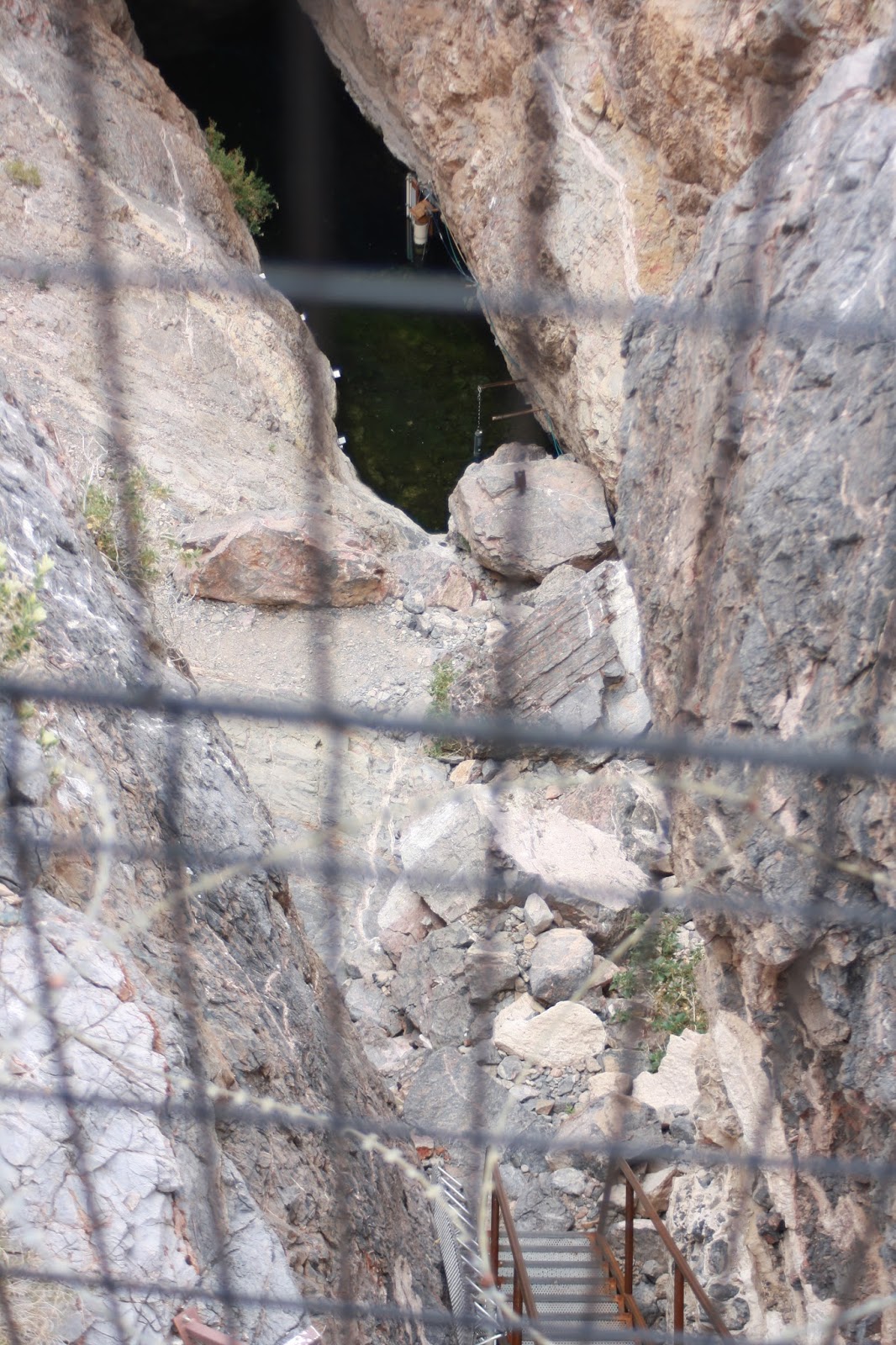 "Thank you for your interest in Devils Hole.  I'm currently the Devils Hole Program manager for Death Valley National Park.  My title is an Aquatic Ecologist.  I have a PhD in Zoology from the University of Toronto and did my masters working on energetics of Devils Hole back in 2000-2001. Program staff have recently upgraded the security system and overall site at Devils Hole.  This has reduced vandalism, but some minor events have occurred.  For example, someone threw broken glass down into Devils Hole from the observation deck. Otherwise it has been quiet over the last several years.If you are ever in the area please contact me and we could arrange a more personal tour of Devils Hole.Regards, Kevin"

The desert. It's fucking amazing. If Patty wasn't planning on being in the area anytime soon, well then, she is now!