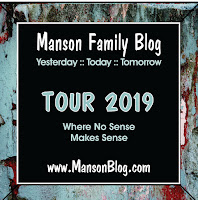 While on the Mansonblog tour this year, I requested that we go by a particular street in West Hollywood.

There is a little street named Horn Avenue that is off Sunset Boulevard.  The street is just two blocks long and intersected by a single street, Shoreham Drive.  While just a short street it does have quite a few residents due to a handful of apartment buildings on the long side of the street.  Between the apartment buildings there are single family residences. 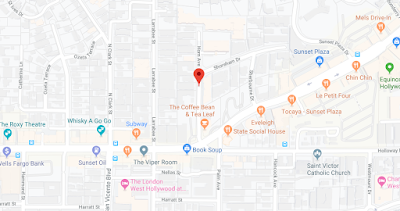 Horn Avenue came to my attention because it’s where Bernard “Lottsapapa” Crowe was arrested for forgery at the end of March 1970.  Crowe, who was arrested with three others, claimed that the apartment at 1211 Horn Avenue was his residence.  However, we know that Crowe actually lived on Woodrow Wilson Drive up in Laurel Canyon. 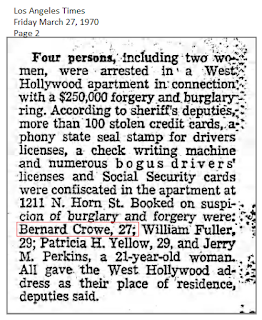 Not long after learning about Crowe’s “other” residence I was reading the first homicide report for the Tate murders.  The report details the movements of Wojiciech Frykowski in the afternoon of the night of the murders.  At about 3 PM Frykowski left the Tate residence and went over to Jay Sebring’s home on Easton Drive.  Apparently, Sebring had asked Frykowski to pick up Suzan Peterson who had been Sebring’s companion the previous night, and Frykowski was to take her to her home.


Turns out that Suzan Peterson lived, according to the report, on Horn Street!

Okay, a second reference to Horn, be it street or avenue.  Horn sometimes had N. in front of it.  This is true of most the streets on the north side of Sunset Blvd. though it doesn't usually show on maps, just on the street signs.

In an endeavor to find Peterson’s exact address on Horn, I looked through several newspaper articles.  I was not able to determine her exact address but I did find that there had been another arrest on Horn not long after Crowe’s arrest.
On June 18 1969 an article in the Van Nuys Valley News reported that law enforcement had made arrests of several people for breaking into travel agencies and stealing blank airline tickets.

According to other articles in the Los Angeles Times the robberies had been taking place for two or three years prior to the arrests but the airlines were reluctant to press charges against those using the stolen tickets, they figured they could eat the loss in favor of good customer relations.  When the airlines found they were suffering more and more losses they decided to report the stolen airline tickets to law enforcement.  Law enforcement had been investigating the robberies for at least six months prior to the arrests.

The initial newspaper article explains the depth of the stolen airline tickets and just how lucrative a business it could be for those who were stealing the tickets. 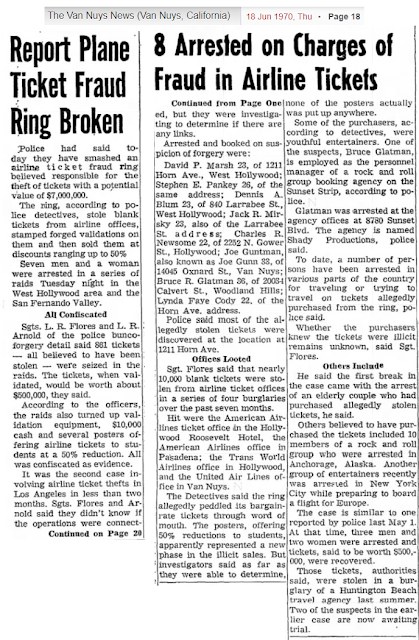 There were three people of those arrested that got my attention because they lived at 1211 Horn Avenue.  They are David P. Marsh, 23; Stephen E. Pankey, 26; Linda Faye Cody,22. That’s very same address that Lottsapapa was using for his forgery business.  Since it was an apartment building it’s more than likely that they lived in different apartments.
Another two people in that group, Dennis A. Blum, 23, and Jack R. Mirsky, 23, lived at 840 Larrabee Street.  This was the same address that Joel Rostau gave when he reported a break-in at his apartment back in March 1969.  Rostau was living a couple of blocks over at 999 Doheny when he was murdered in May 1970. 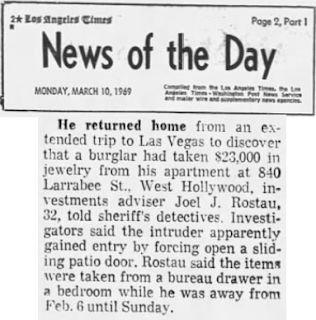 What the heck is going on?  How is it that these two criminal enterprises, Crowe’s forgery business and the stolen airline tickets, which have a rather symbiotic relationship could be operating in the same building at roughly the same time?

Joe Guntman aka Joe Gunn seemed to be the head of this particular gang of eight people.  His own company Shady Productions was located at 8780 Sunset Blvd. which is a block and a half from the intersection of Horn Avenue.

The Los Angeles Times was more forthcoming in naming the entertainers who were busted using the stolen tickets than the Van Nuys Valley News.  Some of those in the entertainment industry were 15 people traveling with Carlos Santana who were arrested in New York on their way to London and Linda Ronstadt and five backup musicians were stopped in San Francisco on their way to Honolulu.  They said their tickets were given to them by their manager, the tickets were stolen in a robbery in Hollywood on April 27, 1970.
The weekend prior to the arrests of the gang, Eric Burden and War were stopped at the Anchorage Alaska airport with tickets that were stolen in the Los Angeles area.

A 1972 newspaper article told of a group of people who were arrested back east for stealing and selling airline tickets.  In this article the FBI and Interpol joined forces for the arrests because “underworld figures” were using the tickets to smuggle drugs and to unload “millions of dollars in stolen securities throughout Europe.” 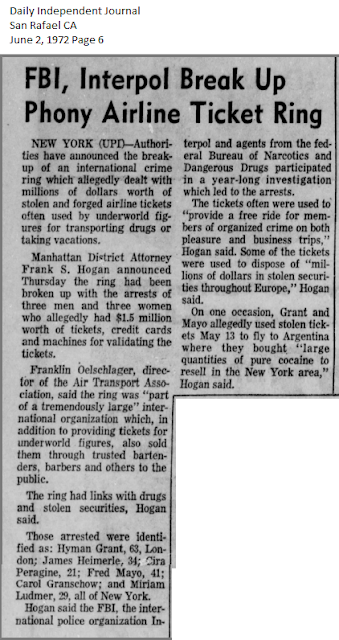 It’s not a stretch to consider that Joel Rostau may have been using stolen tickets when going abroad while he was unloading securities Europe, stolen from the U.S. mail at airports.  If one were to purchase a fake driver’s license and social security card from “Lottsapapa” and his crew it would be a simple thing, back in those days, to get a passport in an assumed name and to conduct business under the radar.  Grab yourself some cut-rate airline tickets and you’re good to go!

While on tour, Dreath and I endeavored to locate reverse street directories for West Hollywood so we could find out exactly in what apartment each of those arrested resided and when. Also, to find out what was the address where Suzan Peterson lived on Horn Avenue.  We went to the West Hollywood Library only to find that there was no such animal for the years we required that included Horn Avenue.  The adult services librarian, David Davis, did his best to help us going as far as phoning other library branches to see if they had the information we sought and even sent a follow up email after we returned home.
So, if all that isn’t enough, I also learned that there is a connection to Horn Avenue with Dianne Linkletter, who committed suicide October 4 1969 by jumping out her sixth-floor kitchen window to her death.  Dianne lived at 8787 Shoreham Drive.  Remember I said earlier that the only street to intersect Horn Avenue was Shoreham Drive.  The location of Dianne’s apartment in that building was across the street from 1211 Horn Avenue.

Dianne had apparently called her friend Edward Durston to come to her apartment in the middle of the night because she wanted to talk.  Durston arrived at the apartment about 3 AM.  Durston did not have far to go because he lived at 1211 Horn Avenue.  Though Ed Durston was not considered a suspect in Linkletter's death, his presence at the accidental 1985 death of Carol Wayne, in Mexico, raised some eyebrows.  Wayne was a television and film actress who made numerous appearances on the Johnny Carson Show as Art Fern's Tea Time Movie lady.

Later newspaper articles said that Linkletter was a friend of Abigail Folger and probably knew Sharon Tate.  The article went on to say that Durston was a “speaking acquaintance” of Voityck Frokowski.

Four days after Dianne Linkletter’s suicide another woman committed suicide, this time by overdose.  She had told her husband that she was despondent over the Linkletter suicide.  The woman, Toni Monti, lived at 1211 Horn Avenue. 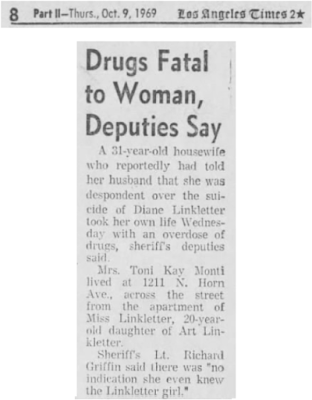 If there ever was a place for paranormal activity in West Hollywood, I think it would be on Horn Avenue.

All of this led me to conclude that if “Lottsapapa” had any connection, no matter how small, to the Tate/LaBianca saga, that connection would lie with the victims and not the Manson Family.  "Lottsapapa" sure as heck didn't have anything to do with the Family after he was shot by Manson.  Frykowsky had been to Horn Avenue on the day of his death.  Sebring most likely was familiar with Horn Avenue because of Suzan Peterson.

I was never able to reach that ah-ha moment with all of this information but if you can come up with something, I'm all ears.