Bus Exodus Made Stops For Murder 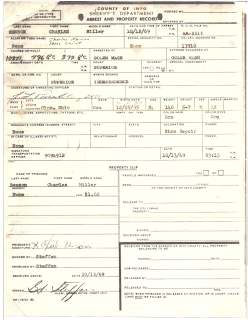 INDEPENDENCE (Inyo County) — The trip began in a bus. It ended in a bus. On the way eight people — and possibly 11 — were murdered.

From there, 26 members of the Manson "family" were brought under arrest to Independence, a small town in the shadow of the Sierra Nevada.

Sheriff's officers here thought the hippie band was guilty of car theft. And, noting that even the women among them wore sheath knives, possibly worse, they put out the names of the 26 in inter-city teletypes.

When detectives from Los Angeles arrived to question members of the family, and took nine of them away, local officers found out why they were wanted.

The officers heard the name "Tate." They saw the penal code section for which they were wanted: 187. Murder.

Manson, 34, who has a five-page criminal record, including assault with a deadly weapon, theft, arson and car theft, is in the Inyo County jail here. No charges have been filed against him in the Tate case.
But authorities say he was the ringleader of the band of wanderers whose members included at least a half-dozen who specialized in murder. Investigators said followers sometimes spoke of him as "Jesus."

In a dimly lit Independence motel room, where paint peeled off the ceiling over the bed where an infant sucked a pacifier, two of the young women who deserted comfortable, middle-class homes to follow Manson described him Monday night:

"He was magnetic," said Sandra Good Pugh, 26. "His motions were like magic, it seemed like. The first time I saw him he was petting a cat. I don't know why that struck me, but he seemed so kind."

"He gave off a lot of magic," said Lynn Fromme, 21. "Everyone was always so happy around him. But he was a sort of changeling. He seemed to change every time I saw him. He seemed ageless..."

Manson is a short man, with brown hair and eyes, who is a musician, the women said.

"The first time I heard him sing," said Mrs. Pugh, "it was like an angel. He wrote songs. Made them up as he went along. Some were beautiful, happy songs. Others would be sad and moving."

The Manson family started from the Haight-Ashbury in San Francisco on April 12, 1968, in an old school bus converted into living quarters for 14 young men and women.

Mrs. Pugh and Miss Fromme weren't with him, then. The family's membership shifted slightly almost daily, as some left, others joined. On the way south from San Francisco the newest member arrived: a baby born in the bus "somewhere along the line."

They were financing their trip on a credit card brought with her by Patricia Krenwinkel when she defected from the middle class one day in September 1967. She had apparently met Manson, and had left town with him immediately.

It was at an abandoned movie ranch near Los Angeles, where the hippies had established a commune last August, that Mrs. Pugh and Miss Fromme joined the family. There, police say, they converted stolen Volkswagens into dune buggies.

Then Manson moved again. It was a different bus, but a similar exodus; everyone climbed aboard. They moved quickly.

This time it was to Death Valley.

Investigators said the men again opened a Volkswagen theft ring. It was for this — and chasing miners off with knives — that National Park Service rangers, California Highway Patrolmen and sheriff's officers arrested the 26 members of the family.

The two young women said that they noticed the men leaving on "four-day hikes on the desert." But, they said, they knew of no car thievery or murder.

After the mass arrest, they were taken into custody by Los Angeles detectives, questioned and released. Mrs. Pugh was charged by authorities here with possession of a stolen pistol, and the girls are waiting at Independence for her court date there Dec. 15.