It's been a long time coming but it appears Anthony DiMaria's project has found a studio to distribute his film.  Many people have been looking forward to something on film about Jay and his life.  And it's something we will get to see later this year! 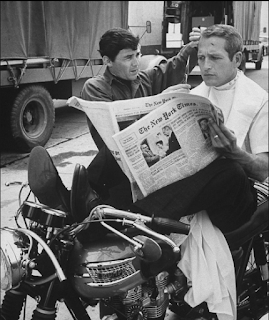 Sebring is mostly remembered as a faceless victim of the grisly Charles Manson cult murders of Roman Polanski's pregnant wife, Sharon Tate, and three others at the director's Benedict Canyon residence in August 1969. But the film by DiMaria, Sebring's nephew, chronicles the late haircutter's rise as a Hollywood celebrity who styled the hair of Frank Sinatra, Steve McQueen, Paul Newman, Marlon Brando, The Rat Pack and Elvis Presley, among other stars.

Jay Sebring....Cutting to the Truth, co-produced by Noor Ahmed, DiMaria and Johnny Bishop and executive produced by Chad Layne and Voss Boreta, will screen at film festivals this spring before a commercial release on streaming, digital and other major platforms later in 2020.

"This is an intimate, fascinating portrait of a man whose legacy is so much more than how he died. It’s how he lived that is the main subject here, and his profound contribution to an entire industry, as well as to the style of the 1960s, is expertly — and finally — celebrated,” Jordan Fields, vp acquisitions at Shout! Studios said in a statement.

The distribution deal was unveiled by Shout! Factory’s founders and CEOs, Bob Emmer and Garson Foos, DiMaria and Fields, who negotiated the pact with Ahmed on behalf of the filmmakers.
Posted by DebS at 6:30:00 PM 21 comments