Stolen Checks and the Enigma that is Bill Vance

Among the newly surfaced images and documents is a property report for items confiscated during the Barker Ranch Raids.

This property report essentially transfers items collected in the raids from Inyo County to Los Angeles County to be investigated and used in future trials.  The transfer was made February 18 1970. 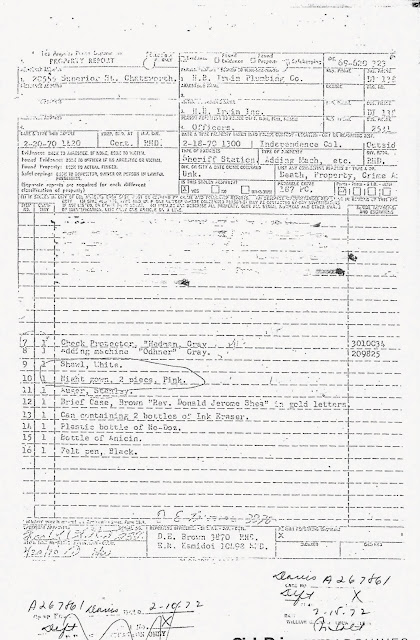 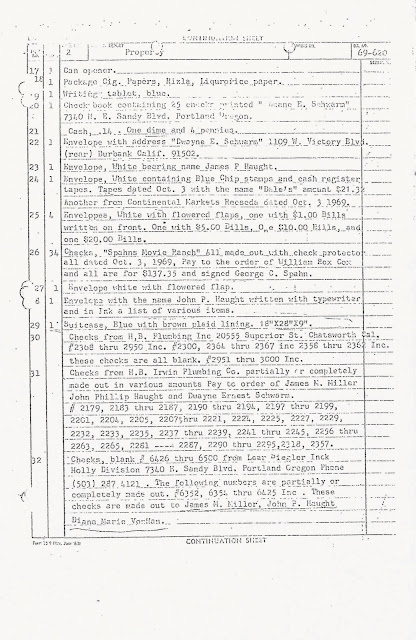 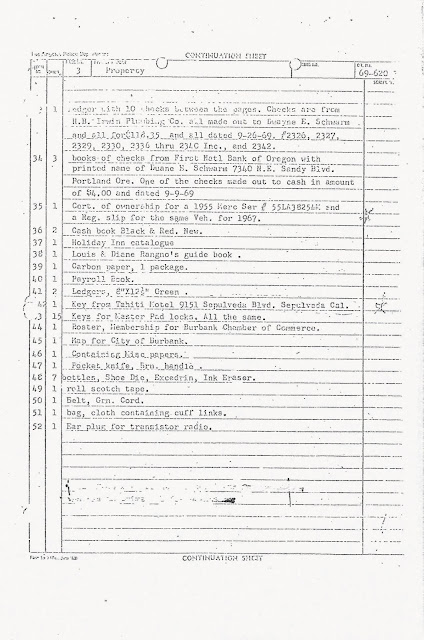 Listed among the items are numerous checks, some blank and some made out to specific people.  A Hedman Check Protector is the first item listed.  There are also office supply type items, OTC drugs, receipts, envelopes which are possibly addressed to certain people and the attache case where Shorty stored his guns.  Going down to item 29 on the second page of the report, a suitcase is listed. 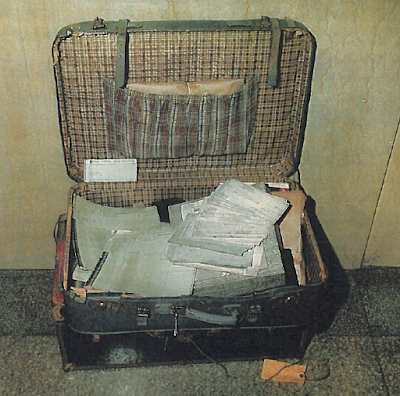 Another slug of checks came from Oregon.  Some of them were from Lear Siegler Inc. Holly Division 7340 NE Sandy Blvd. in Portland.  Those, too, were completely or partially made out to James M Miller, John Phillip Haught and Diane Marie Von Ahn.  More checkbooks were found printed with the name Duane E Schwarm at the Sandy Blvd. address. 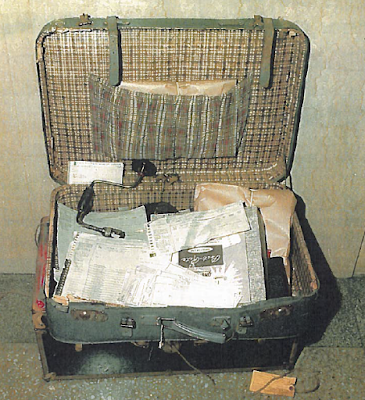 Duane Ernest Schwarm was a real person who, as near as I can tell, lived and worked for majority of his life in Oregon.  He married in Oregon four times, 1953, 1969, 1976 and 1982, and died in 2010.  He was born in Chicago IL Dec. 1 1933 and his first name was spelled Dwayne on his birth record but all subsequent records spell his first name as Duane with the same birth date.  There is no indication that he had any relationship to the Family.

Diane Marie Von Ahn was a Family member, she used an alias of Mary Ann Schwarm and she was from Gresham OR.  She died in a motorcycle accident in Oregon June 30 1972.  Her death record is in the name Diana Vonahn.  Her mug shot is #49 here.

What we do not know is how many checks Family members may have cashed before they were arrested.  It's probably a safe bet to believe that forged checks were cashed, Nancy Pitman took off with Bruce Davis because she was facing bad check charges.  The Missouri articles about William Rex Cole and his "flock" stated that Claudia Leigh Smith aka Linda Baldwin was wanted on some kind of check charges.  There may be more of those types of charges that we never knew about because stolen and forged checks pale in comparison to the murders.

On to the enigma of Bill Vance. Nothing has been solved but more information has come to light.

Generally when people take aliases they use a name of a real person.

The oldest one was in the name of William Joseph Vance.  It was issued November 2 1965 and gives his address as Spahn Movie and TV Ranch on Susana Pass Rd.  Chatsworth.  On the application for the license Vance said he had a previous license in Tennessee and that it was lost.  It appears the license expired in 1968. 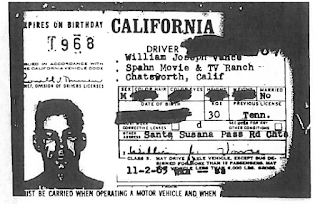 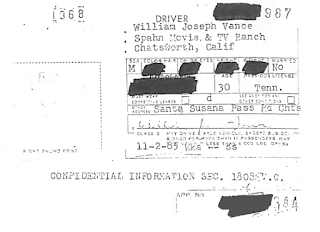 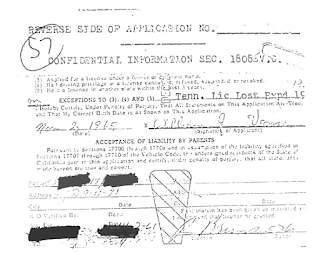 The next license was in the name William Rex Cole.  It was issued September 8 1969 and gives an address of Spahn Movie Ranch Chatsworth.  The application claims that his previous license was issued in Texas and it was lost. 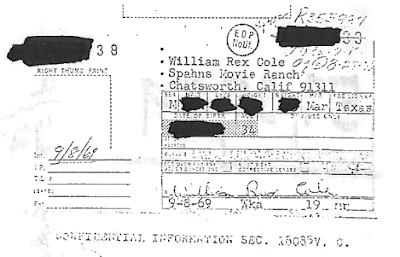 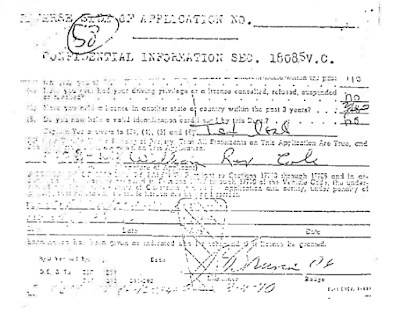 The third license was in the name of Dwayne Ernest Schwarm, it was issued September 19 1969, just 11 days after the William Rex Cole license was issued,  This time there is an address in Reseda CA given as his residence.  The house number and street are redacted.  The application states that his previous license was issued in Oregon and, you guessed right, it was lost. 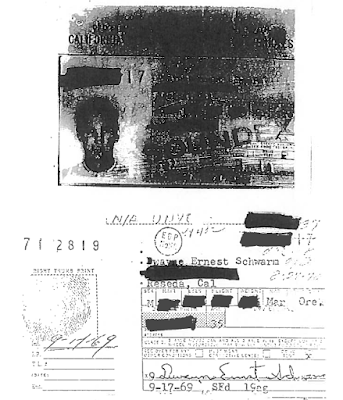 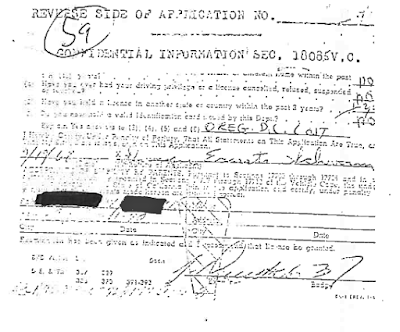 What is interesting is that the Schwarm license uses Schwarm's legal first name though the checks are printed with the first name as Duane according to the report.

A little bit of research was done on the other two names.

There were five William Joseph Vance's but one stood out to me.  When doing research on Windy Bucklee, true name Lee Saunooke, I found an obit for her step-father.  His survivors listed Lee as well as his wife Theressa Vance Longano.  The Vance name jumped out and I learned it was her maiden name.  Searching Theressa's family tree I found that she had a brother named William Joseph Vance. 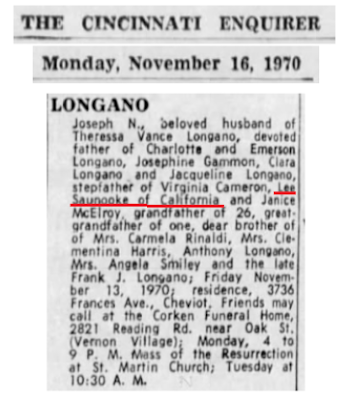 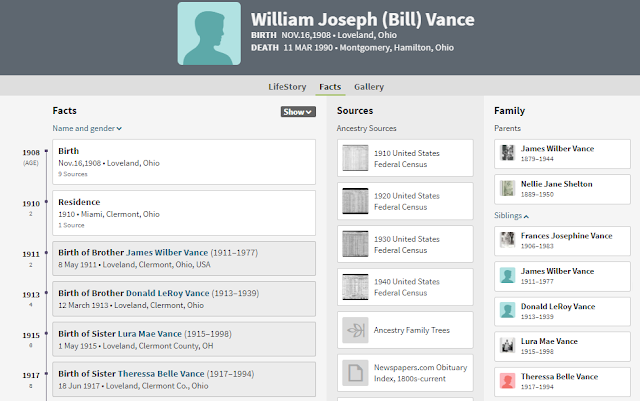 Is it possible that Windy Bucklee supplied Bill Vance with the name of her uncle?  According to his driver's license he was at Spahn Ranch in 1965 and so was Windy.  Does Windy know Bill's true name?

Circling back to the stolen checks, if John Haught was indeed murdered, did it have something to do with the stolen checks?  Could he have expressed a desire to come clean to the authorities about the checks and, like the later murder of James Willett, was he  killed for saying he was thinking about it?

And, I think now we know the answer to an often asked question, "Where did the Family get their money?"  Steal, forge and cash checks.