A Prison Psychologist on Charlie Manson

It began like this: a correction officer brought him into my 4x6 office on the cell block.  His feet were in shackles, but his hands were free.  The officer asked me if I wanted his hands shackled, and I said no, knowing that he had no history of violence while in the institution.  The correctional officer left, closing the door behind him.  I sat at my desk.  I made a simple greeting, suggesting he sit, but he didn't comply or say anything.

Charlie shuffled over to a small bookcase.  He ran his finger along the books, touched knick-knacks on the shelf, and looked at paintings on the wall.  Slowly turning towards me (he offered no initial eye contact), he placed his hands squarely on my desk, leaning forward, his face in close proximity to my face.  Then with direct eye contact, he said slowly with emphasis, "I don't see any pictures of your children here."

Looking him squarely in the eye, I said, "Shut the **** up and sit down."  Smiling slightly, his demeanor abruptly lightened, he sat.  Unfortunately, I do not recall what he said during the remainder of our encounter; however, there was some degree of engagement that had none of the threat suggested in his initial presentation.  His ploy had failed, and he knew it.

I met Charles Manson in 1982, while working in my first post-doctoral experience as a forensic psychologist at the California Medical Facility in Vacaville.  This is the place where the California Department of Corrections and Rehabilitation sends felons who are mentally ill and need a high level of care.  Charlie was deemed one of those felons, spending his first ten years of his incarceration in solitary confinement at San Quentin.  He had recently been relocated to Vacaville, which was something of an experiment to get him out of solitary confinement.  The goal was to get him on the "mainline," where he could mingle with the general population, those who were not so severely disturbed that they needed 24-7 lockdown and close surveillance.  As a postscript, the experiment never worked very well because there was always someone in the prison looking to make a name for himself by "lighting him up" - a reference to a hobby shop incident where someone threw lighter fluid on Charlie!

Every year, according to the law, Charlie would go before the parole board.  Before each meeting with the board, his psychiatric file had to be updated.  That year, the psychiatrist who had previously handled Charlie's update asked me to do the interview and write-up.  She admitted she had been "undone" by some of her previous encounters with him and did not wish to see him again.  As a new postgrad and newest member of the team, I took it as a compliment and said, "absolutely," curiosity driving my eagerness.  I getting into a bit of trouble and into an argument with a haughty consulting psychiatrist from San Francisco who insisted Charlie was schizophrenic, which, and history bears me out here, he was not.  Not to say he wasn't severely disturbed, but more from a sociopathic and narcissistic angle than a truly thought-disordered human being in the schizophrenic spectrum.

During my interview with Charlie, I tried to take a social and developmental history.  For example, I inquired, "Tell me what you recall from some of the foster homes you were in as a child."  In response to my questions, Charlie used poetic language filled with metaphors and similes.  I remember him saying, "I am what you made me" - a line he had used on other occasions with other interviewers.  In fact, much of what he had to say had a certain dramatic tone and intent.  At times, his lines seemed a bit rehearsed and prepared, a soliloquy of sorts that was running commentary on how the world had abused and mistreated him.  Some might call it paranoia, if not for the realness of the abuse that actually did occur in his young childhood and adolescence (this has been documented).

I ended up seeing him maybe a half-dozen times, not getting very far with any specific facts associated with his history, motivation, or crimes.  He guarded and protected himself well through his theatric meanderings.  I could always tell if he didn't like the way the inquiry was going, because he would make some veiled or more pronnounced threat that essentially ended the discussion.  For example, at one point he said, "You know, I still have friends on the outside."  I think on this occasion, I simply glared back at him without a response and moved the topic to another area.

Because I had a lot of time as a professional in this type of environment, I too to reading the voluminous records on Charlie.  As I recall, the pile of papers was at least six-feet tall, including everything from court transcripts to social histories taken years in the past.  For what it's worth, in my professional opinion, he never did "wield the knife," but, essentially, derived satisfaction from guiding and coercing others to fulfill his murderous impulses.

Prior to working for the California Department of Corrections, I had worked for the State of Illinois at a hospital for women, many of whom had killed one or more of their children. For a period of four years, I had dwelled on what I call the "dark side," working with individuals who had committed heinous crimes.  Meeting Charlie was the culminating event that told me I couldn't do this any more.  I needed to find a job working with a healthier population.  With tongue-in-cheek, I'm fond of telling people that Charlie gave me career counseling, and I acted upon it.

There is one sentence in Dowding's article that I believe is the closest we will ever come to knowing the motive for the murders that took place in the summer of 1969.

For what it's worth, in my professional opinion, he never did "wield the knife," but, essentially, derived satisfaction from guiding and coercing others to fulfill his murderous impulses.

Here is a copy of a typical yearly review done by the prison for each prisoner, though it was written up at a later date than when this psychologist did his yearly reviews.  The information on the report is the same information notated each year. 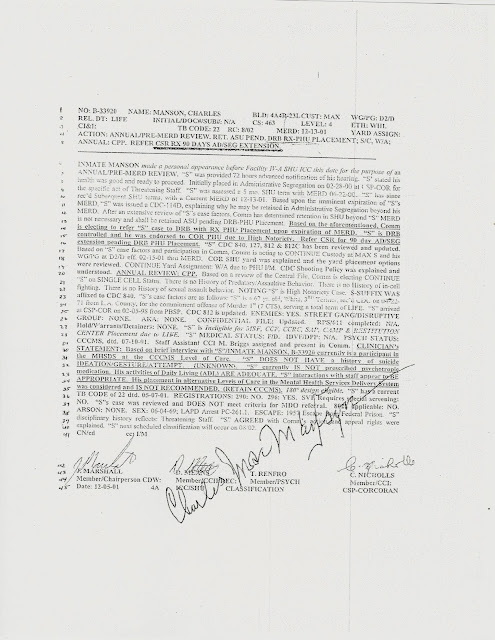