Leslie, My Name is Evil 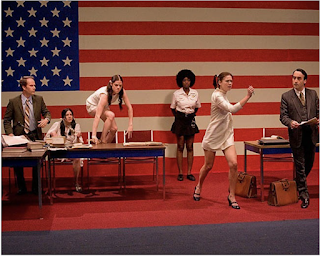 When I began the project of adding Manson films to our blog library, I didn't think I'd like many of them. Atrocious acting and Bugliosiite retellings were my presuppositions.
Bigger picture, try as I might, I've never figured out how to write reviews. My hero, Roger Ebert, kicks my ass from the grave every time I attempt to type something half as good as he published several times a week for decades. The man was a bona fide genius and a deserving Pulitzer Prize winner.
But time passes and Ebert types no more. Your consolation prize is my hot takes on a movie I should've watched a decade ago. Late date notwithstanding, I will not be restrained today.
Canadian filmmaker Reg Harkema blew my doors off with this one. His film is a visual experience that chronicles the times through the eyes of middle class suburban kids growing up in 1960's America. The soundtrack is offbeat and the editing is tight. What's up with film editors and the Manson thing anyway? Don't answer. I'm grateful. 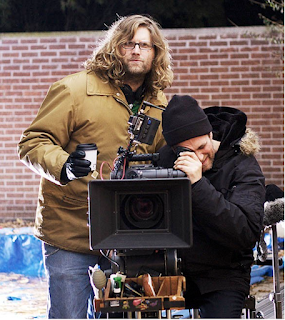 You can watch Harkema's film free of charge (with two commercials) on IMBd TV. Please tell me what you think afterward. Thanks to Jay for suggesting this film for discussion. 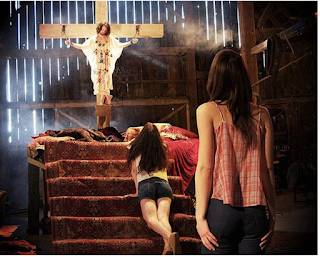 That's prostrate Sadie handing Leslie over to Charlie Jesus in case this is your first day in Manson. Mendocino was also mentioned. It's cool when a writer claims their spot at this gruesome table. Show us what you know.
A quick pitch...
Let's address the 500 lb. elephant in the room. We all know it's time for a Hawthorne movie or cable series. A solid handful of people reading this post possess the abilities to make it happen. Double digits talent doesn't sound far-fetched. I am filled to the rim with ideas. Maybe we could talk on the phone.
Max Frost must be given a role. Non negotiable.
Picture the slow motion shootout. Brass and smoke hang in the air. Cool music with lyrics in not English language blasts and then abruptly cut off as Gypsy falls into a handsome young policeman's arms, whispers, "I'm sorry," and passes out from her fifteen gunshot wounds. Cut to Larry Bailey screaming and squeezing his shattered kneecap between two bloody hands.
I don't know the actors and actresses anymore so you should pick who you like, but I'm your huckleberry if you need a socially anxious and talkative oddball to lurk in the background and agree with everything you say. From home of course.
I might get sick if I leave my room.
Let's get back to Reg Harkema while you chew on the idea. Leslie, My Name is Evil is also titled Manson, My Name is Evil. I'm not sure if the title was changed because of some crossing the border from Canada thing or what but the second title killed the first title's irony. Charlie acts more cartoon crazy than Evil with a big E, and Leslie is portrayed as a victim who mutilated Rosemary.
Small potatoes.
Like me, you probably see a Manson movie poster and say something like, "I'm going to be completely disappointed if I don't see any bloody sex ritual boobs." Rest assured, friends. Gory bosoms are included. This time in a dream sequence.
Love of brother. Vietnam. Nixon. The abortion. Harkema points out (something we talk about a lot here) that the Manson murders did not happen in a vacuum. 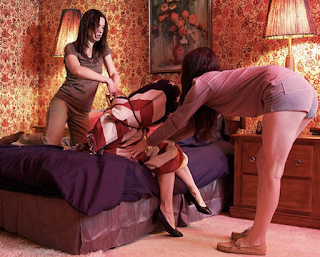 A bit of license is taken. Rosemary is wrapped in the Cielo flag.
The acting works in this film. Gregory Smith is Perry, a young juror who becomes infatuated with Leslie during the People vs Manson et al trial. Perry has a dirty dream about Leslie while sequestered in a hotel room. Kristen Hager plays Leslie. 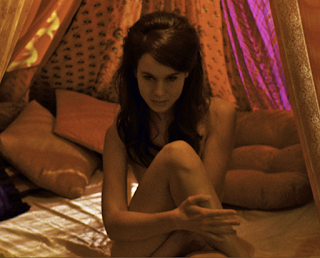 Charlie shows up in the dirty dream but Perry avoids Little Paul duties. Manson gives Perry the greenlight, albeit shirtless, and exits the scene. 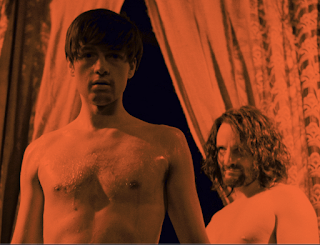 Ryan Robbins is Charlie. Robbins looks more like the Scots-Irish and English migratory blob that spawned Charlie than several of the actors who have played Manson over the years. I speak for all genealogy nerds when I say I appreciated Robbins' casting. He's also a more believable Charlie fwiw.
Anjelica Scannura plays possibly the best Sadie I've seen on this journey. Same for Tiio Horn as Katie. Their scenes jump off the screen. 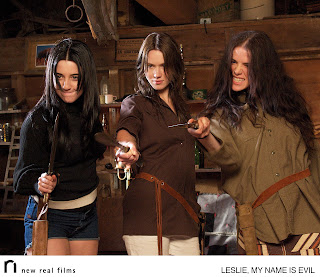 Horn as Katie says she's from a Los Angeles suburb. Later, she pronounces "again" like a Canadian. I immediately wanted a pea meal bacon sandwich from Paddington's. I miss you, Toronto.
I don't know how I'd classify this film. Dark camp comedy? I recommend it regardless. Bugs is great. Fitzgerald is hilarious. Perry's girlfriend and father possibly steal the show.
I liked Leslie, My Name is Evil so much I ordered a copy from Amazon. This one might not be for the cadre dedicated to solving the cases in their own special ways and need everything historically accurate, but the film is a solid watch for everyone familiar with the tropes, facts, and myths surrounding the Manson milieu. 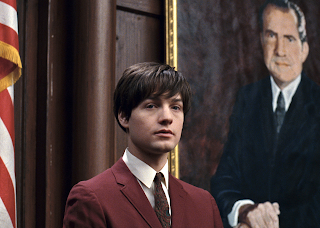 The portrait of Nixon behind Judge Older's chair is massive. I laughed when Older asks Perry from beneath the watchful eyes of the man responsible for the headline if seeing the newspaper will prejudice his opinion of Charlie. Make sure you watch hang on through the credits to hear Nixon's speech to the youth of America.
Overall, I got the feeling Reg Harkema looked at the U.S. during those times and used his film to asked a sobering question across time. How did we expect Manson not to happen?
-------------
Bonus materials:
A review I like where the reviewer says all the things I want to say but lack the skills.
Rotten Tomatoes.
-------------
We'll return to our regular scheduled programming Monday. I hope your weekend is swell.
+ggw...Ohio
Posted by G. Greene-Whyte at 9:53:00 AM 35 comments