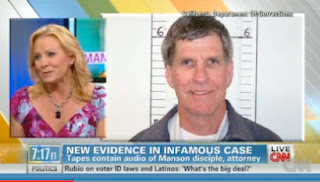 This is a good, brief, summary for those who are not exactly sure what all the hype is about regarding the “Tex Tapes." This will fill in the blanks. Casey Jordan seems to be more capable of having a reasonable conversation about this subject than most I have heard in a major media interview.  I don’t think that there will be anything new on these tapes personally, but if I am wrong?? Information which could have made a difference, and given some answers to people who have been desperately searching for them- would have been right there locked away all these years??

Dream a Little Dream of Me 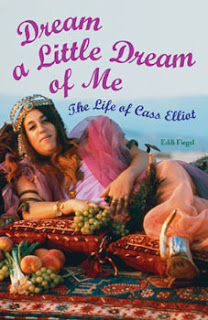 I am currently reading a biogaphy on Cass Elliot called "Dream a Little Dream of Me".
It was written by a British author by the name of Eddi Fiegel in 2005:

In contrast to the TV show, the Bubblegum album was a hit, but Cass's enjoyment of its success was to be short-lived. On August 9, 1969,Cass's friend actress Sharon Tate and three of her friends were savagely murdered at the house Tate and her husband Roman Polanski had been renting on Cielo Drive, just minutes away from Woodrow Wilson. The bodies were riddled with one hundred and two stab wounds and were found surrounded by vast reservoirs of blood. Cass had known Sharon and all three of the other victims: celebrity hairdresser Jay Sebring, Woytek Frykowski, an old school friend of Polanski's, and Frykowski's girlfriend Abigail Folger, heiress to the Folger coffee fortune. (I guess this author forgot about poor Steven Parent, the fourth victim) The openness of Hollywood society at the time had led to a previously unprecedented crossover between the film and rock communities; if you were successful and hip in either one or the other or at least good friends with someone who was, you were just as likely to end up at a film star's house for the evening as  rock star's. Cass's prominence in the upper eccelons of the Los Angeles social scene meant she was friends with rock stars such as Crosby, Nash, Stills, Eric Clapton, plus assorted Beatles and Stones, but also Warren Beatty, Roger Vadim, Jane Fonda, Roman Polanski and Sharon Tate, Mike Sarne, Dennis Hopper, and Peter Fonda.

(I am skipping around, because a lot of it is long-winded and repetitive, but I will add in the parts that were relevant to the Manson thing)

Having regularly played host to some of the less decorous characters on the scene, Cass was subjected to particularly intensive questioning by the police. Apart from having known the victims-Cass was further implicated by association. When the bodies of the victims had been discovered, the police had found the word PIG blurrily scrawled on the wall of the house in blood. John Phillips had informed the police of the widely circulating theory that what had been written was in fact PIC--in reference to Pic Dawson. Some believed this could directly point to his guilt. (I skipped again, because this author didn't have her facts straight, and she goes on to state that Folger and Frykowski used to pick up young guys on Sunset Strip, blah, blah, blah) NEXT...

Eventually, after months of rumor an speculation, both Doyle and Dawson were cleared of suspicion and Charles Manson, a thirty-five-year-old ex-convict, fraud, pimp, and conman with a Jesus fixation, and his "family" of (mostly young and female) followers were revealed as the murderers. (Just to note, this author never mentions Tex) Manson had a talent for attracting the young and dispossessed and he had somehow manage to brainwash his acolytes into accompanying him on his nihilistic quest for supposed salvation and power through murder. Manson and his followers had been frequent visitors to Cass's house, taking advantage, like so many others, of the plentiful food, drugs, and generally laid-back, hospitable atmosphere. But Cass was not the only one who played host to him and his acolytes, unaware of what would ensue. Although in the aftermath of the murders, few woud admit to any link, many prominent figures in the Los Angeles rock community had not only socialized with Manson and company--particularly his harem of young women, who made themselves readily available to anyone who was interested--but developed closer associations with them. As Neil Young later remembered, "A lot of pretty well known musicians around L.A. knew Manson, though they'd probably deny it now. The girls were always around too. They'd be right there on the couch with me, singing a song."