Bill Garretson's polygraph and his relationship with Steve Parent

In a previous post, a discussion was started regarding the possibility of some type of relationship between William Garretson and Steve Parent.

Before I get into that, let me be very clear, I support gays in every way. I support their equal rights, I support gay marriage, hell, I even support Bruce Jenner becoming a woman. So this is not about gay-bashing, or even speculation for the sake of fulfilling my secret dream of being a tabloid reporter.  What it is about is uncovering every rock we can find to make sense of what just doesn't make sense. It is also about uncovering who was at the house previous to the murders and what their relationship was to the victims.

Also, I'm acutely aware of wanting to be sensitive to Steve Parent's surviving family members. But I can't help but ask the question that I'm sure they've asked many, many times over the years: Why didn't Watson stay hidden in the bushes and let Steve pass through the gate none-the-wiser? Steve was 20 feet from freedom, 20 feet from being a witness the next morning instead of a victim that night.

So we have to ask, why did Watson stop him and kill him? As rumored, had the killers actually been watching the house and seen the car there previously? Had he assumed that it was Garretson? Let's also remember the police report notation by Steven Shannen, the Times newspaper deliveryman, who stated that "…on Wednesday, August 6, at about the same time of day (4:30-5AM) he had noted a white Dodge Dart or Rambler sedan parked on the west side of Cielo, just outside the gate. He was not sure of the make of the vehicle, but stated that it had black-wall tires." Steve Parent drove a Rambler with black-wall tires.

The odds of this Dart/Rambler not being Parent's must be very high considering that the police never found anyone admitting to being at the house with a similar car. They weren't the best cops, but I'm sure they ruled out the gardeners, the pool man, and the men working on the nursery and any other frequenters to the house or the Kott's house as the owners of the suspicious car.

Now, let's look at Garretson while he's in police custody. I'm sure the detectives really wanted Garretson to be their man. It was just too good for him not to be, and how nice to wrap this case up within 48 hours. So, they made the following observations in the 1st police report: "In the opinion of the investigating officers and by the S.I.D., it is highly unlikely that Garretson was not aware of the screams, gunshots or other turmoil…these findings, however, did not absolutely preclude the fact that Garretson did not hear or see an events connected with the homicide."

The report also went on to note: "It is the investigators' opinion that Garretson was under the residual effects of some type of narcotic during the entire time he was in police custody. It's possible, but not probable that Garretson had no real knowledge of the crime."

Then we have Garretson's polygraph examination. In a previous post someone posted that Garretson passed his polygraph. But the bottom line is, Garretson didn't "pass" his polygraph, it was inconclusive in part due to what they thought was residual drug effect and in part over his evasive answers to certain questions. Burdick, the officer questioning Garretson even notes this during the exam.

Now before everyone starts screaming about polygraphs, here's what we know - unless both parties stipulate otherwise, they are inadmissible as evidence and in court because they're unreliable. What they are useful for is indicators - if someone refuses to take a polygraph, like O.J. Simpson, it can indicate guilt and lead detectives in the right direction. If like Garretson, they're inconclusive, the detective may think he's lying and dig further, but at the time, there's not much he can do to prove it unless he can get a confession from the suspect, which Burdick tried to do.

So, even if the administrator detects untruthfulness, they can't hold the suspect for longer than 48 hours on probable cause. Therefore, even if Garretson's polygraph was inconclusive, without a confession, they still have to release him after 48 hours. 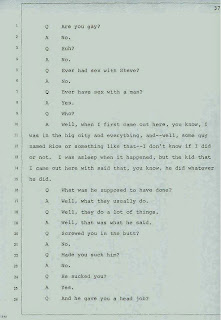 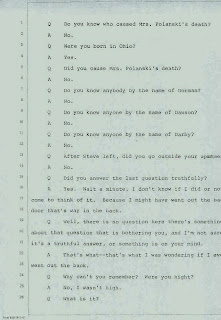 Again, this isn't really about anyone caring if Garretson and Parent fooled around that night, or any night, it's about the events leading up to and after the crimes. What is very clear is that Garretson was scared, for unexplainable reasons, on page 48 Burdick asks, "Is there something right now that's on your mind that you don't want to disclose?" And Garretson replies, "All I can say is I was really afraid that night." And that evasiveness is what gives Burdick pause to later question Garretson's honesty.

Below, on Pg 66 when Burdick starts questioning Garretson about going outside, Burdick says, "Well, there is no question here there's something about the question that is bothering you and I'm not sure it's a truthful answer, or something is on your mind: 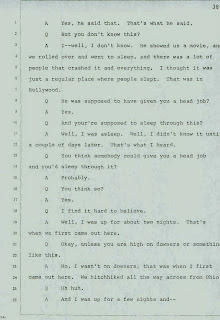 Later, on page 70 Burdick tells Garretson, "I want you to sit here and think for a minute. Looks like there's something you're holding back." Whether it's about Steve or looking in that window or what it is, I don't know.” 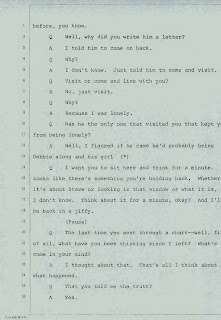 And that brings us back around to the importance of the Garretson/Parent relationship even if that relationship was just friends. Had Steve been there previously and parked outside the gate as someone not familiar with the grounds might do on their initial visits? And on a 2 - 4th trip had he felt comfortable enough to drive through the gate that Friday night? And if they had met previously, why was Garretson hiding this fact? Was he hiding something important to the case or was he simply too embarrassed to admit he'd had an intimate relationship with Parent? And how the hell does Garretson end up at the house on Cielo to begin with? I mean, he meets Altobelli on the strip in Hollywood and says during the polygraph interrogation that Altobelli asks him to stay there - Garretson comments, "He said the dogs liked me and everything and wanted to know if..." If Altobelli got a sense that his dogs liked Garretson, it seems indicative that he'd been up there on previous occasions. Even in the free-lovin' 60's, I would think most people put more thought into who took care of their precious animals than a one-time-hitchhiker.

We know for a fact that Altobelli was gay and this seems to me like a gay pick up if ever there was one. It's a shame Burdick never asked if he had sex with Altobelli.

Then, later in the polygraph (see Pg 55, below) Burdick asks him:

Q: And he surprised you?
A: Well, he didn't surprise me that he came, just that you know--I mean he came up to visit me and when he left, you know, that's horrible. 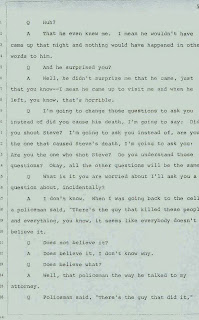 At the end of the day, I think those are the questions that haunts everyone and the question I’ll present to all of you: What information was Garretson hiding from Burdick and why? 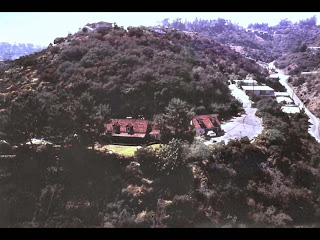 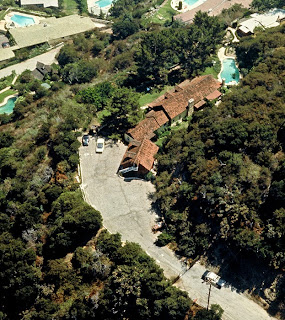