This is a transcription of a probation report for Steve Grogan dated June 30, 1970. It was ordered by the court after Grogan pleaded guilty to Section 10551 of the vehicle code (driving without the owner's consent) involving a truck he had rented from Doug's U-Rent in Woodland Hills CA. Grogan had not been charged in the murder of Shorty Shea as of the date of the report. 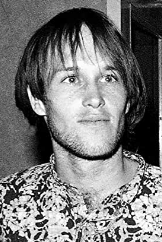 The report has a lot of background information on Grogan, there are details about him that I bet you never knew. It also explains the indecent exposure charge that led to him being committed to Camarillo State Hospital for observation. Grogan was charged with child molestation as well but the report does not address the molestation charge. The bottom line is that Grogan was not tried, much less convicted of either of the charges. The incident happened at his parents' home with adults present on June 11 1969. Ventura County terminated the case February 17 1970.

I've typed this report because it is not a great copy and is difficult to read but I'm also supplying a link to the actual report so that you can see I've faithfully transcribed it. 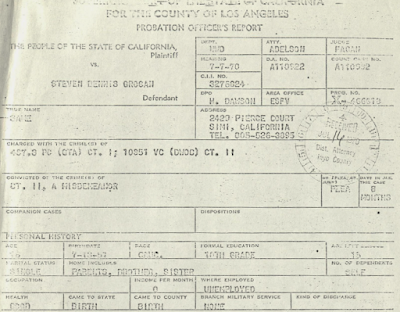 FOR THE COUNTY OF LOS ANGELES

Defendant was born in Van Nuys, where he lived with his family until his early teenage years. Defendant last attended school at Simi High School, which he left after the 10th grade, at age 15. Defendant ran off with a young woman and lived with her for the next year. Upon his release from custody the defendant wants to try to get into college. He hopes to study communications or music.

Defendant's father works for Holiday Hardware, Santa Susana. His mother is a registered nurse who is in college and studying social work. Defendant's 22-year-old brother and 15-year-old sister live with their parents. He also has a brother who is in the Highway Patrol Academy in Sacramento.

Defendant has never been married nor has he fathered any children. He has not served in the Armed Forces and has not registered with the draft board.

Until his arrest the defendant had worked as a ranch hand at the Spahn Ranch in Chatsworth. He received only board and room for his work. The defendant worked there since he was 16-years-old. It was there that he met and became associated with the "Manson Clan." Defendant has also worked as a service station attendant (for two months); a painter (periodically for six months); and a packer. At present the defendant has neither debts nor assets nor income.

Defendant says he has used marijuana frequently in the past. He does not use alcoholic beverages.

(Ventura County Probation Department referred the defendant to Camarillo State Hospital for observation. The defendant escaped from the hospital after being there for only a few days. The probation case was terminated on February 17, 1970. Defendant said that his offense occurred while he was visiting his parents' home. He was wearing rat-eaten trousers with a large hole in them. He said his genitals accidentally became partially exposed while he was playing with the children. The mother of one of the children observed this, and after talking to her neighbors called the police. The defendant categorically denies that he deliberately exposed himself.)

On June 3, 1970 defendant appeared in Department-D of the Los Angeles Superior Court and entered a plea of guilty to the charge of violating section 10851 of the vehicle code (driving without owners consent), deemed a misdemeanor, matter has been continued to instant case for probation and sentence hearing.

The deputy probation officer assigned to this case has not been able to obtain a transcript of the preliminary hearing. From the district attorney's file, the following appears to have occurred:

On October 4, 1969 the defendant rented a 1966 one-ton truck from Doug's U-Rent, 20956 Ventura Boulevard, Woodland Hills. Rental period was for one day. Defendant did not return the truck. The truck was recovered by the highway patrol in Death Valley on October 14, 1969. The truck has been returned to the owners. Defendant rented the truck under an assumed name, Tufts.

Defendant's written statement is attached to this court report. He writes that he rented the truck knowing that he could not possibly return it within 24 hours. Defendant writes, in part, "Now I know this was wrong, but at the time I was not thinking, and this is the price I have to pay. If I was granted one more chance, this mistake will never happen again. I plan to go back, and live with my parents and go to school and try to work my way through college."

Defendant told the probation officer that he rented the truck to deliver food and camping equipment to Charles Manson and others who had gone to the desert. They gave him money and asked him to buy various items and bring them to Death Valley. On the way there the truck got stuck in sand and rocks. The defendant said he was unable to get it out. He said he neglected to summon help immediately or to inform the owners of the truck's condition. Several days later the defendant was arrested.

Regarding the future, the defendant said he will try to get into college. He wants to return to the home of his parents and stay there. The defendant realizes that his present troubles have been caused, for the most part, by his association with less than desirable companions. Defendant categorically denies involvement in any further criminal activities. He also said that he was not a member of any "Family." He was living at Spahn Ranch before Charles Manson moved there. Defendant denies that he was a follower of Charles Manson in any fashion.

Doug's U-Rent informed the probation officer that the defendant made full restitution for the damage to the truck and the expense incurred in its transportation. This restitution amounted to something over $700.

Defendant's father said he would like to have his son return home. He said the door has always been open for his son. The defendant has been away from his home since he was 15-years-old. Regarding the defendant's emotional condition, his father believes he is emotionally balanced. He said his son has always been a very idealistic boy. The probation office asked the defendant's father concerning the charge of child molesting and indecent exposure in Ventura County on June 11, 1969. The father believes that the exposure was unintentional. He said his son always liked children and has never shown any signs that he would do harm to them.

Attached to this report is a letter from the investigating police detective.

The defendant left home at age 15. For a year he lived with a woman six years his senior. When he was 16 years old he went to live at the Spahn Ranch, where he was given board and room for the work he did. Defendant has lived without adequate supervision for the past three years.

Defendant appeared to be quite cooperative during probation investigation. Probation officer could discover no signs of emotional imbalance. Regarding the present offense, the defendant is fully admitting that he could have obtained help to free the truck so that it could be returned to the owners. Defendant has made full restitution for the financial damage to Doug's U-Rent.

The defendant's offense has been deemed a misdemeanor. At the time of his sentencing, the defendant will have spent approximately eight months in custody.

The best plan for the defendant would be to place him under supervision. He should be required by the court to remain in the home of his parents until allowed by the probation officer to move to a different residence. Hopefully, this will have the effect of removing the defendant from associating with less than desirable companions. Certainly such association is a major factor in the defendant's involvement in the present offense. Furthermore the defendant should be required to seek and maintain full-time employment or school.

It is therefore recommended that probation be granted under the following terms and conditions:

6. Not use or possess any narcotics or narcotic paraphernalia and stay away from places where addicts congregate.

7. Not associate with known narcotic users or sellers.

15. Seek and maintain employment as approved by probation officer.

19. Obey all laws, orders, rules and regulations of the probation department and of the court.

Maintain residence in the home of his parents until allowed to change that residence by the probation officer.

I have read and considered the foregoing report of the probation officer.

Judge of the Superior Court.